There's a word I've been struggling with trying to parse. I have heard it in a couple of situations, and one time I decided it was "yattsukeri". Now I know it isn't so.

Whatever the word is, they translate it as "Charge!" Tsubasa uses it at least three times in the fifth episode of the third Ranma 1/2 series. Please, someone, tell me what the damned thing is!

Now it sounds like "totsugeri". The dictionary tells me that totsugeki is a noun meaning "assault" but I'm having a hard time believing that's it.

What is it? Please, please?

By the way, of all the weird characters in this series so far, Tsubasa really takes the cake. And that is really saying something. Ye Gods...

UPDATE: What happens when Happosai meets Tsubasa? I'm afraid to find out, but I'm sure it'll happen.

UPDATE: This is a very strange scene. 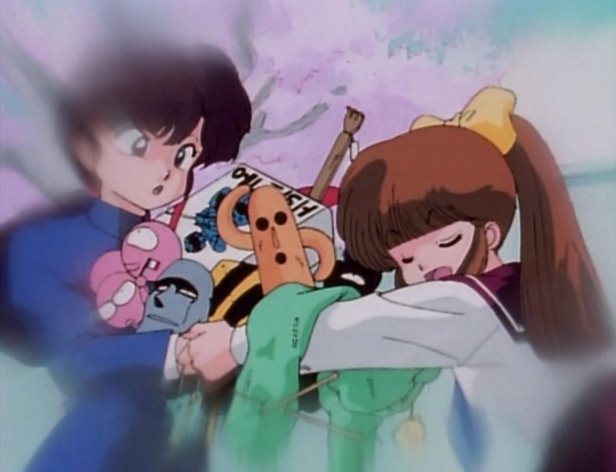 Here's why: They're both cross-dressers. Ukkyo, the guy on the left, is actually a girl. Tsubasa, the girl on the right, is actually a guy. And for the weirdness cherry-on-top, Tsubasa's seiyuu is a woman.

UPDATE: I have to confess that I really enjoyed this episode a lot. One big reason is that it's so over-the-top loony, but an even bigger reason is because the seiyuu doing Tsubasa's voice is having such a great time with the role.