And the story is about a befriending that needs to happen. Of course. (The motto of this canon is "Friendship through superior firepower".)

Filling in some gaps, I think what's going on is that Team Nakajima in the course of two or three world tournaments has become a major name and gained lots of fans and attention, because of the outstanding performance of Vivio, Einhart, Rio, and Corona. Lots of people coming to them trying to join, and so Nove has opened a gym, "Nakajima Gym", which includes basic exercise equipment but also has martial arts training. Nove runs the place, and her star martial arts team is Corona, Vivio, Einhart, Rio, and Miura. And Yumina Enclave, who isn't a fighter, seems involved too.

(Miura moving over makes sense. As good as she's gotten she probably can't really train with the other students studying with Vita and Zafira. In Team Nakajima there are several who are at her level that she can reasonably train with.)

The main character is a girl named Fuuka. She's had a hard life, living in an orphanage and living in the lower strata of society. She's learned to fight out of self preservation. In the orphanage she had a friend named Rinne.

Rinne got adopted by a rich family, and she changed. She became cold and dark, and no longer acted as if Fuka was her friend. Fuka, meanwhile, has grown up and is trying to survive but is having a hard time doing so because she keeps getting into fights, and keeps losing her jobs. In the most recent incident she seems to have been fighting to save a couple of co-workers, and she got hurt pretty badly. 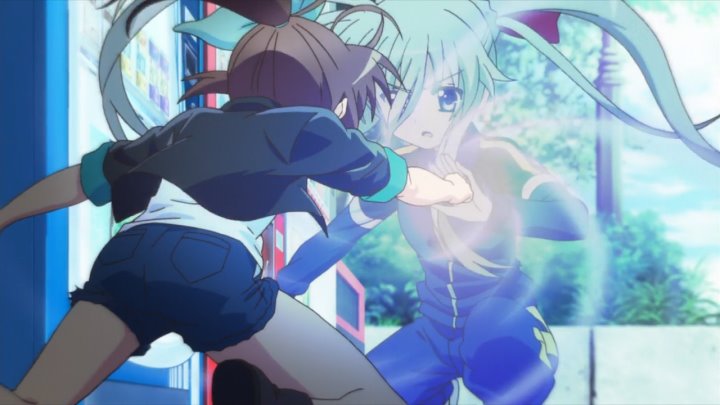 Einhart is out running and finds her. Being mostly out of it, Fuka tries to hit Einhart with a magically enhanced punch. Einhart blocks it but is impressed by the power of the blow. Then Fuka passes out. One hospital scene later, and Fuka being fired from her latest job, and the doctor gives her a note from Einhart telling her to come visit the Nakajima gym. 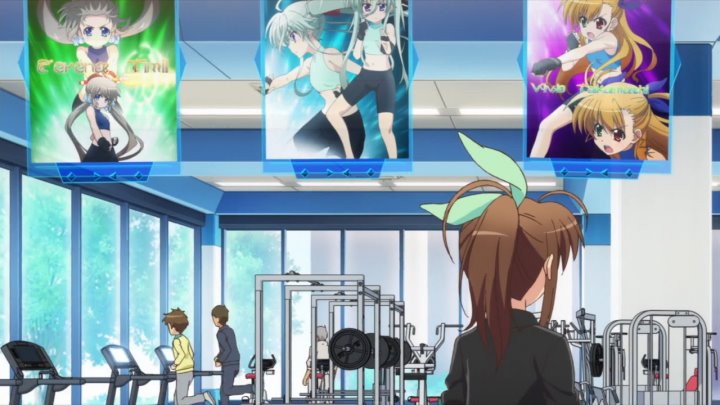 So we get some angst (not much) and some back story, and some fighting, and Fuka gets hired to work in the gym, in exchange for food and board and a bit of pocket money. And her job is to be a sparring partner. 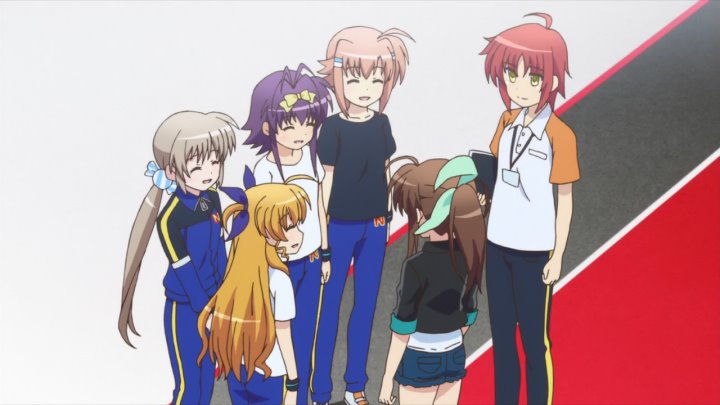 Rinne, meanwhile, has gotten extraordinarily good at martial arts and has a record of 157 wins out of 158 matches. Her only loss was to Vivio in the most recent tournament, and Einhart won the under 15 world championship. (There's some confusion about this in the translation I watched. Both Einhart and Rinne are described as the under-15 champion. I suspect that Rinne was the champion but lost that title to Einhart in the most recent tournament.)

The series story is obvious: Fuka has to become strong enough to defeat Rinne, and in so doing will revive their friendship. She's going to do that by studying the Hegemon-stye with Einhart, evidently the first student Einhart has taken in. And then she'll enter the world tournament and fight her way up the ranks far enough to meet Rinne in the ring. (Or, maybe, fighting in the street in their old neighborhood. The ED is ambiguous about that; it shows them fighting in the street but it also shows them fighting in a ring.) 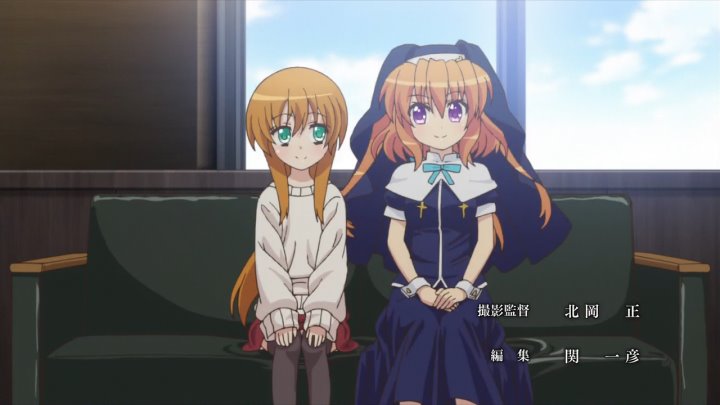 The ED has flashes of characters we know from Vivid: Victoria, Hallie, Sieg, Els, Chantez, and Ixpellia, who is awake again and full-sized.

Based on the first episode I think it's going to be pretty good, at least for a fan of the canon. No world crisis, nothing like that. But ultimately the real story of every series in the canon is about befriending, and this one will be true to that. 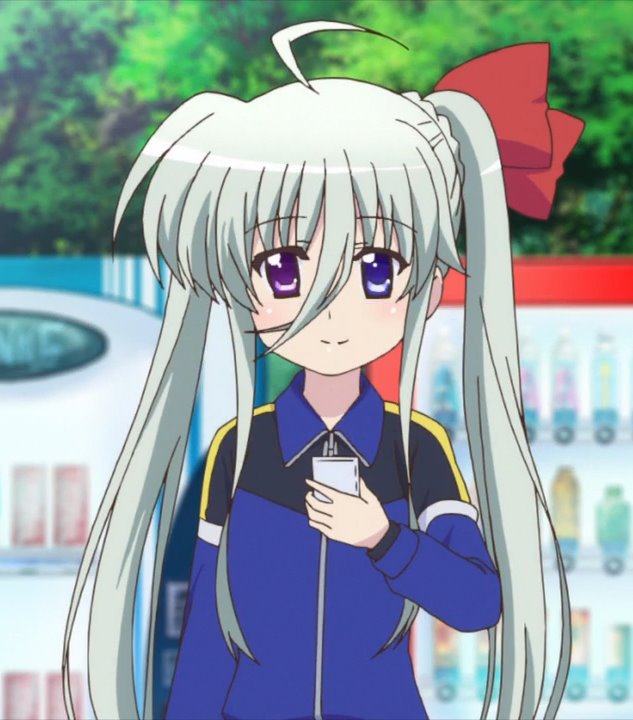 I think it's two years since Vivid. Yumina and Einhart are shown wearing the same school uniform as they wore in Vivid, when they were both first year middle school. So it can't be more than two years.

There are other hints. One is that Einhart wears a bra now... I don't think this is going to be a fan service show, but they give us a closeup. (Oh, dear.)

2 Maybe one year? A year and a half? The web site says that Vivio is in 5th grade, compared to 4th grade in Vivid.

I went through and Google-translated the other character profiles and it seems like this takes place after the second tournament that they all enter. With a full year of training after the first one, they clearly all have improved a great deal, and they all do very, very well. (Like Vivio defeating Rinne and ending her undefeated winning streak.)

Anyway, it says that Yumina and Einhart are both second year middle school and Rio, Corona, and Vivio are all fifth grade. So this is probably about a year and a half after Vivid.

It is kind of subtle but all of them are wearing power-draining bands when Fuka fights them, so she's going to have a surprise coming when they fix her with a set.

Also, she doesn't know about Vivio and Einhart's adult modes.

I wonder who is going to make an intelligent device for her? My bet is that it will be Yumina.

4 I might catch up on Nanoha if this season is otherwise a wash-out.  I've only watched the original series, so there's plenty to go on with.

5 The A's movie is better than the A's TV series! There's an entire plotline from the TV series which they dropped, and it was stupid. Leaving it out made the story better.

6 I second that emotion.  Actually, both movies are better than their related series.  At least, in my mind.

Now if only upcoming third movie would cover my favorite of the franchise, StrikerS, I'd be thrilled.  Still, the reportedly all-original story can't help but be cool, right?