At least I think that's what Megumi says in this scene, echoing back what she just heard Belldandy say: 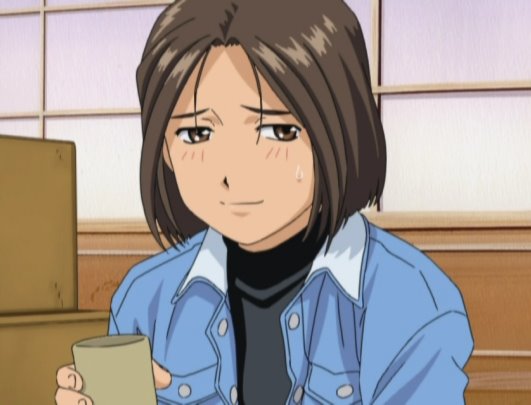 UPDATE: I'm rewatching this in part so as to plunder it for frame grabs to update the top rotation again. Since it's widescreen I was afraid I wouldn't get many images, but in fact I've been getting quite a few. I was also afraid it was going to end up being a one-trick pony -- Urd, Urd, Urd, Urd and spam -- but I was wrong.

In particular, we also have Mara, demon first class and holder of an advanced degree from the Department of Fiendishly Elaborate Plans of the Wile E. Coyote University. Or maybe that's "Department of Elaborately Fiendish Plans". 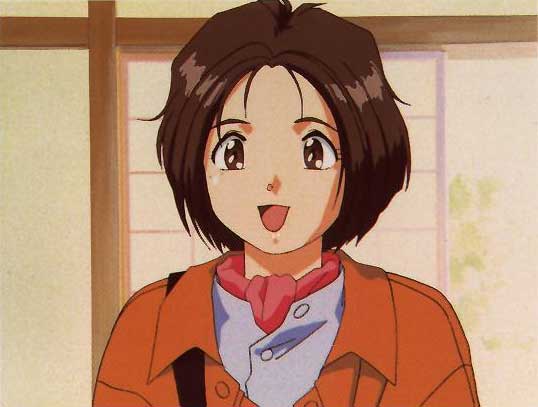 2 That thing is hideous. Where did it come from?

...I couldn't believe the people who fansubbed the first TV series did that. Jeeze-louise. How hard is it to use Google??

That thing is hideous. Where did it come from?

And prior to that, the original OVA.

I don't see what's hideous about it (apart from the image quality).  Megumi is supposed to be a 19-year-old girl, not a 38-year-old transvestite.

They used "Marller" in the official subtitle, too, and it's still wrong.

Maybe I could be convinced that her name is "Marla", but most fan sites for the manga list her as "Mara" and that's what I go with.

Pixy, that picture is from the OVA, isn't it? Gad that sucked, including the art.

The TV series inherited its character designs from the movie, as well as a lot of its visual concepts e.g. what heaven looks like, what the internals of the computer system look like. Mara wasn't in the movie, but they used the same basic approach for her. Megumi was in the movie, albeit only in a cameo.

I personally prefer the new art.

This site is pretty close to being canon for the series. It's true that the character art for the new TV series (and the movie) is changed relative to the manga, and that the original OVA was closer to the manga, but the manga art gives everyone very round faces, which makes them all look young. In the movie/TV art they've changed the body proportions and face shapes to make everyone look more adult.

Matter of personal taste, I guess.

7 Like a lot of the show's characters; Mara is a name with roots in mythology:
http://en.wikipedia.org/wiki/Mara
Mara is the right romanization for the name.

Gad that sucked, including the art.

Now, part of this is that the OVA compressed at least five volumes of manga down to five episodes.  Part of it is that I saw the OVA back around 1995, when it first came out, and then read the manga, and then watched the movie, and then didn't watch the TV series.

And part of it is that you're just wrong.  The character designs for the TV series are off-model, inappropriate, and ugly.  All the characters are very young.  Megumi has just started college at the start of the story - she's only 18.  Keiichi is only a year or so older.  If that's an 18-year-old in your picture, she needs to book herself into detox, pronto.

9 That particular picture of Megumi is not a representative one. It isn't fair to judge her from it.

Hey, my fansub says her name is "Marller"! Where did "Mara" come from??

"Mara" comes originally from the manga (the Dark Horse release). I checked two volumes, and they both spell it that way.

11 I've seen other pictures of TV Megumi, and they are less worse, it's true. Sometimes she only looks to be in her late twenties.

Like a lot of the show's characters; Mara is a name with roots in mythology:
http://en.wikipedia.org/wiki/Mara

Cool.  I'd never bothered to look that up.  Hild also comes from Norse mythology.  The only reference I could find to Peorth was this:

Pertho: The 14th rune of the Elder Futhark, representing the letter p.

The traditional meaning of this rune has not been established, but various suggestions have been made, including "secret" and "chess piece." This is the sixth rune of the second aett and it is one of the most obscure runes in the futhark.... In a reading, Pertho usually has esoteric meanings relating, for example, to an initiation experience or to the discovery of a hidden aspect within oneself.

(Peorth was given as an alternate spelling.)

While I prefer the AMG! TV series, there's a soft spot in my heart for the OVA... it was the second piece of anime I ever saw, after all, and back then it was the bee's knees.  With the limits they were given (5 volumes in 5 episodes), I thought it was pretty good (and still do).

I'll agree with Pixy: even though I know Megumi is the younger sister, I kept thinking her older that Keiichi.

14 Like most old-guard otaku I saw O!MG! OVA first, then read the manga, then saw the later stuff. So I actually know that it's supposed to me "Mara"....bad me for not making that more apparent.
Back when the OVA was IT, I kept wishing there was more O!MG! animated. I'm glad there is, even if they DID misspell Mara's name.
My big complaint is that Belldandy is not perfect in every cel. She's supposed to be--she's a GODDESS for crying out loud!

15 Looks like I'll have to do the {blockquote} manually:
The character designs for OMG TV suck
From Pixy. Everything I've ever seen about OMG makes me think ''Nah, not for me''. If I dislike the artwork, the story has A LOT to overcome...