"Provenance" is a cool word; it's a pleasure to find a use for it. Though it's far from being a perfect series, some of the ideas presented in Suzumiya Haruhi no Yuutsu are intriguing and have led to enormous fan speculation.

One big question is, who is Asahina Mikuru really? 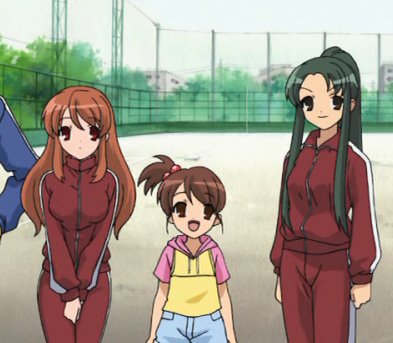 Of course, there's no requirement that she be anyone in particular other than just a random person from the future who was selected as an agent by the time travelers, probably because of how she looks. But in a series like this there can be coincidences -- or things which turn out not to be coincidence. And so fans speculate that she's related to someone-or-other.

I myself thought that the most likely answer was that she was the daughter of Kyon and Haruhi, but some fans speculate that Mikuru is actually Kyon's younger sister.

The hair color is slightly different, but that doesn't prove anything. A lot of people's hair changes color as they grow up, and in any case there is such a thing as hair dye.

The hint that proponents of this theory use is that the older version of Mikuru does a "boy am I dumb" gesture involving winking an eye and knocking a fist on her skull and sticking out her tongue, and shortly thereafter we see Kyon's imouto do exactly the same gesture.

That alone wouldn't be persuasive. However, I noticed that they have the same eyes. Mikuru and Imouto's eyes are different from LOL Fang-tan next to Imouto, but they're the same as each other.

Another bit of evidence: in "Lone Island Syndrome" Mikuru is surprised to discover that seawater is salty, which strongly implies that that's the first time she's been to a beach.  Is it plausible that Kyon's sister hasn't been to a beach, and won't go to one at any time in the next few years?

The resemblances between Mikuru and Kyon's sister are probably hinting at a family connection between them; the idea that they're the same person, however, strains my suspension of disbelief to breaking point ...

2 So eyes the same, hair different, similiar behavior, and we go back to the idea that Mikuru is Kyon's daughter, who learned the head-knock gesture from her aunt. That also fits with the things you mentioned.

I really don't buy either theory.   In the middle novels, adult Mikuru playfully suggests that Kyon take certain liberties (such as stealing a kiss) with the unconcious young Mikuru.  Which would be weird if she's his niece.  On the other hand, this is the Japanese we're talking about... but overall, I think the whole idea is built on wishful thinking and gossamer threads.  She might be a distant descendant, meeting her legendary great- great-grandfather at best.  Finding that she's attracted to him but knowing she can't act on it (because she knows his future history) could account for some of her actions.  The part I find curious is that she had never been on a day-to with anyone prior to the first Saturday afternoon club meeting.  This suggests a very structured or restrictive environment; perhaps a controlling parent (like Haruhi?)

4 Random thought, but how does that work from within the show's depictions of time travel? Basically, Mikuru explains that time cleaves into separate "chunks", and that time travelers can cross into a different chunk without worrying about stepping on an ant and changing the course of history. But she also explains that they detected what happened to Haruhi three years ago, and that's why they sent Mikuru; also, that it's no longer possible to travel back beyond the Haruhi-generating event.

So question one is - if Mikuru is in Haruhi and Kyon's line of descent, how the heck did she exist at all? Assuming that a "normal" Haruhi and Kyon wouldn't have gotten together in the first place, much less reproduced, that means the "normal", unaffected timeline won't actually include anyone descended from them.

This doesn't prove the kid theory wrong, though, because we don't know how big those chunks are. It's entirely possible that it's long enough for the kids to come into existence and grow up (or rather, since Haruhi's certainly not going to stand for her kids not existing, she'd MAKE them exist...)

The age thing isn't really a bar either. Time travelers, right? Wouldn't be hard for one of them to pick someone up for training, and if you were trying to prep an agent for long-term surveillance of something like Haruhi, her own kid wouldn't be a bad choice; at the very least she'd be very unlikely to will your agent out of existence. (Of course, that means that Kyon's sister is another possibility, but would an in-law be as safe? ;p)

I don't think it's the sister, though, because she knows Yuki. Mikuru was surprised to find Yuki there, and Yuki scares the heck out of her. This wouldn't be the case if it was "Yuki-oneesan from back then"... unless Yuki does something extraordinary scary in between "then" and "now".

5 Just making sure this works, first...

6 Pixy, why is Tatterdemalian's spoiler just above this showing in clear on the comments preview sidebar?

7 Okay, then... assuming that Haruhi and/or Kyon have the power to alter reality without even realizing it, how can we be so sure that they aren't using their powers to reprogram everyones' memories, also without realizing it? For all we know, the time travellers could have sprung into existence in the Event three years before, and the future and past they think they know have actually been created and rewritten on the fly by the Power ever since.

8 Sorry, folks, I'm going to freeze this thread so as to preserve evidence for Pixy to work on.

9 Pixy seems to have fixed the problem, so this thread is open again.

10 Sorry about that... I saw my post was inside the spoiler block, and didn't think to check the sidebar as well.

Not your fault. I posted this the other day over at Brickmuppet's:

That's what it means to be part of a "beta". We have been turning up problems, and that's exactly what Pixy hoped we'd do. It's the reason he offered us free use of the system.

Better by far to find those problems now than to have them turn up after this place gets established with hundreds of paying customers.

We are what are known as "black box" testers. The opposite is "white box" testing, which means that the tester understands the internals and is deliberately shooting for the places where problems are most likely to be found. Pixy has been doing his own white box testing.

But there's no substitute for black-box testing. "Black Box" testers don't know what's going on in the code so they attack with less predictability, across a wider front. To some extent a white box tester is limited by his preconceptions, but black box testers have no such limitations and will find some of the damndest things. I speak as a software developer myself when I describe this, and believe me, black box testing is essential.

So don't apologize for making things break. I haven't been. We have been doing exactly what Pixy hoped we'd do: to use the system heavily and to turn up problems he himself can't find.

Of course, that's not to say that we should be acting like vandals. That's not the point. But if we're using the system as it's intended to be used, and if we turn up things that don't behave as they should, that is A Good Thing.

And we have been -- "we" in this case being my commenting readers and myself. We've found a lot of stuff.

13 Yep.  This was a minor oversight on my part, easily fixed - but it was a bug, and not any error on your part, Tatterdemalian.

14 The other part of our job as beta testers is to keep our eyes open for problems, to bring them to Pixy's attention, and not to get huffy about them.

15 And now that the bug's fixed ...
Avatar, it wouldn't be difficult for time travelers to recruit an agent from the present, but what would the advantage be in doing so?  The only one I can think of is, an agent from the present has a legal identity in the present for free, where one from a different time has to establish one (or fake one), which takes non-trivial effort.  But that one can't apply in Mikuru's case -- whoever she really is, the ID "Mikuru Asahina, student at North High" is fabricated.

Moreover, any time traveler whatsoever has to be careful about self-interactions (as Mikuru's older self is.)  If Kyon's sister grows up into Mikuru, every meeting between those two characters is fraught with the peril of paradoxes.

Finally, what makes you think there was ever a "normal" timeline in which time travelers existed and Haruhi didn't?

16 The biggest advantage is that Haruhi is dangerous to -anybody-; she can literally cause you to no longer exist, possibly without even noticing she did it. Her latent power, in the context of the show, is essentially without limit. Forget accidental kill-your-grandfather stuff, a mishandled Haruhi will end the entire world (and damn near did.)

That said, having a Haruhi-relative isn't any more dangerous, proportionately speaking. Kind of like jumping out of an airplane with no parachute - doing it naked doesn't actually increase the danger much... But a Haruhi-relative is possibly protected from Haruhi's power, if for no other reason than they will eventually be important to Haruhi. Especially if it's her daughter (or grandchild), that's a not-insignificant factor. There's always the chance that future-Haruhi can maintain their existence even over past-Haruhi's objection, knowingly or not.

We know that Haruhi's awakening was an "event" in that Mikuru describes it as something that happened, and then time travel backward past that event became impossible; if it had "always happened", then time travel would have always had that same limit on it, not suddenly been okay with it and then stopped. The way they describe the time stream, it's entirely possible that the Haruhi-event could make significant changes in her bit of time without screwing up the future. (But would the future survive a total end of the past world? Good question, that.)

The biggest reason against the child-of-Haruhi argument is that Asahina(big) flirts a bit with Kyon. Granted, growing up in the Suzumiya household (I can't see her taking his name... not that we know what it is! ;p) would be a little weird, but weird enough to make you comfortable with flirting with your dad? Ehhh. Then again, only boys in my household...

17 There's your bug again - and I'll bet it's because I forgot to close the spoiler tag. Sorry...

18 Yeeeah.  If you don't close a tag, the BBCode engine automatically makes things right.  But the despoileriser is just a regexp, and doesn't know any better.  Though... Yeah, that should work.

20 You know, warnings about it being overrated aside, commentary on this site is making me want to check out Haruhi when it comes out on DVD. . .

21 It's not a waste of time. It's a decent series. But it doesn't really live up to the hype that was flying around last year. And there are better things out there (e.g. Shingu).