Samurai Classic I'm not sure what movie it's from, but it's apparently a classic.

At one point in Shingu someone is watching a samurai flick on TV, and this scene goes by: 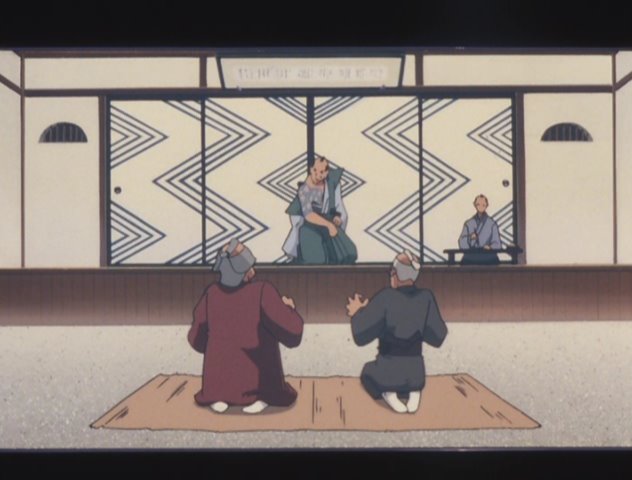 I know that it must be a classic, because Sarara in Bottle Fairy has seen it: 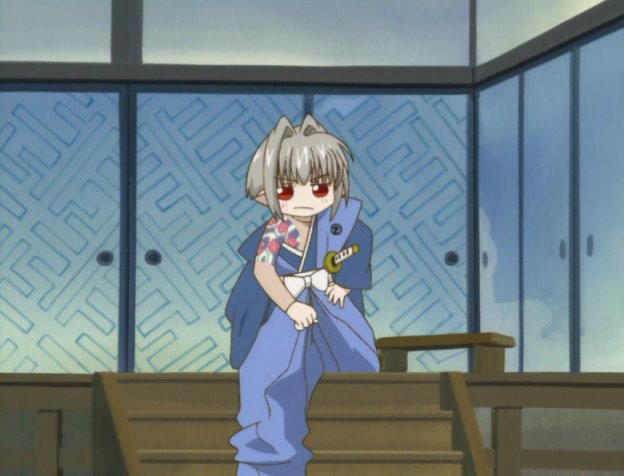 1 Thus reinforcing my belief that Sarara > All Other Bottle Fairies.

2 Actually this may be a certain 'standard stance.' Check up on some iaido books, the position of the right wrist looks like it's being kept close-by to grasp the hilt in a 'standard' iaido draw. 'Standard' as in, the hand position it moves to - the forearm nearly horizontal and wrist maximally flexed to near vertical at the moment the hilt is grasped - is used in at least six of the first level basic iaido kata. (iirc.) OT: Iaido moves comically show up all over anime, just like green space aliens who eat with hashi (of course!!) Scrapped princess: The main dude (forgot his name) re-sheathes his very WESTERN, straight sworg with a traditional Japanese no-to move. Also, the lizard-captain in Outlaw star uses a close quarters iaido draw (I think it's kata #6) the one where you nail your opponent under his ribs with the pommel, step back and complete the draw/cut.

3 It's not an iaido pose, it's a traditional "I am now passing judgment" pose. I've seen a few parodies of it (IIRC, oldest I can recall was in SMJ). Dunno if there was a famous shot in cinema that everyone else is twigging from, but the tattoos suggest it...

4 The significance of the picture is the tattoo on the shoulder. It's a mark by which those guys in front finally recognize the one with the tattoo as having been in a certain place, at a certain time, just having killed a certain person.

5 I believe the show is called Tōyama no Kin-san.  It is a LONG running TV series, plus movies.  The character disguises himself as a commoner to mingle with the riff-raff and when the perps in the foreground come face to face with him in his role as official judge/investigator of the Shogunate, they don't recognize him.  As he speaks they are agog as how much he knows and usually try to deny everything, at which point he reveals the tattoo (which they have previously seen while he was in disguise) and they realize they're hosed.
A simple setup, but since the show has run for about a million episodes, I guess folks like it.

6 Bah, it's from Most Extreme Elimination Challenge.

7 Someone should start offering the cultural background courses. How else are we supposed to know their Star Wars moments with the tatoos?

Actually, they do some of it. After seeing Magical Shopping Arcade Abenobashi, I asked Ana-chan if she knew who Abeno Seimei was (she didn't watch Abenobashi). Well, she did, and she offered a veritable stack of trivia about him. So I guess they do teach them something in these J studies programs after all.

Another such moment was some time ago when Ana-chan was writing a paper about Iron Chef and its cultural significance, so I interviewed carriers of native knowledge. It was quite curious.

8 The fansubbed version of Bottle Fairies confirms that it's Touyama no Kin-san (the note occurs at 4:13).