So the very first show of this season that I've seen come by was also one I was vaguely curious about. Having nothing better to do, I downloaded Rio -- Rainbow Gate.

For a change we have a show with gorgeous women who are dressed in fetish costumes and it makes sense. Most of the show happens in a casino, and casinos really do have women like that wearing flattering costumes working as cocktail waitresses.

There's a simple reason why: men like places with attractive women, and men who are gambling will gamble more aggressively when there are attractive women around. Casinos figured this out a loooong time ago. So we are going to get a lot of fan service in this show, and at least some of it does make sense. On the other hand, some of it is gratuitous.

Our protagonist is a little girl named Mint. Her grandfather is what Vegas calls a "whale", a rich man who likes to gamble for high stakes. They are visiting Howard Resorts, which seems to be an artificial city built on a created island. They call it a "casino city", but it's not quite like Vegas because the whole thing is owned by a single company. I have to admit that watching it made me nostalgic for Vegas.

Anyway, back to the story, such as it is. Mint wanders around the island accompanied only by her stuffed bear, Choco. She rides a cable car, and walks down to the beach, but she's seen it all before and it's boring. But we keep getting hints about something called the Goddess of Victory. Customers at the casino all think that if they see her they'll have good luck, and some of them do.

What with one thing and another, Rio (said "Goddess") gets assigned by the hotel manager to accompany Mint. And there's some strange blonde man with four henchman who waylay Rio and Mint outside on a walkway. The blonde man says, "Get the bear!". At which point Rio uses her leet martial arts skills and knocks out all four henchmen. The five men run away.

That was the point where the show got really stupid. Eventually the blonde man shows up at the casino and challenges Rio to a single hand of draw poker. If she wins, he'll explain why he wants the bear, and he'll leave the casino forever. If he wins, he gets the bear -- and Rio has to take her clothes off.

And then we get a poker game. I will give them credit for that part: we didn't get straight-flush versus straight-flush or something ridiculous like that. But we got something akin to a henshin sequence during the poker hand, during which Rio used her ki to affect the outcome of the game.

I have to admit: it was silly, but it was fun. And the art is superb. Very clean animation, and the girls look great.

And the Rio character is refreshingly accessible. She's not stuck up. She's doing a job. She is nice to Mint and they get along.

I've got five frame grabs below the fold. Not quite NSFW but borderline, so better safe than sorry.

UPDATE: Aroduc hated it. Were it not for all the frame grabs, I'd wonder whether he watched the same show I did. 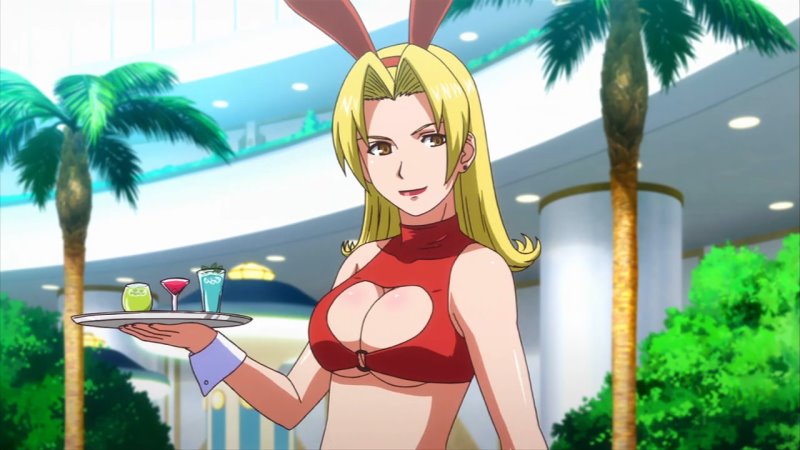 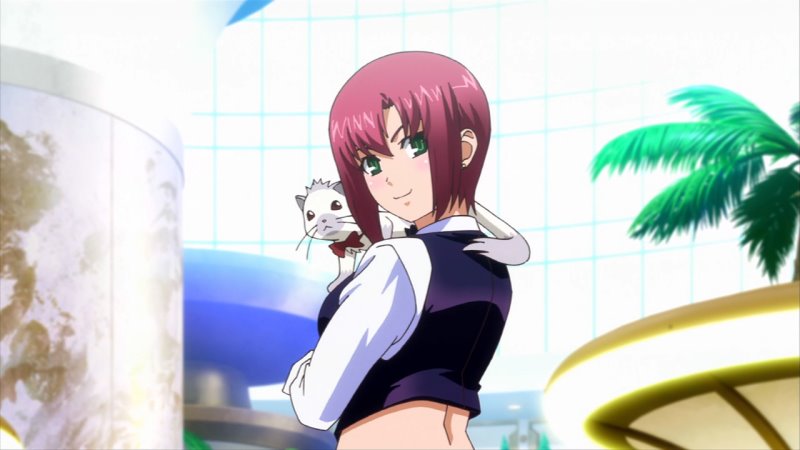 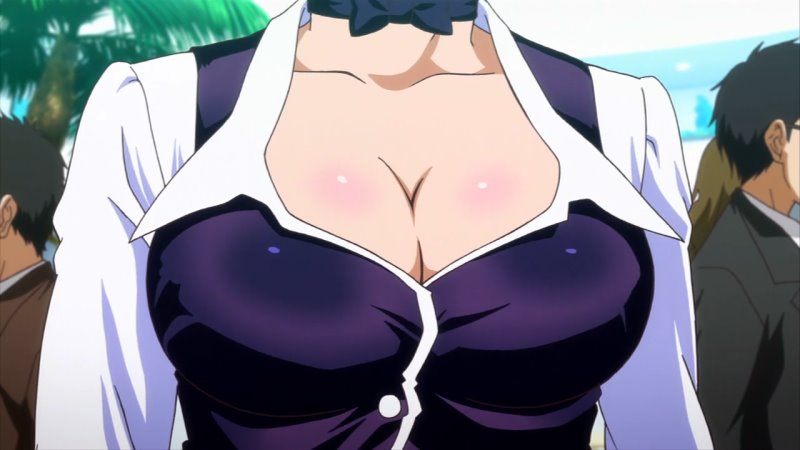 That's one frame out of a gainaxing sequence. But it was... realistic. She's wearing support underwear. She's jiggling, but not a ridiculous amount. Movement measured in millimeters. 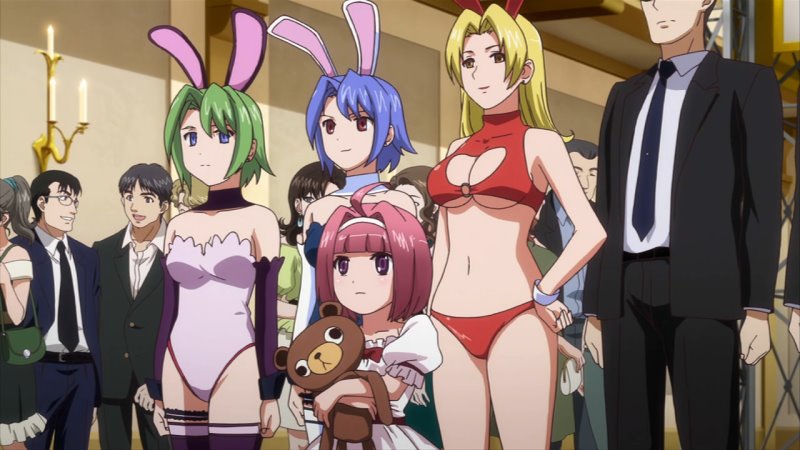 That little girl is Mint, and the rules here are different than Vegas. In Nevada, kids are only permitted to pass through the casino area; they can't linger or watch the games. 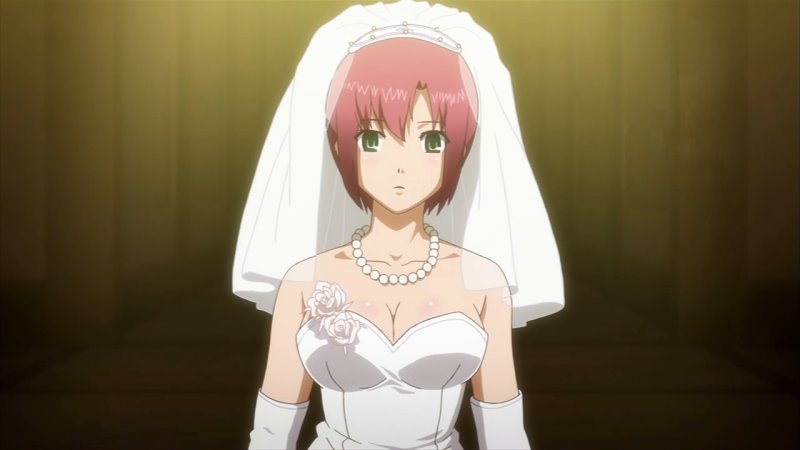 And why is Rio wearing a wedding dress? Well, I didn't really understand that part myself.

1 My reaction was a little bit more negative... and a minute slower than yours.  Drat.

I wonder if the difference in our reactions is that I have spent quite a lot of time in Vegas. It's a very artificial place, in fact, it is consciously artificial. They're selling fantasies. They're selling luxury, and glamor; they make it accessible to the everyday Steve and Duck. I like it there, but I'd never confuse it with real life.

This show is doing a pretty good job of presenting that same gestalt. It's selling exactly the same fantasy.

And maybe my nostalgia for Vegas affected my experience watching the show. Someone who didn't have that probably would not like it nearly as much.

You ever been to Vegas, Wonderduck? I don't just mean, "have you been to a casino" because I've been to casinos elsewhere and they just aren't the same.

I've been to casinos elsewhere in Nevada, and I went to an Indian casino east of San Diego, and there wasn't any magic there. They were just places to gamble.

3 Never been to Vegas, though I've been to some of the casinos in La.

4 I hope my giggle doesn't sound improper but everybody seemed to dislike it except for you, Steven. Even Jessi didn't liked it. Now if it did a 180° turn where everybody ended up liking it and you disliking it... heh.
At least the anime promises to kill some time while I wait for better options.

5 It isn't anything special. But it's not an unpleasant way to while away some time. I have no idea how I'll feel after I watch another episode, though.

6 No, never been to Vegas.  Might happen this summer though, as Duckfest 2011 is going to be there or Seattle this year.

That's one frame out of a gainaxing sequence. But it was... realistic. She's wearing support underwear.

7 Even if this show doesn't turn out to be worth watching, it'll sure be a good source for the top rotation.

8 Honestly, I can say there was some entertainment value mostly due to its silliness. It's not majorly-offensive to me or anything, it's mostly just goofy. I'm tempted to keep up with it in the background for kicks since the pickings are usually pretty slim during the Winter season anyway.

9 A part of me kept wanting to treat it that way, but... it was Mint that killed it for me.  In this modern day and age, letting a little girl wander around an unknown large city unescorted, on foot/by streecar, with a fair sized sum of money (we see her attend a resort dinner-and-show) is just not credible.

That ridiculous card game was the capper.  What kind of sick bastard puts a little girl (or even her favorite teddy bear) up as collateral for a bet?  Just so he can take pictures of his employee stripping naked to use in commercials?  Oh, hell no  I'm not a prude, but this reeks of abuse.. Inertia kept me in until the guy discarded and went for the four-of-a-kind; then the henshin decks started, and I was DONE.

If there's any justice, the hotel manager will get what's coming to him before it's all over. But there probably isn't.

It occured to me just now that I should have captioned that last picture, "Does this dress make me look fat?"

Ubu, did you stick with it long enough to see what hands they both ended up with?

No, never been to Vegas. Might happen this summer though, as Duckfest 2011 is going to be there or Seattle this year.

Be sure to take a loli and a teddy bear so you can watch women play strip poker.

Or is that not the lesson I was supposed to take away from this?

12 No, the last scene I tolerated is the one in my article. At that point, I didn't care; throwing away the straight flush for four queens, and then NOT showing Rio's hand before the henshin deck started was just (too) cheap theatrics. I was mildly interested to see what impossible hand they were going to give her to win, (or if she was going to cause him to have a bad hand), but I didn't care enough to continue.