The Tsubasa episode was the best one in a very long time. But this series has mostly fallen into a rut. Ep 7 of series 3 is yet another hair match. Ep 6 was another forgettable one about Happosai.

And another disappointment: the ecchi level has gone way down. It's a bit surprising how variable that's been. There have been parts of this series with multiple ecchi scenes per episode, and then long stretches of multiple episodes with none at all. I think that in the third series we've seen maybe one tit flash. (I have low tastes.)

In the late 1980's and early 1990's there were several big-name manga series which ran far longer than the mangakas really expected them to, simply because the magazines wouldn't let them finish. Toriyama expected Dragonball to end after Frieza was defeated, for instance. And I believe I've read that Takahashi didn't expect Ranma 1/2 to run as long as it did.

There simply isn't enough story in this concept to sustain a series this long, and that's why it feels so recycled. There still are occasional episodes that are really, really good (like the Tsubasa one) but mostly it's feeling like reruns.

I don't mind that I bought the third series, but I doubt I'll buy any more of the TV series any time soon. I probably will jump to the end and watch the OVAs, and leave it at that.

Ranma 1/2 is another of those series that any real hardcore otaku has to know about, but the real historical significance of it is mainly due to the fact that it was the series that brought Hayashibara Megumi into the limelight. Her performance as Ranma-chan continues to be sterling no matter how stupid everything else is in any given episode or sequence. 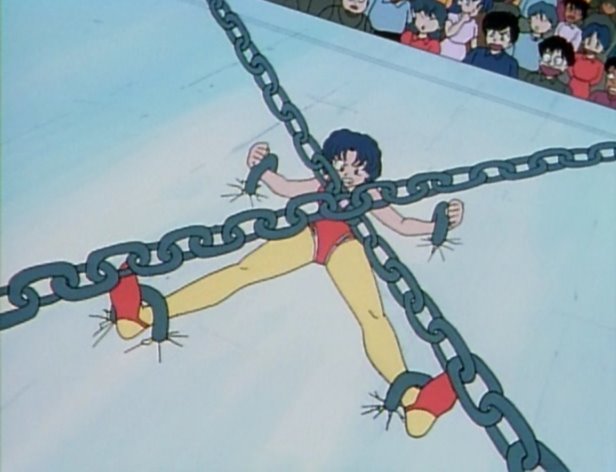 No, adding bondo doesn't retrieve it.

UPDATE: A flashback in ep 8 reminded me that there was one episode at the end of the second series with a lot of ecchi. But it was so awful that I skipped through what otherwise would be considered "the good parts". Watching Ranma-chan chasing Happosai around in the girls' side of a bathhouse just wasn't any good, even if Ranma-chan wasn't wearing anything for most of it.

It's amazing that this series could spoil a bathhouse episode so badly.

1 Probably just as well.  I haven't watched them myself, but from what I've heard, the animation quality in the later seasons drops off considerably.

Regarding the OVAs: Just so you know, they're not a series.  They are stories which take up one or two episodes each, with no continuity between them.  They're a real mixed bag, some pretty good, some substantially less so.  I think the set is worth it if you still like the basic concept of the Ranma 1/2 story, but you're probably better served waiting a while after your recent overdose.

2 ...the animation quality in the later seasons drops off considerably.

It sure does.  Late in season 3 and through about the first half of season 4 it's horrible in spots.  The worst example is when Ranma-chan lifts her chin and loses all depth, making her face look flat from nose to the base of her throat.  And Genma (human-form) frequently looks like he fell face-first onto an operating drill press.  Soun turns pink and never seems to recover from it....

But the art quality does improve after it hits its nadir in about the middle of season 4.

By the way, the best way to enjoy Ranma is to watch no more than a couple episodes per week.  Most of us who had to wait for the show to trickle out from Viz at the astounding rate of two eps per month loved it to pieces despite the limited number of plots.

3 I'm kind of spreading it out more, but I don't think I want to spread it out that far.