The Ryoga introduction-arc makes a lot of things from the second series more clear. For instance, it's much more obvious now why it is that Ranma feels an obligation to keep Ryoga's secret.

One of the trope pages is "Pillars of Moral Character". It explains some things about the series which isn't apparent to a western viewer, due to the Japanese concepts of giri and gimu, which I only dimly understand. In essence, part of why the series is funny to the Japanese is that Ranma is an honorable guy, but primarily because of his father's dishonesty, Ranma is caught in a monstrous ethical bind. For all intents and purposes, there's no path available to him that doesn't involve acting dishonorably to at least someone and probably igniting a full-scale bloody feud as a result.

After reading it, my thought was that Ranma should elope with Akane and the two of them should open a dojo in Denver under assumed names.

And it even makes some sense, a lot of the time. Not always, however; how would Akane end up with a tea kettle at school?

UPDATE: Ep 11, and we have yet another nutty fighting style: Rhythmic Gymnastics Martial Arts. This one isn't quite as nutty as the ice skating martial arts, but it's a close call.

UPDATE: Halfway through ep 12, and they certainly telegraphed this punchline. Akane is hurt, and Ranma is going to have to represent the high school in the girls' rhythmic gymnastics martial arts tournament. I knew this was coming. It was obvious. 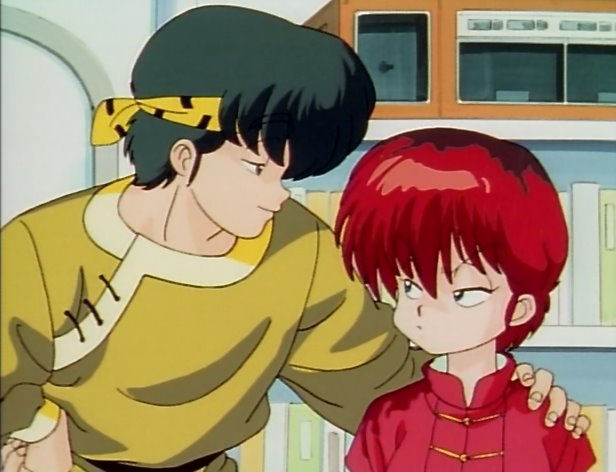 Ryoga gets the upper hand, for a change.

UPDATE: Jeeze, the Kodachi story arc is turning out to be stupid. I can't believe this. I'd start using the 10-second skip button, except that Viz has mastered the disk with settings that disable it. (Bastards. I hate it when they do that.)

Even the sight of Ranma-chan in a leotard doesn't save it. 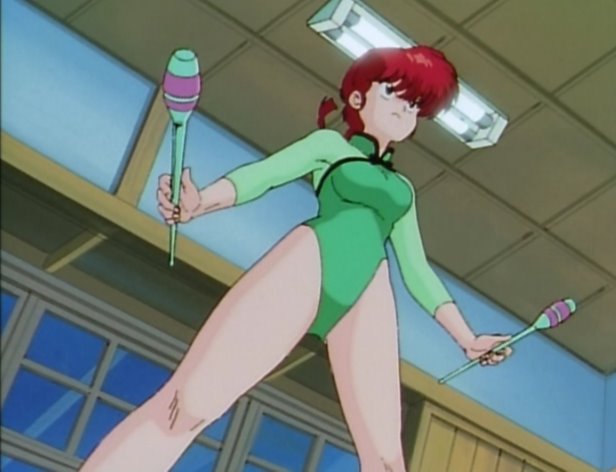 UPDATE: Yeah, that really, really was stupid. I'm glad it's over.

I think the Kodachi story arc is as bad as this series has been so far, in all the episodes I've seen. I'm beginning to understand why they sacked the production team after the first season and restaffed, and why the new team changed the overall feel of the series so much.

After reading it, my thought was that Ranma should elope with Akane and the two of them should open a dojo in Denver under assumed names.

I think I've read that fanfic...

2 I think the normal explanation is "janitor's office". ;p

3 That first requires Akane to get over her own issues. . . but I'll admit, those are more artificial ones imposed by the nature of the series, not intrinsic to the character.

*not an Akane fan, much prefers Ukyo*

I actually read the Ranma 1/2 manga for the "Introducing Kodachi" story arc, and let's just say the anime really couldn't have been much stupider. I suspect they just lifted the whole thing straight from the manga, though hopefully they cut out the stupidest parts.

"Lousy source material" is no excuse for the director, unless he's under a contract with the mangaka to not change anything, and I'm sure that' s not the case here.

Lots of anime have made substantial changes to the source material in the interests of telling a better story. (Or the attempt to do so, which doesn't always succeed.) And I would be willing to bet that the overall change in the second and subsequent seasons is not a direct reflection of a change in the manga.

So even if the Kodachi arc in the manga was lousy, the anime director doesn't get off.

"Lots of anime have made substantial changes to the source material in the interests of telling a better story."

I'm sure that was (one of) Gonzo's excuse(s) for R+V. Pity they didn't succeed; the source could have used some improvement.

7 I think the buckets and kettles are explained by the "subspace hammer" trope.  Always there when you need one....

9 From the description it's only mildly similar. I seriously doubt Takahashi had ever heard of that movie when she wrote this section of the manga.