If Tezuka is the putative "father" of modern anime, Takahashi Rumiko has to be the mother. Given how much stuff she's turned out, it's hard to see how she has time to sleep.

You got your Maison Ikkoku, your Urusei Yatsura, and you got Ranma 1/2. Three classic series, and I don't really know much about any of them. But I do know that they're early, and all three of them were very, very influential.

They also tend to tease. In about the second episode of Urusei Yatsura, there's a boob shot of Lum. So does that indicate what there's going to be a lot of? People who have watched the series say, "no". Hmm... 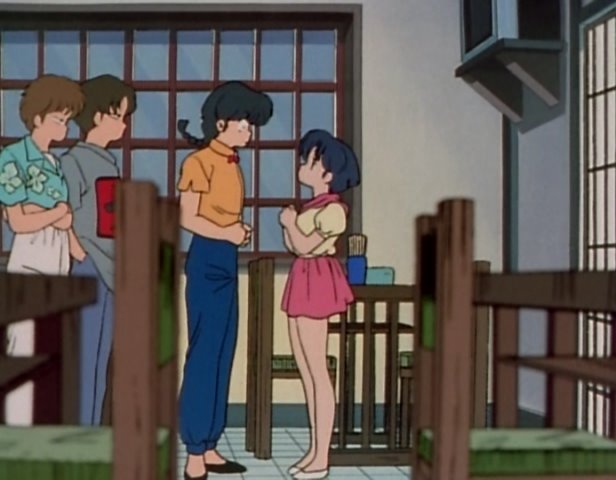 Think her skirt is short enough, there? And five seconds into the OP, we get a topless shot of (what I presume is) Akane, taking a bubble bath.

The other day I stumbled on some dusty Minx documentation and found out that Pixy had implemented a NSFW tag, to work the same as the "spoiler" tag. Looks to me like it's a good time to try it out. 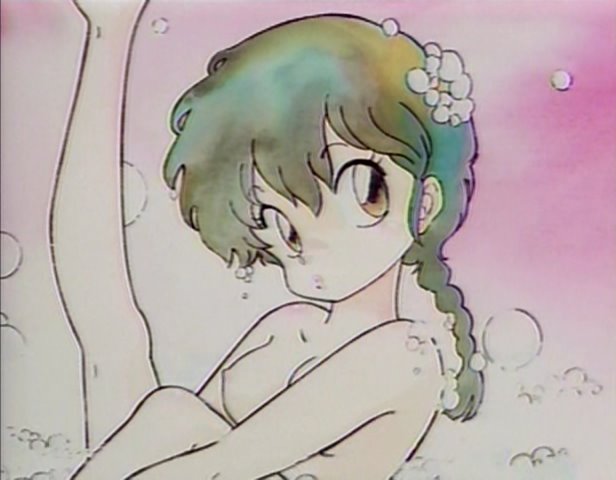 I'm confused. That can't be Akane because she doesn't have a braid. But it doesn't seem like it could be Ranma girl-mode, because the hair isn't red, and because a hot bubble-bath would switch her back. So who is that?

Now I've heard that this series is supposed to be more fan-servicey than the other two (with Maison Ikkoku being the least), but I don't know if it's supposed to be outright ecchi. Putting that in the OP certainly tries to pretend that it is. But it could just be pretension.

Between UY and this series, Takahashi seems to have set the early standard for screwball farces. I only got a couple of episodes into UY; problem was that the guy was a jerk, and everyone is nuts. I rather hope this series works better for me, but I'm worried that the gender-bender aspect of it may turn out to be a bit too gross. If Ranma 2 gives us topless shots, however, maybe I'll grit my teeth and bear it.

What we won't be seeing is long Ranma 2 bathing sequences. As I understand it, any significant encounter with hot water switches her back to him. (Just how in hell do we refer to the two modes, anyway?)

Also in the favor of this one is Hayashibara Megumi as the girl mode. Which suggests that Ranma spends a lot of time in that mode. I wonder if he/she comes to like it?

And the seiyuu doing the male-mode voice sure as hell has a long CV.

UPDATE: Well, that NSFW pic above was from the manga, and maybe it really was intended to be Ranma in girl mode. And we get her in the first ep of season 2: 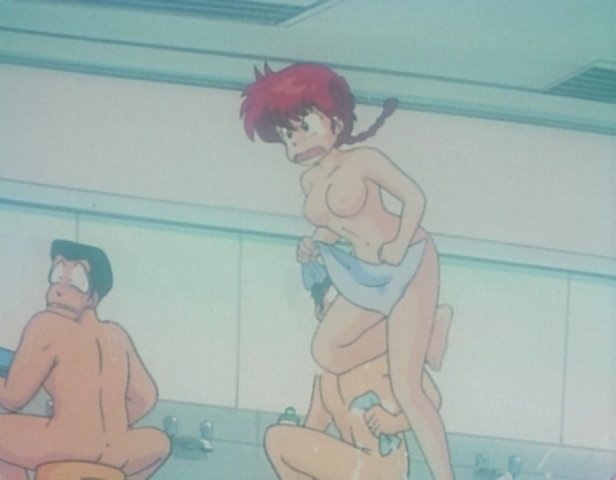 Another thing Takahashi did well was to make her girls nicely curvy, without making them gross.

UPDATE: I looked up the series in Wikipedia. It says:

In Japan, the manga was serialized in Shogakukan's Shōnen Sunday where it ran from 1987–1996. Takahashi has stated in interviews that she wanted to produce a story that would be popular with children. Ranma's main audience was boys from elementary to junior high school age.

With stuff like this in it, I guess it would have been. 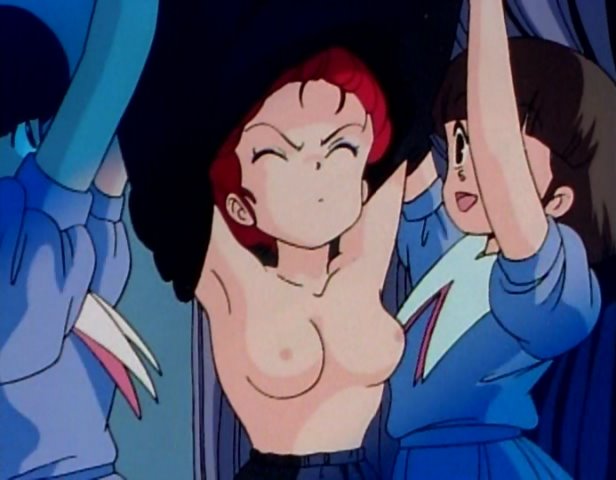 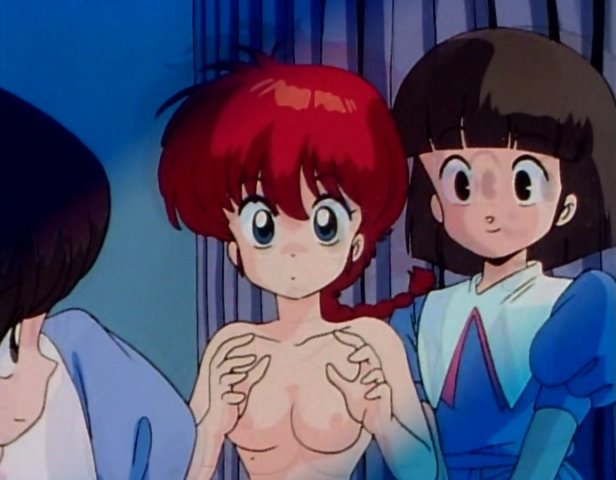 I'm not going to keep doing this, by the way.

UPDATE: The fundamental comedic concept of the series is that Ranma got a curse from a magical spring in China. Whenever he's doused with cold water, he becomes she. When she hits hot water, she becomes he again. However, it seems to take more hot water, and longer, to switch back.

Washing hands, or taking a drink, isn't enough. He has to really get soaked, at least a bucket full, in order to change to she.

Based on that, it seemed to me that avoiding cold water isn't really all that hard. I don't even remember the last time I myself got into any. At least 15 years, maybe more. So I wondered just how it could come up often enough to be a reasonable comedic contrivance.

Now I know the answer: Ryouga suffers from a similar curse, related to dousing with cold water, and Ryouga and Ranma have a tit-for-tat thing going where they try to douse each other in embarassing situations.

That works for me.

UPDATE: At the very end of the "Ice-skating-martial-arts" story, Ryouga and Ranma-chan have a pretty damned cool fight. I thought it was animated really well. I'm not so sure they (the characters) were thinking it through, however. Kicks while wearing ice skates could be pretty deadly if they struck.

UPDATE: It looks like a running joke in this series is different weird schools of martial arts. We've already had ice-skating-martial-arts, and now ramen delivery martial arts.

UPDATE: I'll give the translator points for this one: They translated neko-ken as "Cat-fu". That's really good!

I'm still on the first DVD of this second season. This is from episode 5. But I can see something that I assume is a deliberate plot point: Ranma and Akane bicker constantly. At any intimation to the contrary, they emphatically deny that either of them is attracted to the other.

And it's blatantly obvious that they really are falling for each other. It's an interesting dynamic, and it works for me.

1 Oh, there's a lot more than two topless shots in Ranma, trust me.

There's even a full-frontal shower scene.

That's definitely Ranma-chan in the picture, by the way.  The red hair was something they added in the anime to make the change more distinctive.

I found the early seasons of Ranma to be a lot of fun, but bear in mind that I was watching them a long time ago, and hadn't seen the dozens of derivative shows that have appeared since.  So YMMV.

2 And I think Tezuka is referred to as the "God" of anime, and Go Nagai as the "father".

Which makes me wonder if Go Nagai and Rumiko Takahashi have ever worked together.  I'm almost afraid to find out...

3 I guess Ranma-chan and Ranma-kun wouldn't be too bad a way to refer to the two modes, would it?

4 As regards Go Nagai, I'm not sure that the creator of Kekko Kamen and Cutey Honey is really the father we want to acknowledge. He's more like the creepy uncle who goes around wearing the trench coat.

5 Well, yeah, but Go Nagai started out by creating one enormously popular giant robot show after another.  (Getter Robo, Mazinger, Grandizer and so on.)  I believe he invented both the giant robot combine sequence and the magical girl transformation sequence.

6 Ranma-chan and Ranma-kun are frequently accepted designations for female-type Ranma and male-type Ranma.  As a side note, one interminable discussion in Ranma fandom is whether Ranma-chan should be referred to as she or he.

I've heard it said that Rumiko Takahashi is the richest woman in Japan due to her prodigious manga output.

7 My understanding is that another part of the humor of the series is all of the conflicting honor obligations Ranma is under.

8 Yeah, Ranma-chan and Ranma-kun are generally accepted, with Ranko and Ranma as a distant second.

Based on that, it seemed to me that avoiding cold water isn't really all that hard. I don't even remember the last time I myself got into any. At least 15 years, maybe more. So I wondered just how it could come up often enough to be a reasonable comedic contrivance.

As I recall, even with all the justifications like the Ryouga/Ranma feud, cold water shows up rather more often than might be reasonably expected.  Fanon, of course, has unnecessarily postulated a "cold water magnet" aspect to the curse to explain it.

9 I don't know that we need anything like that. It isn't just the feud, either. Other people who know about it also use cold or hot water on those who are afflicted, for various reasons. In the "ramen race" episode, Ranma's father shoves him into the river to force a transformation, for instance.

10 Yes, things can get overanalyzed that way a lot.  I think because of the romantic elements and the way some of the fights get very serious, people forget that at its center Ranma 1/2 is a slapstick comedy.  Ranma routinely gets splashed with water in unlikely situations because it is funny.

11 Takahashi is never shy about engineering coincidences for the advancement of the plot. If she needs Ranma to change genders, the water will be there, by hook or by crook.

Her biggest weakness, I always thought, was in plot resolution. She sets up fairly elaborate situations and runs episodic story after story in those situations, but the underlying tensions don't change at all... the story just accumulates additional weird characters. With Ranma, there was no problem with adding in Ryoga, who's fun in a juggernaut sense... and putting in a bit more gender-bending with Ukyo was entertaining... but by the time you get to Pantyhose Taro it's just getting ridiculous.

I understand that nobody wants to kill the golden goose, but oy! A little resolution is good for the fans!

In the five episodes I've watched, Ranma has switched in every episode. During the "ramen-race" episode, he was being tempted to change, and kept saying to himself, "I'm a guy. I'm never going to be a girl again." And I said, "Yeah, right."

13 Ranma-chan is the second-cutest girl in the show, and the only one that properly appreciates her own fanservice.

I always liked the name of the dojo:  "The Saotome School of Indiscriminate Grappling."

Takahashi is not obscenely wealthy (there is a list each year of the people in Japan who made the most money and she was on there a few times during her peak) because of her output, but because of her sales.  I think the Ranma series alone has sold in excess of 100 million (not a typo) copies.

Regarding her work habits...I was the first foreigner to interview her (for the now-defunct "Amazing Heroes" magazine from Fantagraphics) and was amazed that she claims to have quite a bit of free time.  She has a very meticulous work schedule and I'm told she is rarely late on he deadlines.  I think her comment was something along the lines of "If you work responsibly and meet your deadlines, it's possible to have a fairly normal life."  I swear she's the only mangaka in Japan who can say this.  I really enjoyed speaking with her.  Not only is she witty, but she was cute as a bug and had what I can only call "rock star" charisma.

The only other mangaka I've met who was so charismatic was Uchida Shungicu.  Shungicu looks a little "obasan"-like now, but when I met her 20 years ago she was some sexy broad, let me tell you.