Ep 15 beginning: seems that getting caught in a rain storm without an umbrella is enough to make Ranma change.

Actually, it pretty much reinforces the real rule: any amount of cold water is sufficient if it results in comedy. 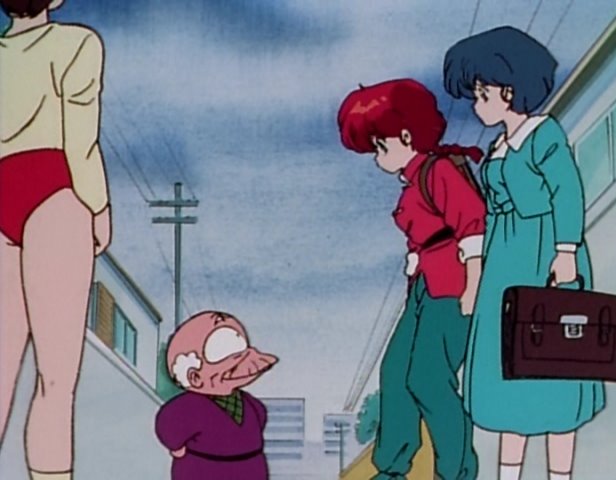 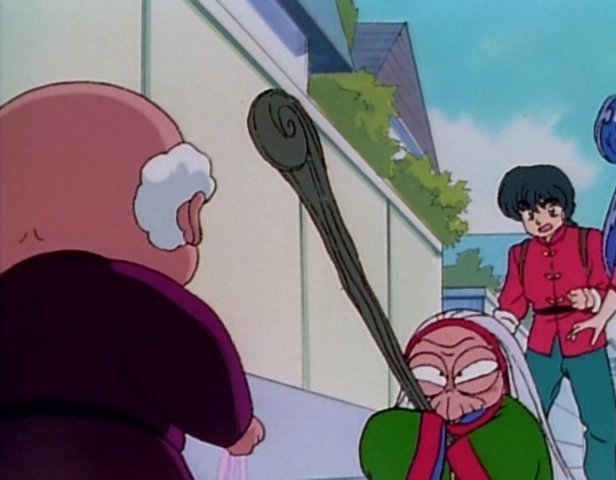 UPDATE: Happosai is going to be a regular character, isn't he? Barf. I may have been premature in ordering the third season.

UPDATE: On the other hand, he has control over his ki and can use it for extraordinary attacks. I wonder if he'll start teaching Ranma those techniques? Kamehameha!

UPDATE: The subtitle on this scene is "He has a nosebleed!" 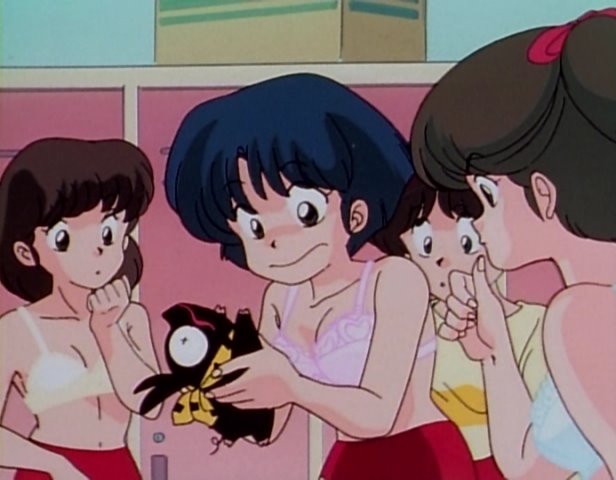 UPDATE: That's from ep 16. This one is just a little too strange. First, it's blatantly obvious that Happosai is responsible for that map, and that it's a fake. Second, even if it was genuine, couldn't Ranma and Ryoga just wait until night to break into the girl's locker room to try to find that spring? It's not like a few more hours will make any difference, after all.

UPDATE: They're getting careless with continuity. Not, mind, that one worries all that much about continuity in a farce, but they've been pretty good about it.

In ep 16 there's a scene with Ranma chasing Happosai. In one small segment of it, it's definitely Hayashibara's voice, but the art is of the male form. Just before, and just after, it's the female version. It was just drawn wrong for those few frames, and I guess they decided they didn't want to go back and do it again.

And then in ep 17, when Akane finds out about the map and the supposed springs under the girls' locker room, she says to Ryoga, "You were trying to help cure Ranma of his curse!" Which was a continuity problem because there were a bunch of girls in the door listening. I didn't think that Ranma's problem was widely known, but that should have pretty much given it away. But of course, it won't.

UPDATE: I must say, Hayashibara's performance in this is outstanding and very memorable. I doubt this was her first major role, but it was one of her earlier ones, and I bet it went a long way to cementing her position as the leading seiyuu of her time.

Considering the similiarities in the characters, I wouldn't be surprised if her performance as Ranma-chan was a big part of why she got cast as Lina Inverse.

ANN's seiyuu CV's are comprehensive and useful, but I really wish there were an easy way to order them by time, instead of by name. It would be interesting to see the time sequence for successful performers like Hayashibara or Koyasu.

UPDATE: Well, I guess we could look them up on IMDB. When did IMDB start adding anime to their database? (Man, I didn't know Hayashibara did Rei in Evangelion. Talk about casting against type!)

The IMDB listing would be more useful if they used wapuro romaji, and if they gave the English names for the series. Anyway, it looks like this was Hayashibara's first big part in a series. Everything before that is OVAs, movies, and bit parts.

UPDATE: Someone sure raised Akane right. She quietly says ojamashimasu! while breaking and entering.

UPDATE: There are a lot of crazy people in this series, too. Hard to say who's the craziest, but right now I'm leaning in favor of Kuno's sister, whatever the heck her name is. Man, she's really certifiable.

UPDATE: Is Takahashi engaging in a pun? It (I'm not going to say what) is called nan'niichuan. For a while I was reading that as nan'niichan which would mean "What, big brother?"

UPDATE: And I think maybe the least crazy person in the series is Shampoo's grandmother. (It isn't Akane's eldest sister; she's too simple.)

. . .because it'd make their brief 'romantic' subplot, um, rather squicky.

2 Heh, that particular question is a spoiler. ;p

Anyway, it's a Takahashi story. That means that characters, even ones who aren't ordinarily stupid (and Ryoga ain't a high-wattage bulb to start with) will have total failure of thought if it's necessary to make the plot work. Akane, for example, will never ask herself "why does Ranma keep on calling Ryoga 'P-chan'?"

3 Part of the reason for the carelessness involving the secret of Ranma's curse may be due to it not being an issue in the original manga, where if I recall correctly it quickly became generally known.

Re: Happosai, he does indeed become a recurring character.

Re: Kamehameha Much later in the manga, Ranma (and Ryouga) pick up a Kamehameha-like "energy blast" technique; I don't recall whether the anime did that storyline before ending or not, though.

4 I don't think that anybody will ever really top Megumi.

You didn't know she did Rei's voice (she also did Yui... and Pen-Pen)?

(It's not a AMV, I *promise*... it's an official Eva audio omake featuring the entire main cast that's been translated).

I don't think that anybody will ever really top Megumi.

I don't think I agree with that. I think that Mitsuishi Kotono is just as good, especially in those kinds of roles.

6 Happosai is a right royal pain in the butt - I got tired of him very quickly ("one joke pony", the dirty old man).  Takahashi sensei must have had some really odd (to be polite) older men in her life...

I agree with you on Mitsuishi Kotono - just as good, and one of my favorite seiyuu.