I don't have the slightest idea how this series fits into the canon or the continuity. But they're doing a surprising job of keeping it interesting, at least based on four episodes I've watched so far.

I have been finding "Team Rocket" thoroughly annoying.

Or at least I did, until I looked in the credits and saw that Musashi's voice is done by (tada) Hayashibara Megumi. Which means it's the same voice as Lina Inverse. I'm sure I recognize his voice, too, but I haven't figured out his name yet so I can't look him up.

The basic concept of the series doesn't bear close scrutiny, and I'm doing my best to keep my engineer's instincts firmly under control. This is about characterization, not about logic.

I had long wondered just what the heck it was that Pikachu brought to the table to make it/him/her a formidable fighter. Turns out that it can fire lightning bolts, which is pretty darned impressive.

I'm getting the impression that Pikachu is a "he", in fact.

One of the surprising things about the series is just how much creativity went into developing all the various monsters. Presumably they were all inherited from the game, but it's still obvious that someone put a lot of work into it. Creating that many different monsters and making them visually interesting, plus assigning them such a wide variety of different powers, is pretty impressive.

One of the three leads, Takeshi, has a voice I recognized in an instant: Ueda Yuji. He's been part of my anime life from the very beginning, because he was in Hand Maid May. More recently he did the voice of Woody in Aria. This role is a good one for him.

Running down the list of guest seiyuu, it's got a surprisingly sterling cast. Benten-sama from Kamichu is in it. Sugar the snow fairy is in it. Yurika from Nadesico is in it. Louise the Zero is in it.

All in all a pleasant surprise. I have no idea whether I'll stick with it. I downloaded the most recent 8 episodes, and I may well keep up with it after that.

UPDATE: The other member of Team Rocket is Kojiro, and he has the voice of Kurz Weber from Full Metal Panic.

UPDATE: This is why I think Pikachu is a "he": 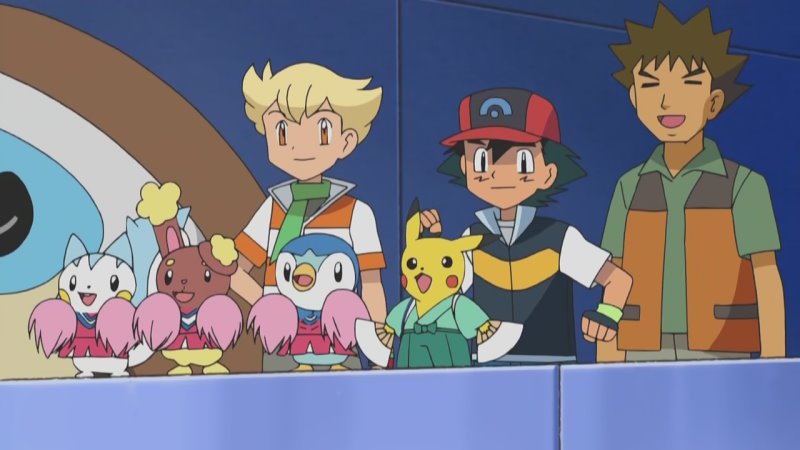 Who are you, and what have you done with the real Steven Den Beste?

2 (Just to be clear, I'm supressing giggles over this turn of events.  I hate it when I giggle.)

3 I need one emergency infusion of DBZ, stat!

4 Can Naruto be far behind?

5 Hopefully not for SDB's sake.  I'm not sure how far the anime has gone, but the manga has dove head first into Wall Banger territory. . . repeatedly and enthusiastically.  Some time after the timeskip, Kishimoto just stopped caring about even trying to make his story sensical and coherent.

6 Naruto is probably not in the cards, but I've found myself wondering if I should give Bleach a try.

7 Could be worse. (Could be Shugo Chara.)

8 Pokemon is also one of my guilty pleasures.  I've enjoyed the Bleach manga, but haven't grabbed any of the anime for it.

9 I watched a couple of episodes of Shugo Chara in broadcast in hotel. It's not too bad. It seems entirely unlike Naruto with its barbaric brutality. If anything, reminded me of Sailor Moon a bit.

10 For what its worth, I've heard better things about Bleach than Naruto.  Its very much shounen, but it at least gives most of the cast chances for development.  Unlike Naruto, where the author created tons of characters. . . and then more or less abandoned them.

12 I liked to watch the dub of Pokemon, but got out of the habit during the latter part of engineering school. (It was my second anime, after Dragonball Z.) I hope you enjoy it. One of these days I am going to buy myself a gameboy and play the games. Pikachu has always come off as a he to me. As for the rest of the pokemon, I expect I'm not familiar with most of them as they tend to rotate out most of them except for Pikachu whenever the team/hero travels to a new region. (This is because each region has a different set of pokemon from the set of games that they are driving things for. In the game this would tend to make Pikachu high level and thus abnormally powerful.) Team Rocket is fairly annoying, but there have been times when they've verged on likeable.

I've been following the manga for Bleach, Naruto, and One Piece. I disagree that Kishimoto ruined Naruto, I think some of the dislikable parts were necessary for setting up the story he wants to tell. It looks like it is proceeding to a satisfying conclusion to me, but maybe I just have bad taste.

As for Bleach, Steven, you do realise that it is about Psychopomps and there is some not nice content? I do not know whether you would care for it.

Is it Shugo Chara or Naruto that is considered to have barbaric brutality? If Shugo Chara, it sounds more interesting to me then before.

13 According to the games, Pokemon do have a gender and do reproduce. Male and female Pokemon of the same type don't appear different, however. But yeah, to the extent that Pikachu gets a gender, he's a guy. (Also, lookin' kind of Japanese there, Pikachu! I'd ask where he got the outfit, but I know too many people with an addiction to the Build-a-Bear store...)

I watched a bunch of the original episodes back when I worked for Funco (we used to run them on one of the TVs - those were the days where we'd do as much business in Pokemon cards as in games.) The show's not super-wonderful, but it's better than its reputation, anyway.

I quit following Bleach, but it was quite entertaining for a time. Gets quite rank-obsessive here and there, but hey, it's shounen. ;p

14 Indeed Pokemon has good sides and in fact I wish Sekirei was more like Pokemon than a regular harem of misunderstandings plus mortal danger.

15 #12- My tolerance for Naruto ended with the entire Pain arc, and its massive massive abuse of IITS, rather pathetic attempts to make the main villain sympathetic, and ludicrous deus ex machina ending ( *even by the standards of shounen* ).

Is it Shugo Chara or Naruto that is considered to have barbaric brutality? If Shugo Chara, it sounds more interesting to me then before.

um... I don't think there's a lot of barbaric brutality in Shugo Chara.

17 After seeing Magical Play 3D, anyone can be forgiven, in fact expected to refuse to judge a book by its cover (coincidentially I watched the 3D first due to the layout of Crunchyroll; imagine my surprise ( although, for the record, I approve of shooting their knock-off of Queen Latifa in the head). But in this case, I meant Naruto.

18 I remember when Pokemon was still called "Pocket Monsters."  For about 150 yen you got a little box with a card and badly-made figure and some inedible candy-like substance in it.  Then it sort of seemed to die out.  I don't know what drove the sudden resurgence, but I think it was the Nintendo game.  I'm no Pokemon expert, though.
Bleach is loaded with clever ideas, but suffers from weak animation, way too many characters, and places where nothing happens for 4 or 5 episodes.  That didn't stop me from watching more than 150 episodes, though.  It's oddly addicting.  I preferred Soul Eater.  All the good parts of Bleach but none of the bad ones.  And the animation is outstanding--the OP is the best I've seen in a decade.

19 The first dozen episodes of Bleach are actually very good.  After that it's not bad, but...  Well, you liked DBZ, so you might be fine.

20 I'm pretty sure "Pocket Monsters" was something different, probably some spinoff of the earlier Tamagotchi. Pokemon's earliest incarnation was a video game concept, originally called "Capsule Monsters," that Satoshi Tajiri came up with the idea for from seeing a Nintendo advertisement for the Game Boy Game Link Cable in Japan, with little bugs and mice representing data running up and down the cable.Â

21 The video game came before the trading cards or figures, but there was a considerable gap between game releases in Japan (5 years vs 3 years in North America), so the popularity might have died down. Alternatively, that candy-toy combo might have been from "Monster in My Pocket", but  I doubt those were ever sold in Japan...

Anyway, the first season of Pokemon was fairly entertaining, but it becomes a real slog when the story seems to go nowhere. (However, I might relieve old memories by downloading the "seizure episode".)

22 My favourite is where Kojiro bumps his head and goes GAR.