So how about I post about anime once in a while, eh?

UPDATE: It's a shame we didn't get to see the battle against Team Pizza, but I think the director is worried that the show might get repetitive,and that's why he decided to skip it. He's been a sure hand so are, and I trust him.

UPDATE: It's really creepy that all of Miho's teddy bears are covered with bandages.

UPDATE: And so we end ep 9 with a cliff hanger. Who won? My guess: It'll be judged a simultaneous kill, so the match will be decided by the fact that Pravda had more tanks knocked out.

What in the heck is this thing? 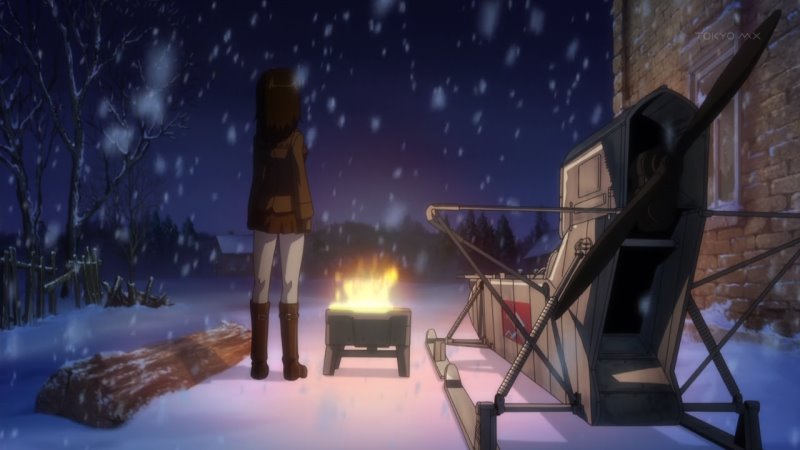 It's on skis and has a propeller on the back; it looks like a very practical way to move one or two people rapidly over snow. Obviously it's a Soviet vehicle but I've never seen anything like it before.

UPDATE: One of the things they've been doing is to try to give each team the character of the country whose tanks they're using. And they did it again: I'm impressed by the way that Katyusha was willing to sacrifice some of her tanks just to set up the trap. It's the Soviet way: huge losses are acceptable if you win. Men are cheap.

Whereas Saunders was rich, rich, rich; that's the way the Americans fought.

Another nice thing is that they included one of the Soviet's best allies: General Winter. (Would have been nice to see General Mud, too, but it would be too much to ask.)

UPDATE: For that matter, Anzu's Banzai charge was right in character for the Japanese.

2 You got it. And if it had a crew of two, with a machine gun mounted on the front, it would be the terror of German infantry. What a cool idea!

3 I'm not so sure about the terror, considering that it wasn't armored. A regular tank with snow chains would be much more damaging to the enemy. The main advantage of aerosani was its speed, or, actually speed per cost. After the war, however, aircraft took over the application, especially the helicopters. Keep in mind that while core Russia and Western Siberia are rather flat, East Siberia is extremely rugged. These days, when costs are realistically considered again, there's a movement to replace helicopters with ampfibian airplanes. But nobody is eager to go back to aerosani.

Thinking about it more, the big problem is: no reverse.

5 My guess is it had many of the same problems as motorcycle troops.

6 The more I think about it, the worse it gets. It would be impossible to sneak up on someone with it, because the prop is going to be really loud. And if you're moving over fresh snow, it's going to kick a huge amount of it up into the air, behind it. Which means a unit of these couldn't move in column; everyone after the lead would be blind.

7 I remember a puzzle from grade school. A driver of the aero sled had to cancel a regularly scheduled trip due to malfunction and a dog sled had to take over. He explained his navigation to the dog driver as "follow the Alderaan until reaching the destination" (presumably across flat and featureless frozen Tundra during a Polar night). The dog driver new this navigation method would not work for him. Why and what did he do?

I'm sure it's easy to guess why and even calculate the new navigation solution.

However, imagine the way of life where children considered this kind of setting realistic. They did not ask why didn't use a GPS receiver in his iPhone.

8 The problem isn't "no reverse," the problem is "no brakes."  Also "no hands" if you get too close.

9 RF-8 (featured in GaruPan) had brakes mounted on the rear skids. A detailed drawing of the brake can be found in a tread at waralbum.ru.It's the first of the two, the second being the brake of NKL-16 (a larger sled with enclosed cabin).

10 The problem with a tank is that any amount of snow, it will tend to sink.  That's not a problem if there's only six inches.  That could be a major problem when there's six feet.   For that matter, I imagine they're somewhat more tolerant of frozen rivers than your average 30-ton behemoth.

They may not be armored, but they're cheap, fast, and having a dozen of them hit your infantry in the open or behind the lines would really suck.  At their speed, light artillery would need a lot of luck to score a hit.  Game-changing?  No.  But a lethal weapon that would strike fear into infantry? Yes.

I also don't see why they couldn't deliver supplies, especially without the gunner and if the propellers were high enough to allow a tow.

Oh, and Pete, this southern boy has no idea of the solution, and the only problem I can think of is that it might be too cold to travel by dogsled at night.

11 Since dog sled is significantly slower, Earth's rotation makes Alderaan move across the duration of the run, thus putting you into the middle of nowhere to freeze. The azimuth offset has to be roughly proportional to the additional hours traveled multiplied by 15 (projection taken upon the horizon, which may be difficult in a featureless tundra).

Or if you look at the bright side, even pre-GPS, who needed to navigate by the stars when when gas stations used to provide road maps for free? (i.e.: we had roads everywhere we wanted to go, except Alaska)

13 Don't worry, Ubu, Russian schools suck now. All kinds of talking heads get on Russian TV and say "we nurtured a whole generation of Americans now". It makes me rage because they raised a generation of consumers who correspond to their idiotic caricature of Americans as people who cannot extract square roots from positive integers. I remember what a revelation it was to me when SDB wrote at Chizumatic "Americans do not bow, they look each other in the eye and shook hands". Do they teach that in Russian schools? Of course not! So they aren't nurturing Americans there!

14 Speaking of tanks sinking in snow, it is only a question of the weight. A Main Battle Tank would undoubtedly sink, but a light tank would probably not, and it is way ahead of a sled with 1 machine gun.

I happened to read memoirs of the chief of 1st Soviet Antarctic Expedition, that was established ahead of International Geophisical Year in 1957. It mentioned Kharkovchanka a few times. The vehicle was placed on the chassis of an artillery tug ATT, and went through several revisions, each one making tracks wider and wider, to handle the Antarctic snow. The weight of Kharkovchanka is about that of a light tank - about 25-30 tonns.

I always thought it was more a function of ground pressure than overall weight, which means even a brute of tank can move quite well over snow and mud if their ground pressure is acceptably low.

During the Northwest European campaign, the Allies were quite surprised to discover that the heavier Panthers and Tigers could actually move and maneuver very well over the muddy surfaces that made up much of the campaigning area durin Autumn 1944, and better than their own lighter tanks.