It's amazing what you can fit into a medium hull if your tech is high enough: 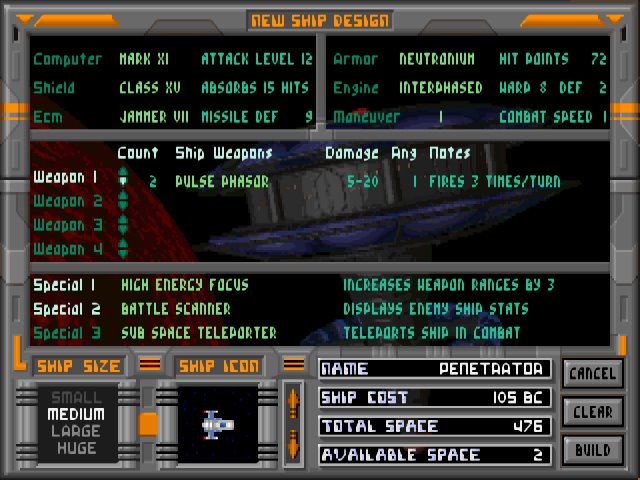 Which was pretty much wasted. The best weapon the  Sakkra had was Ion Cannon.

1 Back to playing MoO?  You successfully tempted me to grab MoM.  It was money very well spent.

3 What do you do when you want to fire antimatter torpedoes in a dungeon?

X-COM base raids with Blaster Launchers?

5 X-COM is the other game from that era that I really hope GOG picks up.

Thanks for selling me on MoO; it's a blast!

Oddly enough, my most recent game (my first Hard level) ended via nearly-identical ships (Mediums with Tri Focus Plasma). And I was busy roasting Sakkra with them, too.

Haven't played any MoO in a while -- I'm trying to figure out this MoM game I somehow got hooked on.

X-Com is on Steam, so I don't know if GoG will get it.

Bummer. Steam scares me; I've heard too many horror stories about it.

To play any game from there, you have to have Steam's malware running in the background on your computer, right? And it does weird things to you? Takes over the HD and CD drive hooks? Stuff like that?

10 I haven't had any experience like that, but I also shied away from it at first due to the whole "what happens to my legal ownership of my games if Steam goes under/changes terms?" thing.  I've had an account for like a couple years now, but only started seriously using it last Christmas, when they had a series of insane sales (including for X-Com).

So far, I haven't had much trouble.  However, I haven't bought anything that I wanted to heavily patch or mod; that would probably be difficult at best with Steam.  You can't (AFAICT) even d/l and apply patches from the developer yourself; you have to wait for Steam to add them to their db and stream them to you.

The game installs do include standalone executable files, and there's some kind of "Steam offline mode" that I've seen mention of, but haven't explored.  I don't know how any of that works, though, or just how much freedom the leash gives you (I can confirm that you can install your games on multiple machines, but without using that "offline mode", you can only log into Steam and launch the games from its app on one box at a time).  I haven't really explored beyond that.  All I can really tell you is that I haven't had Steam cripple a machine yet, and the app doesn't seem to eat up a lot of resources or trigger reboots without warning like Windows loves to do.

I'm still somewhat cautious about it, but some of their sales have just been too good to resist.

Steam is pretty solid; they do require you to run the Steam application in the background (by associating your games with your account this acts as a light form of DRM), but it isn't malware, and it only uses about 13 MB of memory while in the background. The only exception is if you buy a game protected by some harsher form of DRM, like SecuROM, that has been known to cause hardware problems.

Personally I've been using Steam since the beginning of 2004 and I've never had a problem with it. I've got 107 (!) games on Steam; I don't buy boxed games anymore.

Thing is, X-COM is a DOS game. Unless they've done something really strange to it, it would have to run in DOSBOX just like MOO and MOM. And so the only way that Steam could DRM it is by encrypting the executable(s), and decrypting it(them) during the load process and when pieces are used during play.

If that's what they're doing, with a customized/modified version of DOSBOX, I want no part of it.

Well, you can get X-COM from Direct 2 Drive, and not have deal with Steam - that is where I got my copy.  And yes, it uses DOSBox.

I have not seen any DRM in it.

I got the impression the version of X-COM from Steam was not as 're-engineered' as from D2D.  I never played the Steam version, so I can not really say from personal experience the difference, though.

17 I have X-COM through Steam, and have had no problems. It runs under DOSBox, which was set up automatically when Steam loaded the game. Performance has been good, and my machine is nothing special (about 6.5 years old at this point, and not anywhere near top of the line when I bought it).

18 Works fine on Steam for me--who all has experience with D2D, though?  It sounds like it's the same price with less hassle through them...

That D2D offer looks good. They have a seal that says "DRM-free", and I doubt they'd lie about that. It's only $5.

But I wonder if I've got the mental energy to play it any more? I remember it being very intense, and I don't do "intense" very well these days.

20 Just abort any terror mission if you see chrysalids, then.

It can get somewhat intense if you start caring about every individual soldier, especially before you have good armor.

It's not as bad in that respect as JA2, though; I hated losing people in that so much that I would save-scum as much as necessary to pull everybody through.  X-Com's squaddies... not so much.

Unless my favorite high-psi super-marksman Colonel got Blaster Bombed... but at that point I was usually reloading anyways due to the morale failcascade.

I've copied the Steam-purchased copy of X-Com to another machine without, and it runs fine after some doxbox shortcut tweaking. I kind of regret buying it again, as I've got four copies of it or so lying around ...

@Avatar: the Steam dosbox.conf throttles the game to 8000 cycles, which is stupid. If you edit your \Steam\steamapps\common\xcom ufo defense\dosbox.conf file and change [cpu]cycles=auto limit 14000, it's considerably better. You can adjust that number to suit your tastes.

I just started playing this again last week. It still makes me jump in my chair when I'm moving in the dark and thing suddenly shoot at me out of the shadows ...

22 It always amazed me that a turn-based game could be such an adrenaline rush.

23 Bkw, much thanks. Did the trick, and now it's working perfectly.