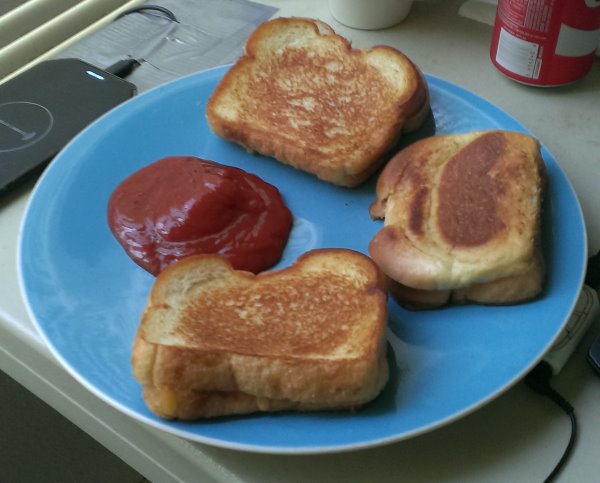 I've always eaten my grilled cheese sandwiches with ketchup. Been doing that since I was a kid. Of course, what I was eating in those days wasn't technically "grilled cheese" because it was Velveeta, which legally speaking isn't cheese.

Now my Grilled Cheese Sandwich is really cheese, however. My cheese is Tillamook Sharp Cheddar. I've tried Vermont cheddar and I've tried Wisconsin cheddar, and to me they just don't measure up. Tillamook is an area on the Oregon coast which is nearly perfect for raising dairy cattle, and the Tillamook County Creamery Association is a farm cooperative that all the dairy farmers belong to that processes their milk and sells it. They do all the things you expect from a dairy (milk, cream, butter, ice cream) but cheese is their main product.

Tillamook sharp cheddar makes good sandwiches. And it's good for everything else that cheese is good for. (I add it to my lasagna.) I grate a pound at a time and keep it in a plastic box in my fridge.

As to the ketchup, a lot of people tell me that's "really weird", but I like it, so to heck with what other people think. (When did I ever care about that?) One of the big problems for me about living in Massachusetts was that I couldn't get Tillamook cheese there. One of the reliefs when I moved to San Diego was that I could get it there. And of course, back here in Beaverton it's readily available.

If you like that sort of thing (I don't) the fields there are also a good place to find Psilocybin mushrooms, or so I've been told.

UPDATE: Around these parts, Tillamook is also famous because of the "Tillamook Burn", one of the largest forest fires in Oregon history. In 1933 350,000 acres went up in smoke. My mom was a kid in Salem at the time, and she said the smoke made it look like night-time.

Starting in the 1950's, there was a massive effort at reforestation, and that finished in the 1970's because they had reforested it all. The area is now known as the "Tillamook State Forest" and they've started logging in it again.

1 I'll have to give that "Tillamook" a try. I love a good grilled cheese sandwich, though I usually dunk mine in Campbell's tomato soup. It's all in how you were raised, I guess.
Can't eat Mac and cheese without the ketchup, though. Practically lived on tuna-mac in college. Mac and cheese, ketchup, tunafish, and peas. Yum! (My 7 year old son loves it, too.)

2 The cheese of my  youth was pinconning, though. Cheese capital of Michigan.

Cheese is made everywhere, of course, but when I think of distinctive cheeses, Michigan is not a state that comes to mind.

(Probably Oregon doesn't either, for most people.)

4 Heh. We (and by "we" I mean "me") go through a pound of Tillamook a week. Love the extra sharp cheddar, but it's pretty friable and tough to cut thin.

5 You eat grilled dogs?  You monster!

6 The "extra sharp" is too strong for me. But that's OK; we don't have to like the same things.

7 Even where I grew up, there was a cheese factory....

The cheese they made was a bit too sharp for my tastes.

8 It's available here, but it looks like only the extra sharp special reserve cheddar is. I wonder what their colby jack is like.

9 It's OK. It's softer and less strongly flavored than the sharp cheddar, and it melts easier.

I meant to make a trip to the Tillamook Cheese Factory this weekend, but got involved in some stuff at home.  I know this is odd, but I still prefer the Kraft singles for grilled cheese sandwiches.  I eat the Tillamook cheddar as a snack.

Their ice cream is to die for, as well.

12 "but when I think of distinctive cheeses, Michigan is not a state that comes to mind."

While it's true that Pinconning IS the cheese making capital of Michigan, it's also very much a provincial capital; Don't blink while driving through, or you'll miss it.

Good cheese, though. I once had a block of 25  year Pinconning, (The sales clerk explained they'd misplaced it in the warehouse.) It was more spice than cheese, it was so sharp, but it was great for grating into other cheese dishes.

I was surprised when the link wasn't autodetected and surprised again when I couldn't edit the result.

And, yes, that's why there is a button labeled "Preview" in plain sight.