I was just visiting James, and he found a picture online of a beautiful woman firing a Barrett long rifle.

I left a couple of comments over there, to the effect that I was certain that the picture was Japanese, though I didn't recognize it, and that "little girl, big gun" was something of a Japanese fetish. And I offered three examples.

I just now dug out frame grabs of those examples, and I'm posting them here. (I don't have anything else to do until the new season starts on Sunday, so why not?)

First is Lynette Bishop in Strike Witches 2, with her Mark I Boys Antitank rifle. This series is set in 1945. 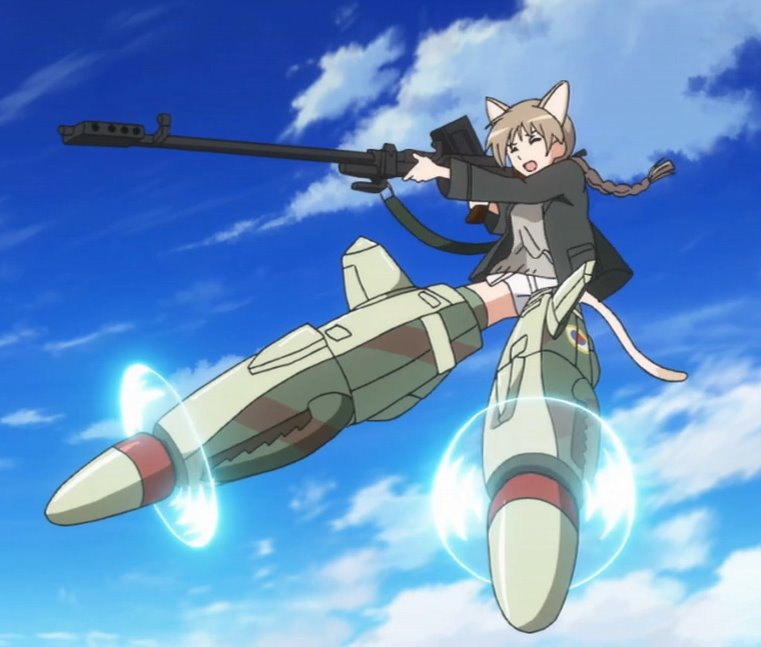 Second is Kotoko-01 in Divergence Eve with some sort of Gatling gun. 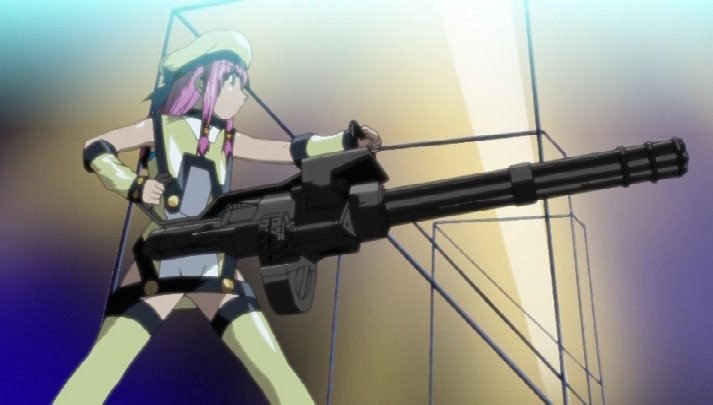 Kotoko is actually an android, and even though she looks like a nine year old girl, she's actually stronger and faster than an adult man. The series is set in 2317. That Gatling gun never shows up again in the series, so it's probably a GE minigun, included as fan service for gun otaku.

Third is another instance of the Barrett. This is from ep 10 of To Aru Majutsu no Index and it's one of the Misaka Sisters. The series setting is more-or-less contemporary. 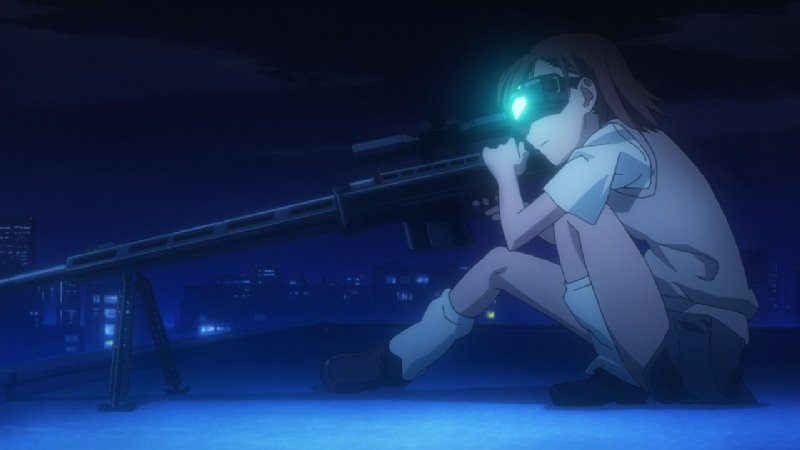 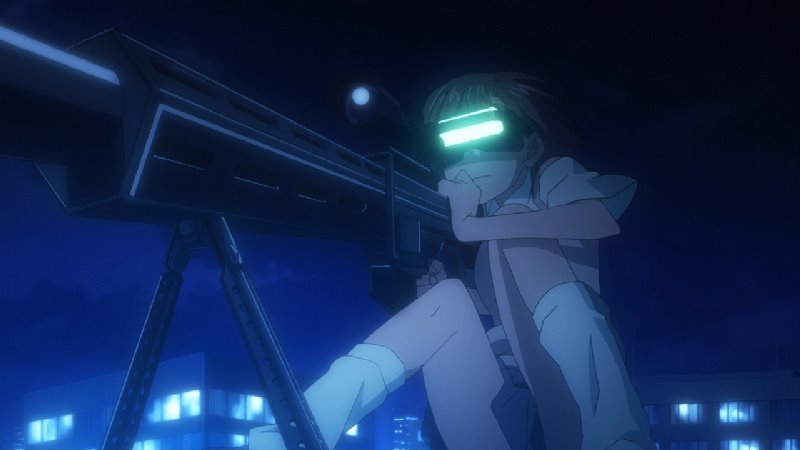 I suppose I could have included Francesca Lucchini from Strike Witches, too, with her 12.7 mm Breda-SAFAT. But every picture of her also features her blue shimapan. I doubt James would be amused. And Yoshika carries a Japanese 12.7 mm machine gun of some kind.

The excuse for how these girls (in Strike Witches) can use such large weapons is that witches are much stronger than normal when they are using their power. Barkhorn takes that to a ridiculous extreme (at one point she picks up a steel girder and throws it about fifty meters), but all of them are far stronger than a man would be.

Kotoko is, as mentioned, an android. As to Misaka, they don't actually show her carrying it, so they kind of duck the issue.

I think that Lynne wins the caliber contest, since the Boys fires a 13.9 mm (.551 inch) bullet. But I don't know if the Boys cartridge was as powerful as the .50 BMG, which is what the Barrett fires. If Wikipedia is to be believed, the .50 BMG had a higher muzzle velocity, which probably more than compensated for the lighter ball.

On the other hand, Lynette uses her magic to guide the bullet, and also to increase the damage it does, so in her hands it's almost like a small cannon. She has been known to create some pretty big holes in the Neuroi with single shots. (In one case it looked like the hole was several feet across.)

All I know for sure is that I don't want to have any of those weapons fired at me.

UPDATE: Of course, there was an entire anime series based on the "little girl, big gun" fetish. But all of those girls were cyborgs IIRC.

And they use some pretty hefty firepower at various times in "Burst Angel".

Aha! I just remembered! The Barrett makes a guest appearance in Najica Blitz Tactics! Back in a bit with another frame grab. 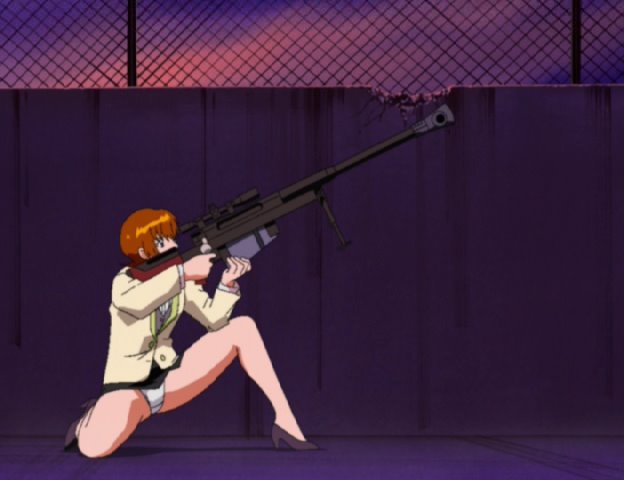 Najica and her panties firing a Barrett. Given that she's a normal woman (albeit trained to the peak of human performance) she shouldn't be able to use such a firing stance. Not to mention that when she fires it, it ought to knock her on her backside. But, well, little else in that series is realistic, so...

There was another example later: 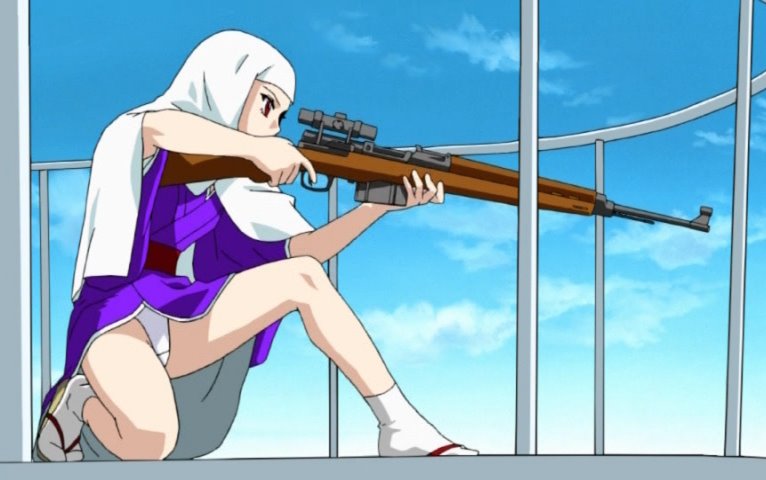 Another girl and her panties. I'm not sure what that rifle is. Something whispers "Russian" to me, but that's probably wrong. Is it a Springfield?

Sorry (sort of) about the panty shots. That's what Najica Blitz Tactics is like, all the way through, from end to end and everywhere in between.

1 I first thought of Mosin-Nagant but maybe it's a M1A1 Carbine? The bullet cartridge (is that how it is called?) feels out of place to me, but I'm an amateur when it comes to guns.

2 Last picture is a German Gewehr 43.  Najica's rifle above looks more like a PGM Hecate II.  The wooden stock with metal cheek rest area is the giveaway.

3 I still haven't gotten around to watching TTGL, but Yoko would seem to be a prime candidate based on the artwork.

4 Then there's this one, that I've never found a bigger copy of.

5 Yoko carries a big gun, but she's not exactly a little girl.

Seras Victoria from Hellsing though...

With a double order of "god-being" added in for spice. . .

9 And in that series I know you won't like that I mentioned in e-mail, High School of the Dead, there are two girls with really big guns, and some pretty big rifles as well. In one scene the hero ends up using one girl's breasts like a sandbag for the rifle.