So I just finished scanning through Infinite Stratos. 44 grabs, and I'll probably be able to use about 35 of them. 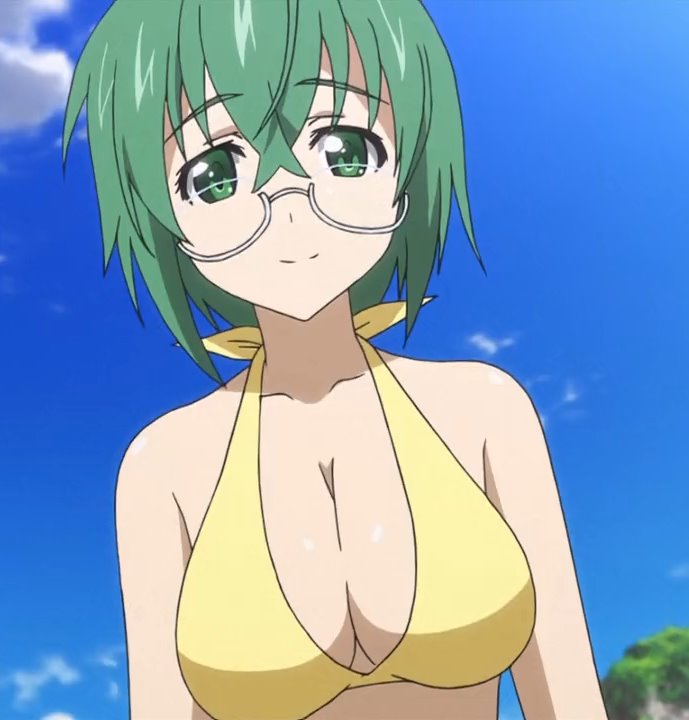 UPDATE: I had the subtitles turned on, so I mostly followed the plot line, such as it was. Ultimately there wasn't really any story except for the harem.

Tabane was the evil genius behind it all, except that she isn't really evil. Looks like she's on a quest to try to prevent the world from being destroyed by nuclear holocaust, and she decided the only way to do that was to give everyone a different, less devastating, way to fight.

She comes off as a loon. Is it an act? Has the weight of responsibility driven her around the bend? Or maybe it takes someone crazy to dream big dreams.

I think maybe it's a bit of all three.

The mecha side of this story was just gizmo fixation, nothing more. And as far as harems go, it was all by the book.

1 Interesting.  I had been distracted by the other three bombshells in that episode (two of which were in that conversation), and missed the import of Tabane's last question,

Those being,
1. Byaushki is actually sentient, and
2. has powers beyond what Tabane knows; further, .  .
3. Ichika can't really control an IS.  Byaushki chooses to do exactly as he commands it to do. (Or would her be more accurate?)

The implications are that Tabane didn't invent the IS core; she reverse engineered .the principles from Core #001 -- which gives rise to the question, "where did it come from?"  And the second question becomes, "what is her plan for Ichika?" Is she trying to set up her sister with her best friend's brother?  Or throw people off the trail, who might be wondering if she's deliberately designing mecha that will only work with women?

Until it regenerated his wound, I was taking the entire conversation between Ichika and the mech to be Ichika's anthropomorphizing the mecha with his sister's personality, while unconscious.  The fact that it made him live up to its (her?) expectations makes me wonder if the harem has a mechanical member too.

Some interesting concepts, and the girls are cute, but seriously, this is more speculation than the series is worth.

It reminded me just a bit of one of the best episodes of the Sakura Wars TV series. Kohran had given up, lost heart.

Her koubu, that is, her steampunk mecha, came to her in disguise. It looked like a young version of Kohran herself. And indeed, Kohran asked the little girl, "Are you named Li Kohran?" The girl gave Kohran a dirty look, and she dropped that.

The little girl convinced Kohran that the koubu's could save the world, but they needed Kohran's help to do it. And afterwards, Kohran's morale was back, and she figured out the final upgrade that made it possible for them all to win.

It reminded me just a little of that, except that Sakura Wars did it a hell of a lot better.

The idea that Tabane found the White Knight, and that all the other units are reverse engineered copies, is an interesting one, and may well be true.

But if so, they hardly made anything out of it. Maybe it was intended to be explored a bit more in a hypothetical sequel.

3 The setting had some depth but the actual show never did more than dip a toe in. Harem show, and that's all. Cute girls (and some laughs with Laura's bridal declaration) but nothing worth continuing.

4 The sequels aren't hypothetical, and there's another bad guy out there (either also, or eventually).  But Ichika continues to be as stupid as they come -- when your cute (opposite sex) roomie starts sitting really close on the bed and discussing getting you and her matching bracelets, she's not just making a fashion statement.

If there were ever a harem lead in need of testosterone therapy, Ichika is it.

He still isn't as clueless as Kio in AsoIku. Let's see: three bodacious babes each, in turn, give Kio a deep kiss, and then all three of them strip off all their clothing right in front of him.

And he still doesn't figure it out.

6 I dunno, at least Kio had the excuse of being distracted by the mission.

Ichika had two of the girls stripping in his room, and once woke up with Laura (the Germanic one with the eye patch) stark naked in his bed -- and then she started wrestling with him!

7 In fairness to Kio, it's an emotional whiplash. He's stammering and blushing when they start stripping right after the kisses, until their explanation shifts his reaction to concern for their safety.

The real clue he missed is the fact that they're stripping on the bridge, when their armored suits are somewhere else. They even took their street clothes with them when they left, since they change back into them after the battle, before returning to glomp him.

8 Meh. I was going to post them at my place, but I can't get the screencaps to work.  It's not just doing captures out of zplayer, I can't even take screen prints.  The behavior is just... bizarre.

I've been using Media Player Classic to get my frame grabs. Problem with Zoom Player is that it nearly always advances one frame before taking a grab, so I don't get the image I wanted. MPC, on the other hand, takes a grab of the frame I'm looking at.

And getting a grab is easy: Alt-I.

10 Zplayer may be the problem, but some of the behavior of my other programs was crazy.  Basically,  any picture frame, be it Paint Shop Pro, or an instance of MS Paint, became a window to the Zplayer scene underneath.  Pull it to the other monitor... black screen.  pull it back... window.  Even if there were something else between them.  Never seen that behavior before.

OK. The way that zplayer is working is that it's using a special mode with your display chip. There's a certain color which means "This is where you put the video you, graphics chip, are creating." The graphics aren't really available in the CPU; they're being created by the graphics chip.

What you've saved is a frame which is full of that color.

By the way, it doesn't have to be that way. If you tell zplayer not to take advantage of the graphics chip features, it'll do all the rendering in the CPU.

I believe that this is required in order to take frame grabs.

13 Depending on the renderer you choose, MPC will exhibit the same behavior, i.e. giving you a screen full of Alpha Channel.  It's easy to not notice this if you have both the player and your graphics program in full screen mode.

14 Ah!  Thanks, I'll try that tonight.  I usually manage to fix it, but I could never figure out which change actually helped.

16 Sigh.  I couldn't find anything like that feature.  Then I noticed I was using zplayer 4.something.  Apparently I grabbed an old backup file after my last system reinstall.

Ok, so I go download the latest and greatest free version, zplayer 8, RC2. And I still can't find it.  So I try a screenshot anyway, and get the message "Can't capture current format."

18 More importantly, it works.  Although it isn't sexy at all.