And done! This episode had three different "the cavalry rides in to save the day" moments. Three of them, and the last one was a huge surprise.

And we get a twist ending! Not a bad way to finish up the series. 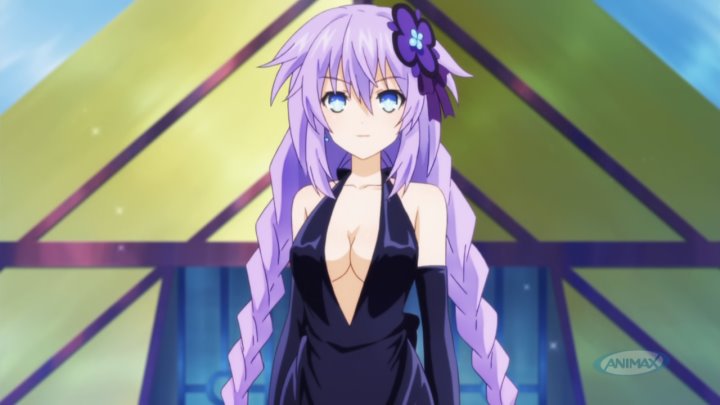 I don't think we ever heard an official goddess name for the revived goddess of Tari, so I'm going to call her Tari. Neptune is fighting her, while Nepgear is working below helping to evacuate people from the area of the fighting. Neptune gets hit several times, but notices that she's taking more damage than she'd expect. And Nepgear, who isn't fighting, is also losing power. Histoire advises Nepgear to power down, leaving more energy for Neptune, but it isn't enough. It's looking like she's about to get killed. Then Noire, Uni, and Vert show up. Uni is carrying 5PB (the idol). And they restore the balance of the fight.

Tari has a device which steals share energy. It's mounted on the bottom of the floating island, and until now Tari has been using it to steal enxergy from Planeptune, but then she changes it to steal from Vert and Noire's nations, too, and they start to weaken. They try to make an attack on it but can't. Tari sets up her "Pong laser" to fire on a group of people on the ground, including IF, Compa, Nepgear, and 5PB. And it fires.

And a second round of cavalry shows up: Rom and Ram use a tremendous ice shield to stop the shot, and Blanc (who figured out the situation, finally) destroys the share-energy stealing device. 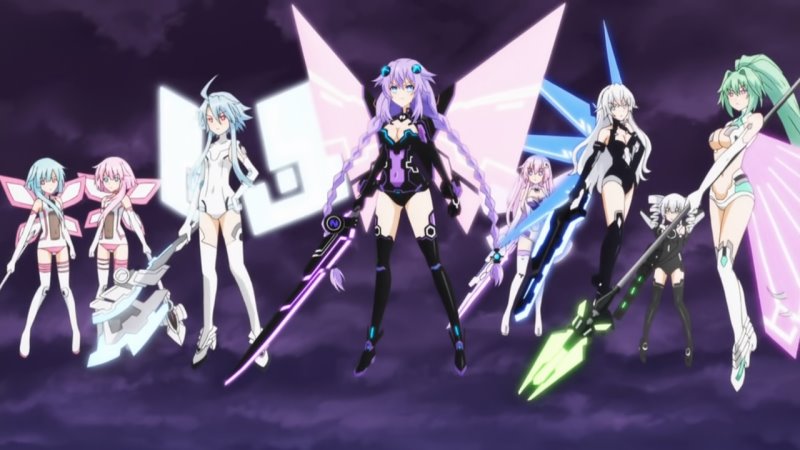 So the gang's all here. But Tari isn't helpless yet. She's the worst kind of bad guy, I might mention, motivated by hatred and seeking only destruction, while sprinkling her dialogue with the occasional shrieking evil laughter. Ick. Anyway. 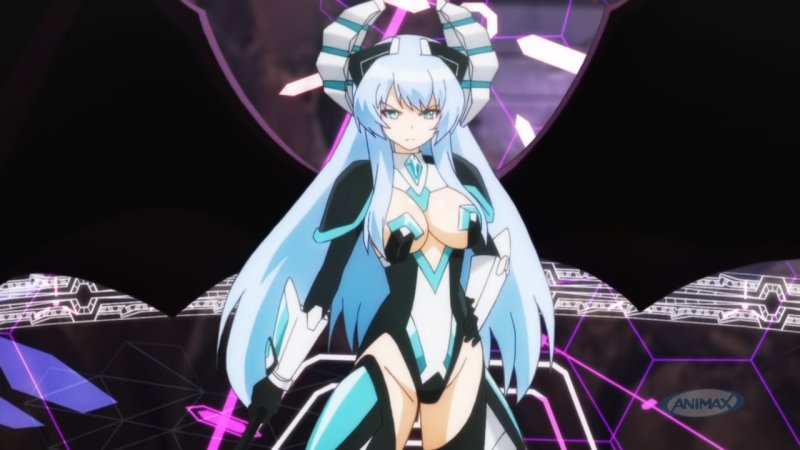 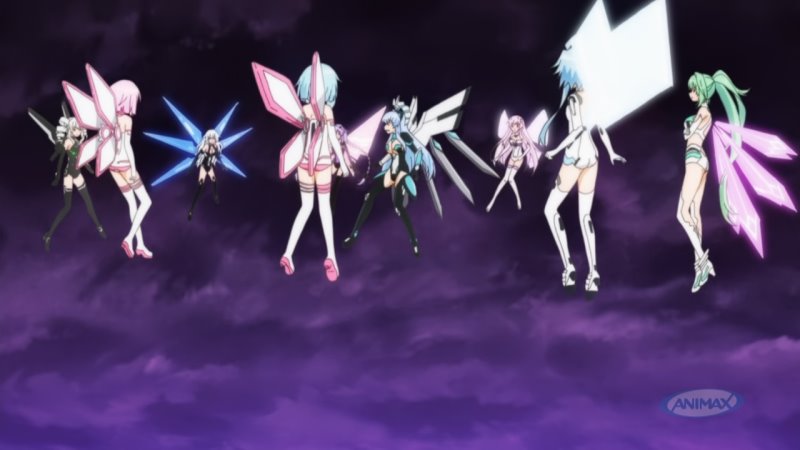 8 goddesses surround her and demand a surrender. But she isn't helpless yet; she's got a jewel on her neck which is full of share energy and she decides to detonate it all at once. If she does it probably would level Planeptune and maybe do a whole lot more damage besides. So the goddesses all hold hands and form a ring around her, to try to contain the energy. 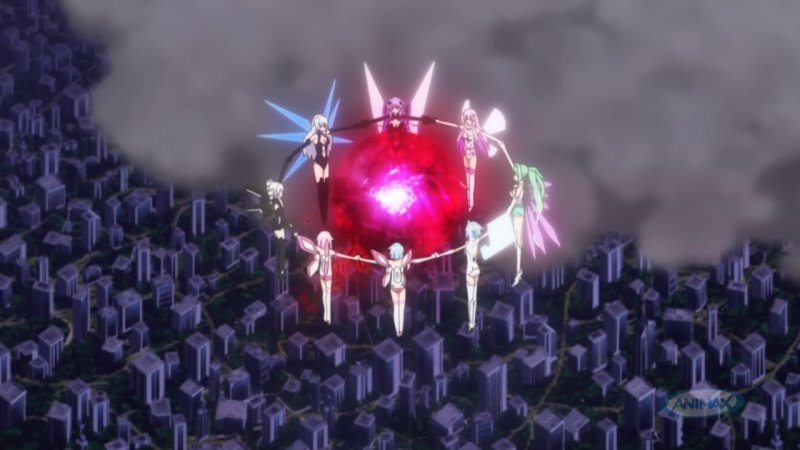 It goes off and the energy is mostly directed upwards harmlessly. Some of it goes down and ruins a pretty big area (which was already evacuated). 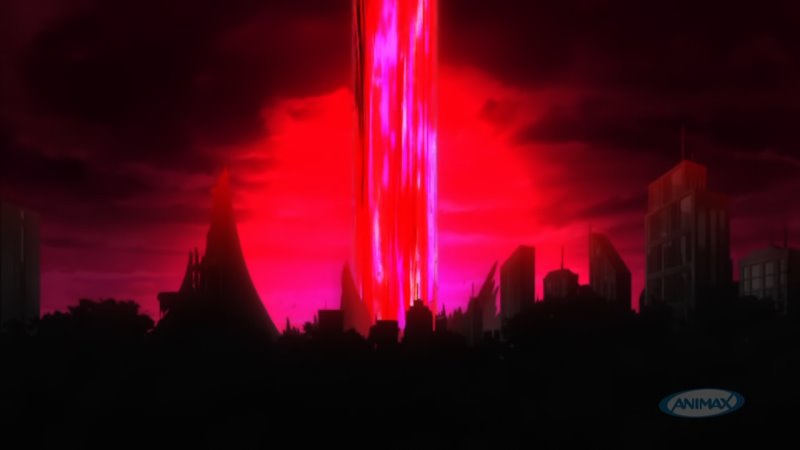 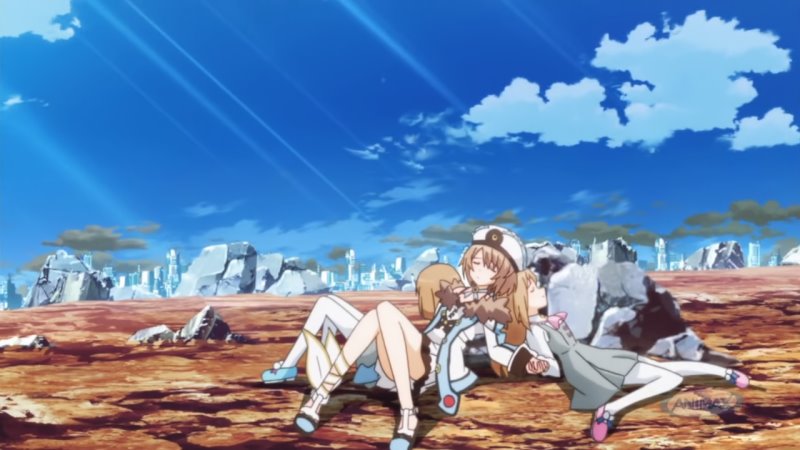 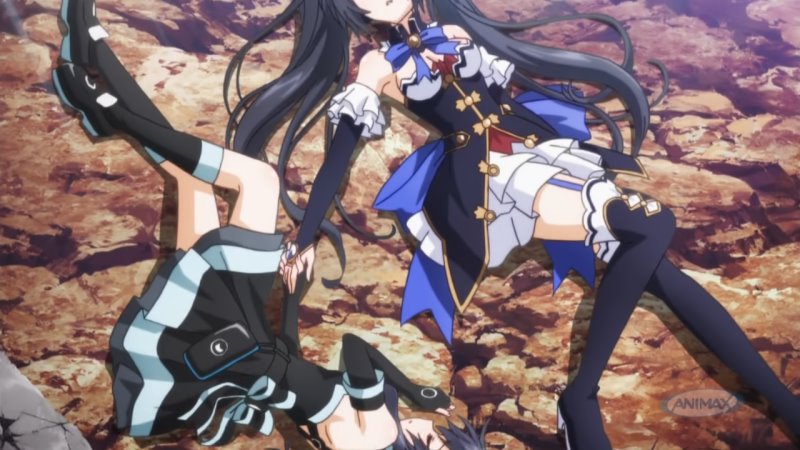 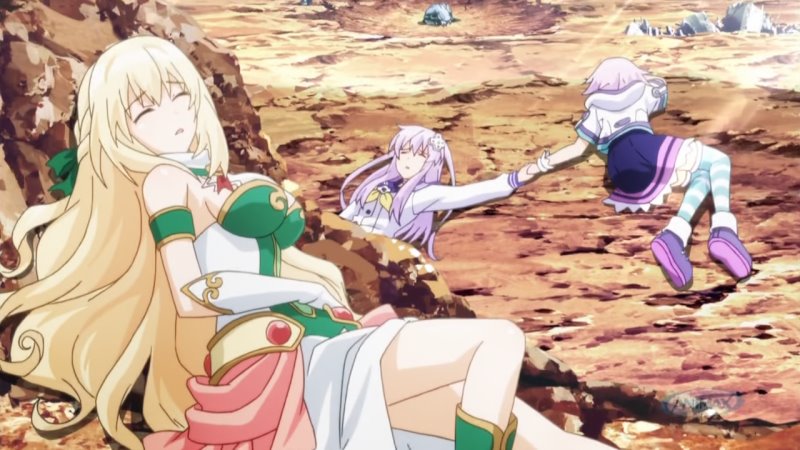 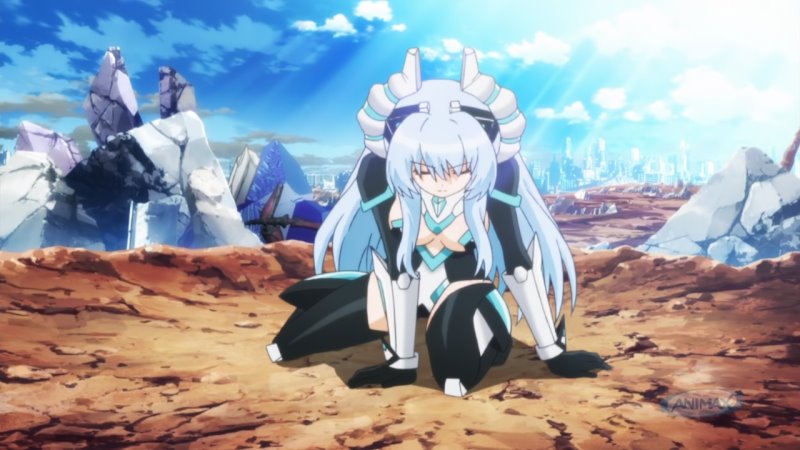 The goddesses all survived but they're all on the ground, out cold, powered down. Tari realizes she still has some energy left and is about to use it to kill them all. And then we get the third cavalry rescue: Arfoire and the mouse show up and use those red crystals to destroy Tari's remaining energy store. And then they walk away. 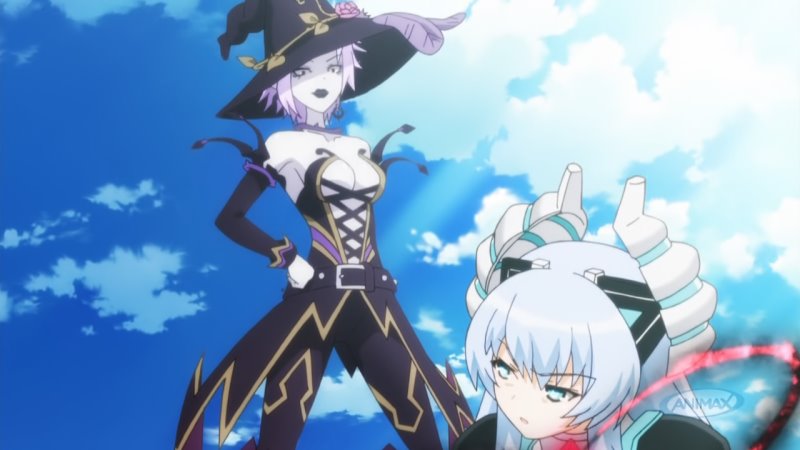 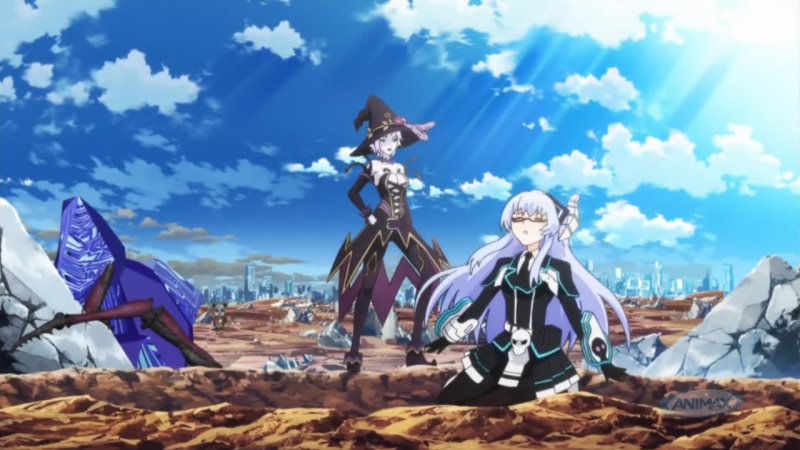 A few months later, Planeptune is being rebuilt, and the neighboring goddesses are invited for a ceremony. Evening gowns all around. Neptune makes an announcement: the treaty is off! They don't need it any more because they've truly become friends. Everyone transforms and heads for the sky for a friendly battle, just for the hell of it. 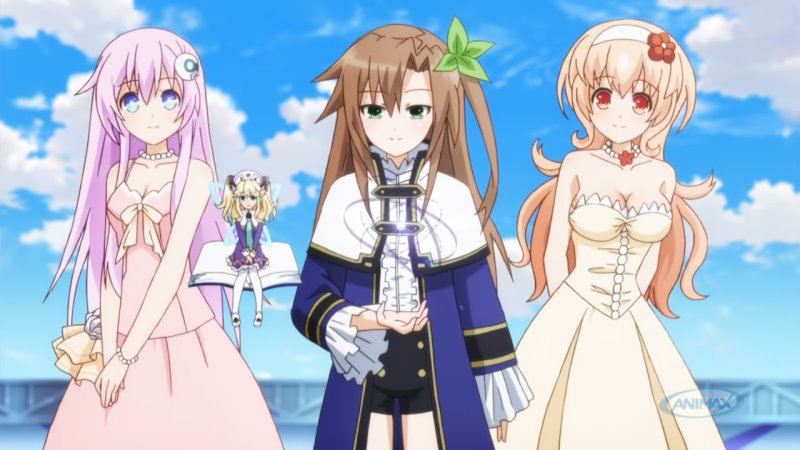 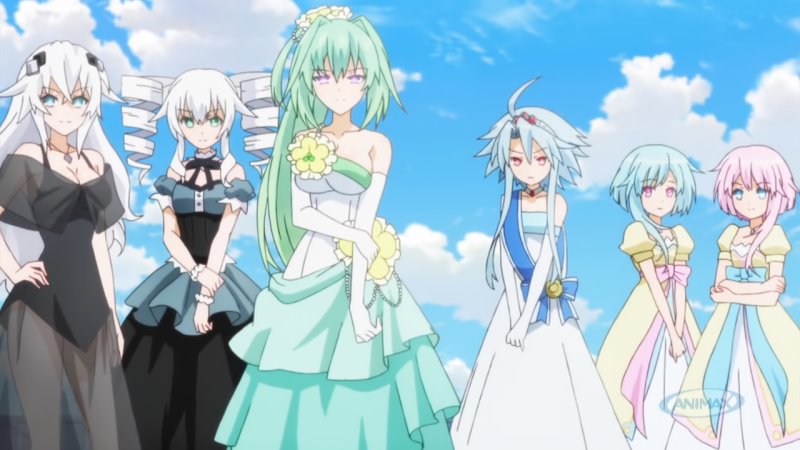 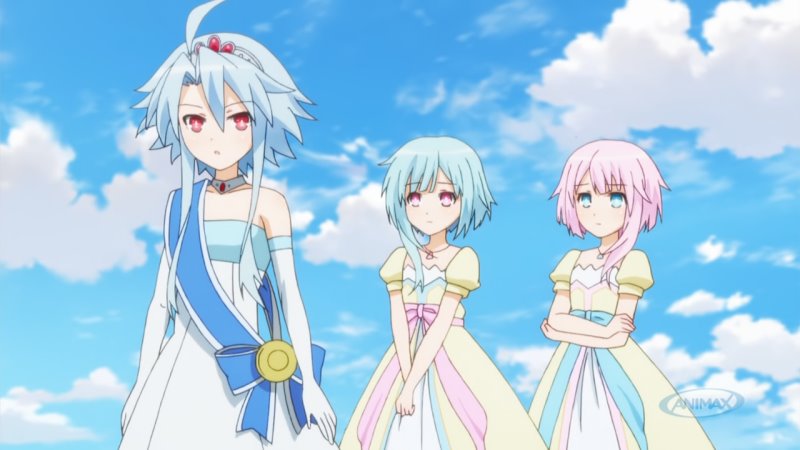 And then lay in the grass together. The End. 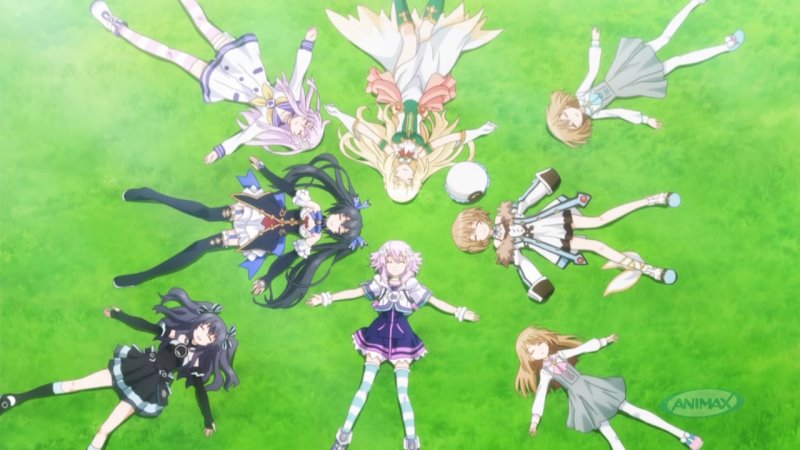 In Neptunia canon, she does not go by anything other than Rei (Last name depends on which release of the game.).

Ironically, the anime Rei actually gives a coffee break version of her motivation from the game for being as crazy as she is.  But given the abbreviated nature of the anime's story compared to the game (As well as the cut characters.), this does work too well.

Note that IF and Compa are part of Planeptune's delegation to the ceremonies - which is an excellent sign of how close they are to Neptune.  There is really only one other human character (Even in the games.) who has anywhere near as close a relationship to a CPU.

Finally, anyone recalling the sight of a witch/mage at the very beginning of Episode 1, when Neptune was announcing the first ceremony, and who never appeared again - that is a cameo by the MAGES. and for whom the company she is based on was one of the music producers for both the games and the series.

...this does NOT work too well.

Is what the line should have said.

3 I like the look of the Gothy witch character in the 11th picture, I was trying to figure out what was so different about her design, then it hit me.  Lips.

4 That's Arfoire and she's a bad guy, except that she saved everyone this time. In episodes 3-5 she tried to kill the (then) four goddesses, and eventually got her butt roundly kicked when the four kid sisters all figured out how to transform and become goddesses themselves. In ep 7 she tried it again and got her butt kicked, this time by Plutia. After which, she seems to have decided that she isn't cut out to be a bad guy, and went into eggplant farming. (Her evil plot in ep 7 involved her buying an eggplant farm.) And until this episode we haven't seen her since.

5 Ah, this was the best cap of her so far, so I didn't really notice her lips earlier.

While trying to look up the other episode reviews, I discovered that the search thingy apparently doesn't include the post titles.  It's also a little difficult to navigate the archives since there are no previous/next post buttons.

I have a soft spot for the villain "saves the day", as they can't conquer the X if its destroyed.  Pretty much WW2 all over again.

Nope, demand life takes back the eggplants because you do not want them.

Since they just announced yet another Neptunia game in the main series...Eggplants are not wanted.

9 ... and you get the lab boys to develop combustible eggplants and use them to burn life's house down.
/Portal2 Ref