What is the deal with this face made of hiragana characters? 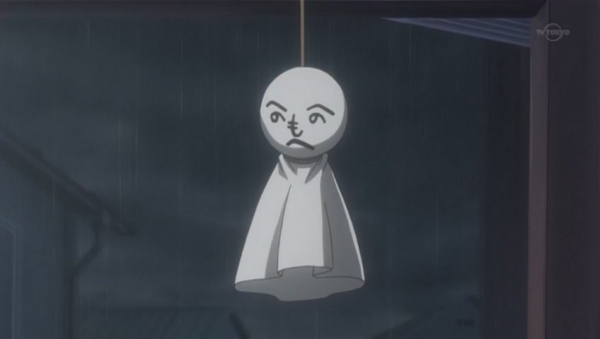 (Which I just stole from here.)

I've seen it in a lot of places. I'm pretty sure it appeared once in Magic Users Club. I know it appeared in Colorful. It was subverted in Tenchi Muyo GXP (because it was painted on the outside of their version of the Death Star).

I've seen it a lot of other places, too, and it's always the same hiragana characters. Yeah, I understand that no looks vaguely like an eye, and he like an eyebrow, and so on and so forth, but I have always wondered if there was something else going on, like it was an anagram of the word for "face", except that it isn't.

UPDATE: I also don't understand why they used も mo for the nose instead of し shi.

1 It's a henohenomoheji, it has no actual meaning, but it's a quick way to draw something resembling a human face even if you have zero artistic talent (here in my country, kids in kindergarden leard to draw a pig in a similar way, by using the letters E,M,e,and two Ws).  The word comes from the hiragana used.

You can try it on wikipedia or google for a full explanation, I dunno if I can post links here.

(To do links, enter the link text, sweep-highlight it, and click the "link" icon just tot he right of the background paint bucket. Then use the popup to enter the link URL.)

3 Is Toradora on your "never to watch" list yet? I did blog it quite a bit, but there are probably spoilers.

I don't particularly harbor any hatred for the show, but it's not the kind of story I find interesting. High School Romance as a genre just isn't my cup of tea.

5 I get turned off by it too recently. Toradora ended well, but now I don't want to start Kimikiss, true tears, and Hatsukoi.

Maybe the problem for me is that my love life didn't start until I entered college, and watching High School Romance shows taunts me about everything I missed.

But I think it's just that I don't really care about it. High school was a long time ago. (I graduated in 1971.)

So a show like that has to offer me something besides simple romance in order to get me interested. Magic, or lots of fan service, or something.

7 I enjoy the high school romance shows because those people have such simple love lives compared to my high school experiences.  And more pleasant ones, mostly.

My first Japanese teacher taught us the henohenomoheji, although I'm not sure why.  She had some odd teaching methods.  She pretty much treated us like kindergarten students, and since we were all adults, it felt a bit peculiar.

(Pete: you thought Toradora ended well?  I loathed the ending!  It spoiled the entire series for me.  Horses for courses, I guess.)

8 I blogged about it, but the server is dead and my focus was on different aspect of it, so here it goes again: it becomes painfuly obvious on the rewatch that the ending of Toradora was prepared as early as in ep.02, and then it just develops from there. However, it's possible to watch the show completely obliviously and be surprised. I wonder if the creators have any inkling about what they've produced, and how watchers may feel shocked and/or cheated by the final episode. Maybe they are so immersed into the story that they have no idea.

9 As long as Ami gets punched in the face every time I rewatch it, I'm happy.

10 I know I'm riding the ragged edge of threadjacking here, but just let me say I was not a Toradora "shipper."  My objections were based on the structure of the resolution of the story.
Toradora discussion END.

11 END, huh. You guys made me to re-read the whole category. How about this: "At first broadcast season’s end, Toradora, not to put too fine a point at it, is a consistently excellent show — at what it does. However, as it focuses like a laser on teenage love, its scope stays narrow, and thus it does not deliver what I would like." It's just like Steven talking above. Is this great minds think alike or what?