I think I might have overdone it this time. I showed up at the grocery store a couple minutes before it opened, and decided I was going to buy a lot of ice for today. Weather forecast is for 103, and it was already sticky and hot at 0700. So I ended up buying 120 pounds of ice. (Yesterday I got 50.)

Getting that home and hauling it all inside was a lot of work, but that part's over now. So there's 4 blocks in the tub in the kitchen right now, and another 8 in my bathtub waiting for their turn.

It's 0900 and it's already over 80 outside. The guys I really pity are the construction workers next door.

UPDATE: What I was thinking when I loaded up the shopping cart was "On a day like today, better to have too much than not enough." I guess I'll find out. 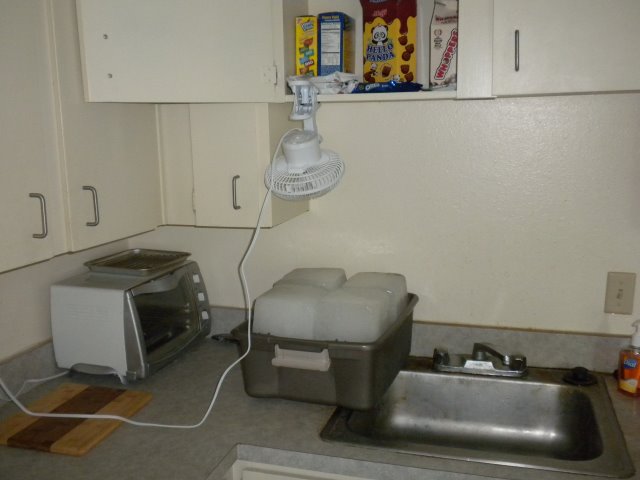 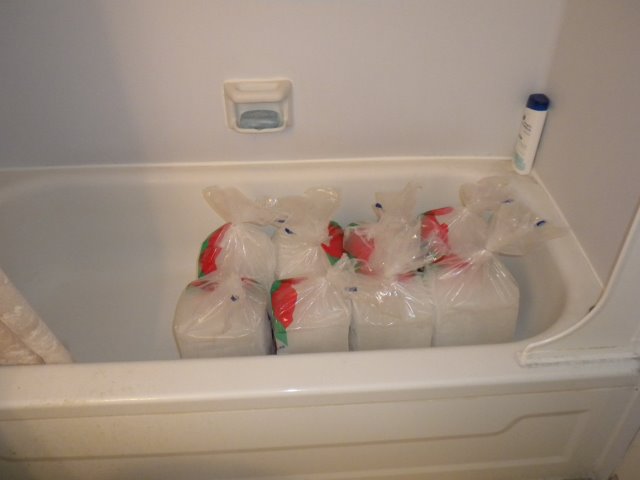 UPDATE: Well, I didn't really quite believe it, but 12 blocks of ice turned out to be about right. Now they're saying it'll be 105 tomorrow, so I think I'll probably do the same again.

1 If you didn't need the extra, you can just fill up the tub and use it to practice for the Polar Bear Club meetings next winter.

2 I escaped today by driving out to the coast and hitting a few beaches between Astoria and Tillamook.  That was definitely preferable to sitting in my house wishing I had air conditioning.  I have no idea what I'll do to survive tomorrow, but there's no way I'm going to be able to keep my house cool enough to be livable.  Last night when I turned in at 1am the thermostat outside my bedroom read 90f, and it was still at 82 when I woke up this morning.  It's at 92 right now, ugh.

$18. Not exactly a bank-breaker, but also not something I'd want to do day after day for a month.

But I won't have to. The heat wave will break on Friday.

Meanwhile, here in Dallas, we're having what passes for a cold snap.

6 Just wonderin' what your break-even point is for a cheapo window AC unit.

7 The question is moot becuase there's no where to mount one here. (And please, dear readers, don't chime in with "But I saw a unit that would work..." or any other attempt to push this question a further notch. "Why don't you buy an air conditioner?" lands firmly in the unwanted realm of "unsolicited suggestions and advice".)

9 That is always welcome!

I could totally whip up a MOT and provide you all the cooling you could ask for.  Just a few minor side effects.

Judicious application of explosives would allow you to get one of those portable units that has a duct that feeds the hot exhaust outside.

What you'd do with the hole when you don't NEED an exhaust port is another question.  Pretend you're bulls-eyeing womp rats in Beggar's Canyon back home, I guess.

13 You're all silly persons.