Well, it's farce. Turns out that everything you think you know about the Cthulhu mythos is a little bent. Or maybe it's this show that's bent. Nyarlathotep is actually the name of an alien race. Our girl Nyaruko is one of them. R'lyeh is the city of insanity? No, it's the name of a theme park. Cthugha? Another alien race. One of them is named Kuko, the Living Flame. She and Nyaruko attended kindergarden together and fought all the time.

Nyaruko is now a member of some sort of interstellar police force. Earth entertainment, specifically Japanese otaku entertainment like manga, anime, and in particular H-games, are prized all over the galaxy. There are some bad guys who are making money by smuggling the stuff, in excess of certain legally-defined limits on how much of it can be shipped off planet. They also are kidnapping kids to sell as toys to the particular rich.

The police force has gotten wind of a plan to get our hero, Mahiro, particularly. Nyaruko has been sent to Earth to protect him.

So how serious is this? Well, does this eyecatch give you some idea? 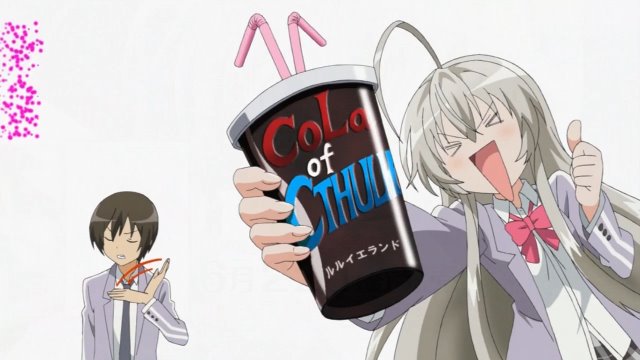 I'll give 'em several points for that one. I'm still chuckling about it. (And double points for it being a good English pun, committed by Japanese writers.)

Nyaruko is the girl that genki-girls look at and say, "Wow, she sure has a lot of energy!" She's the suupa-genki girl. She's also in love with Mahiro; she says it was love at first sight, when she was shown his picture and got assigned to the case.

I spotted several call-outs (e.g. Pokemon, Steel Angel Kurumi), and a couple of times Nyaruko broke the fourth wall. At this point, I would say that the show is intended to be a send-up of Magical Girlfriend shows.

Do I like it? I enjoyed it, mostly, but I really don't like it when Mahiro stabs Nyaruko with a fork, or is otherwise violent with her. That reminded me of the guy with the baseball bat, and it's also kind of an inverse homage to Dokuro-chan.

On the other hand, Mahiro isn't a wimp, and that's all to the good. And despite seeing some of the things which, according to the Cthulhu mythos, should have driven him insane, he is in fact pretty level-headed about it all. (On the other hand, it appears that Lovecraft misinterpreted a hell of a lot, and his reporting wasn't all that accurate. YMMV.) 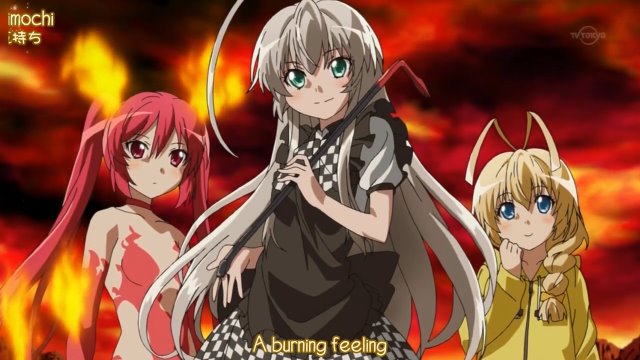 Before it's all over, Kuko is going to be a regular, and there's going to be a blonde girl with power over air, who hasn't shown up yet except for in the OP.

Nyaruko is an interesting one. The second night-gaunt that she fought, she began the fight by kicking him in the balls. After that, the rest was easy. She ain't no angel, that's for sure.

Since this show is pretty much farce and satire, there isn't really going to be any kind of long term plot -- I would assume. The real question is whether it stays as fresh and witty as it was in the first two episodes, or gets stale and starts repeating the jokes. I guess only time will tell.

1 This series has references in pretty much every scene.  At least 10+ other series references per episode.

In episode 2, all of Nyaruko's exclamations were characters from Ideon.

She even referenced the Holy Hand Grenade of Antioch at the start of ep 2.  CR didn't quite catch that joke, though.

"Yuri Moe", quite literally.  It's enjoyable.  We're not talking high art here, but it's worth a watch, to me.

2 They've definitely toned down the forking from the Flash episodes.  Some of them looked like Black Mage from 8-Bit was on the loose.

3 Based on the uniform the kid in yellow is a boy.  Hmm... who in the Cthulhu Mythos is known for wearing yellow?  (Insert SAN loss here)

I was surprised at the number of Cthulhu Mythos references that actually seem to be fairly true to the source materiel.  While Nyaruko and company are... different... the descriptions of the Nightgaunts and the Shantak-bird match pretty closely as to what we see (minus the poke-ball, of course).

You might be right. In other pictures the blonde one wears pants. Whether that means a boy, or a tomboy, I guess we'll have to wait to find out.

5 Well, I think it's fairly obvious that the reason Lovecraft was so inaccurate was that his first encounter with majou shoujo moé resulted in a total San loss.