I have adopted the Rushuna as my official unit of bustiness in female anime characters. Few women measure up (ahem) to Rushuna from Grenadier.

One who does, however, is Mayu from Gosyusho-sama Ninomiya-kun. In absolute terms, her boobs are probably smaller, but she's also smaller, and in terms of how they fit on her frame, she's definitely 1.0 rushunas.

The show itself seems to be a trifle, full of pandering and mainly a fanservice vehicle. Yet instead of giving up on narrative and concentrating on the girls, they seem to persist in trying to tell a story. Aroduc just blogged about ep 10 (spoilers), and asks:

I am continually amazed that, aside from the awful ramen episode, this show continues to have a plot. They have every element here to just say "screw this crap, let’s throw away an episode on the girls squabbling over… a misunderstanding about shampoo… with Ninomiya caught in the middle," but they seem bound and determined to actually have a story and move it along.

If this is a 13-ep series, then there are only three more eps after the one Aroduc blogged about, and it doesn't seem like they're even close to wrapping up the story -- assuming they really are trying to tell one, and not just tossing in things for the hell of it.

So, just for the hell of it, I thought I'd try a nifty poll. If Pixy has given us a native poll ability I don't know about it, so I'm going to use Pollhost. Here's the choices:

1. They're not going to wrap it up at the end of 13 episodes. It'll be like UFO Princess Valkyrie, where the ending is stupid and will leave continuity undamaged so there's plenty of opportunity for sequels.

2. They're going to pull it out, and it's going to be awesome.

3. They're going to try to pull it out, and it's going to be a trainwreck.

UPDATE: J has another candidate who rates a full 1.0 Rushunas. And while we're listing such things, Ai from Popotan also does.

All four of these characters are right at the edge state where anything more would be gross. There are certainly lots of female characters out there with even larger boobs, but it isn't flattering.

Mizuki and Cookie in Gravion, for instance. No thanks.

UPDATE: We haven't had any significant cheesecake around here for a while, so here's a picture of Ai and Mai from Popotan, respectively about 0.95 and 0.1 rushunas. 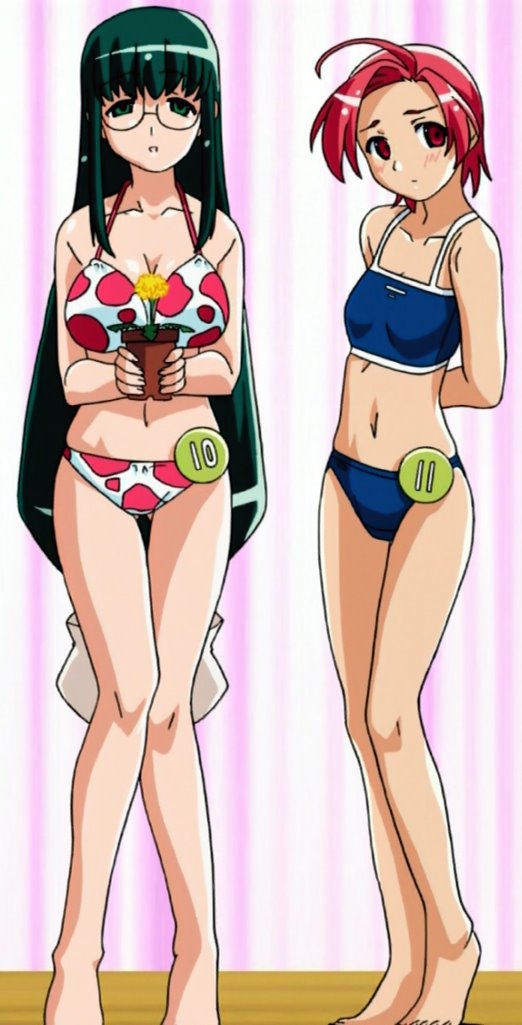 1 How many rushunas does Mizuki Tachibana, from Gravion, rate?

2 Mizuki is up there at about 1.3, which is well into grotesque territory.

In other words, then, it sounds like a rushuna coefficient greater than unity is sub-optimal.

(Please delete my prior post which is highly similar to this one--thank you.)

4 Haven't seen episode 10 yet, but there's definitely a plot there, buried under all the idiocy.  It's not the one I thought I was getting during the head fake of ep. 5, and it doesn't seem designed to reveal a whole lot, but I might be fooled by that.  Ep. 8 annoyed me to the point of fast-forwarding, 9 was a bit more tolerable, but it says something that I'm finding the plot elements involving the other guy to be the most annoying.  The green-haired meganekko who might be a succubus also, on the other hand, is keeping my interest.    And I want to know exactly what the deal was between Shungo and the two girls in childhood.

Can I vote for more than one?  Going down in flames with a hook for a sequel?  (actually, I'll pick one later today after I see #10.)

5 Ok, I've seen it.  Even before the preview, my money on the end of #10 was it being another plot of Reika's.  At least it's red-eyed Reika; she's more interesting.

And as for my vote, I had to be honest. "Who cares...looking at Mayu!"

7 So, rushuna's are units excessively large, seldom used in their entirety, usually supplanted by by decirushunas are centirushunas. . .

So, breast size is a type of capacitance?

The Rushuna is a useful unit in part because it calibrates an acceptable limit. Anything bigger than 1.0 is gross.

9 Well, if anything over 1.0 Rushunas is getting too big, then I have to say that Rushuna herself is about 1.1 Rushunas.  Just a little too big for me.

Of course this would set up a mathematically impossible formula whereby something is not equal to itself, therefore causing physics to be highly annoyed, and look the other way.  The gravitational constant of the universe would probably fail shortly thereafter.

Which might be an alternate explanation of how Rushuna-sized women can run around in animé without backaches or sagging....

10 Ubu, don't think of it as "too big to look good to me", but rather as "the fine line between huge and inhumanly freakish". My personal preference is quite a bit smaller, in the 1.5 Mahoro range.

A Mahoro is equal to a deci-Rushuna, of course.

This site averages more than two thousand page loads per day. How come I can only come up with 23 votes in a poll? Makes me wonder if I have a tiny audience of compulsive reloaders. (sob)

12 I have to admit that I prefer 'em small, too. I think Mai looks better than Ai in that picture, for instance.

Anyway, I'm only on ep 4 of Ninomiya, and all four of those occurred in the last 24 hours. No opinion until I get caught up...

14 In Itsudatte My Santa, the heroine, Mai, first appears as junior high school girl, about 0.1 Rushunas. When she regains her magical power, she turns into her adult form, about 0.7 Rushunas. People thought her first form was cuter, so she appears that way in the OVA only second episode.

15 "This site averages more than two thousand page loads per day. How come I can only come up with 23 votes..."

My site gets over 700 page loads/day. Since April I've received a grand total of *41* comments. Which means (a) I'm saying everything that needs to be said, (b) my readers are a shy bunch, or (c) it's all bots and site scrapers.

16 All I have to say about Ninomiya-kun, is if there's a late season rush on fansubs because this show turns out to actually be good, I will LMAO.

17 In response to Steven's question about usage patterns, I didn't vote, and I visit the page quite a bit. Even when there is no posting going on, I like to check and see if the top rotation has posted something neat that I don't have a copy of. On the other hand, since I do it manually, and don't stay on the internet 24/7, I don't do all that many pages views per day, I think.

18 Probably a lot of my traffic is bots and spiders, but they usually don't load routine site graphics such as the top rotation picture. Because that's hosted on my home server, I can tell how much that gets loaded. It was loaded 757 times yesterday, 306 so far today. ("Today" starts about 0430; that's when this version of Linux runs "once a day" tasks.)

19 For some reason I frequently can't load the pictures from your home site when I visit from work (38.112.2.94). And I often stop by multiple times per day, just to check the comment threads.

My pictures site gets about 10,000 page loads per day, but virtually all of it is through search engines, so the front page only gets about 50. Amusing note: the number one referrer these days is a babe map on Google Maps. The picture of Alesha Oreskovich is one of mine.

20 I gotta imagine a lot of your readers aren't "qualified" to vote. I haven't seen any of the show you're asking about, so...

I mean, if I *had* to vote, I'd vote "Going down in flames", but that's just natural cynicism. (Or "playing the odds", if you prefer. Making a truly good story is a rare skill; ending it sensibly is rarer yet. There's nothing special to anime about that.)

J, I have no idea what your problem might be. The server is up 24/7 except when it reboots, which isn't very often and only takes about 10 minutes. If you can ever load the top image, then it means you're not being bounced by my firewall.

Next time it happens, try a traceroute.

I have noticed some connectivity problems myself in the last couple of days; I think Comcast might be having backbone problems. Maybe that's it. But that's recent and unusual.

23 No such thing as "too big" for me. It's a cartoon, assrape the laws of physics if you have to, just gimme eye candy.

You guys obviously haven't given up all hope of ever attracting a girlfriend yet. And you call yourselves "otaku?" It is to laugh.

24 Tats, you've obviously never seen Eiken if you think there's nothing "too big".