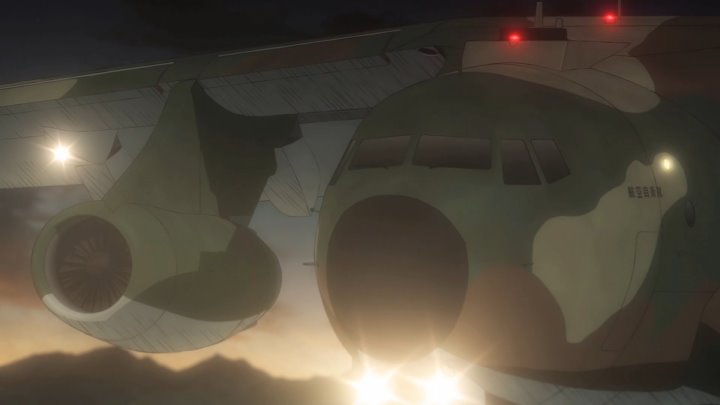 That is a Kawasaki C-1 transport. What I want to know is, how did they get it through the Gate?

I'm getting less and less enthused with this series as it goes along. It's getting harder and harder to give a damn. This episode mostly refocused attention on Lelei, and that still didn't help.

UPDATE: I'm also getting tired of deus ex machinas. Lelei presented her paper and it got a positive response. In other words, she passed. But she isn't a master yet because the current situation has to be resolved, or so they say. Why? There's no excuse in character for why that should be. My guess is that if she's accepted as a master, she has to stay at Rondel and they (the director and original author) don't want her to drop out of the story at this time.

UPDATE: Also, we saw her fighting against her sister, tossing around energy blasts and other things. I don't believe that when the last two attempts were made on her life that she'd just freeze and look scared. She should have blown Shandy to bits, in particular.

UPDATE: Some serious carping, including spoilers, below the fold.

The scene at the presentation rings false from one end to the other. Begin with the first attempt: Itami uses his pistol as a threat, and it works. It shouldn't; the only reason a pistol works as a threat in our world is that everyone knows what pistols are and knows that the threat is real. It's really unlikely that anyone in Rondel even knows about firearms, and they certainly shouldn't have any idea what a pistol is, enough to recognize one.

It doesn't make sense that the old man would stop, anyway. He's been brainwashed into making that attack, and within his world his only goal is to kill Lelei, knowing that it will mean his own doom. He surely doesn't think he'll be able to escape afterwards. So why would he stop, even if exposed and threatened?

Lelei's reaction through all this is completely unbelievable. This is the magic user who calmly stood in front of an ancient flame dragon, with comrades dying all around her, and experimented to see what she could do to hurt it. And when she found a way, then she let loose. She is no shrinking violet, that one. So for instance, when she's stabbed by Shandy and her armor stops the blade, why would Lelei pass out? Why, each time she is attacked, is her only response to gasp and look scared?

Finally, after two attempts on her, why does Itami say "OK, that must be all. Everyone of us who are here to protect you are leaving now." There's no way Itami would do that, and even if he was that stupid there's no way Rory would do it. Rory and Tuka are going to stay with Lelei until she finishes delivering her paper, just for moral support, even if they don't expect any more trouble.

This whole scene was on rails. It was written the way it was because the overall plot line required certain events to happen, and the only way those events would happen is for everyone to go completely out of character.

Word sure traveled fast about Pina's imprisonment.  Granted there were a few days passing here and there.  But why was the order to move the paras so slow in coming?  The decision was made in the prior episode, long before the current series of attacks got started at the Jade Palace.

Also, when you said "deus ex" I expected you to carp on the one that had me rolling my eyes.  "I took advantage of the bridge repairs to send a messenger."  On cue, breathless messenger shows up.

I think they're cutting a LOT out, and this mess is resulting.

1. If everyone was waiting for an attack, why didn't the old wizard get splatted?

2. Itami and his group are famous, so the wizard probably didn't know what a 9mm was, but knew it was something being pointed at him by a guy who killed a dragon. And there was a god's avatar smirking in the background.  Yeah, I'd think twice.

I don't think so. Shandy was brainwashed, and the bad guy knew it would motivate her. I think the bad guy didn't know it was actually going to happen; he lied to Shandy just the same way he lied to everyone else.

3 And by the way, the reason for the delay on the paratroops is to give Itami time to drive to the capital. It's more story rails.

Itami had a bead drawn and plenty of time. At at least had enough time to say "I won't make it in time" and then to have a multitude of magic blasts cast.

5 how did they get it through the Gate?

They took the wings and tail off, then pushed or pulled it through.  They can get multiple tanks abreast through the Gate, a cargo plane fuselage should fit just fine. Then they just reassemble the thing on the other side.

I'm not sure I believe that it could be disassembled like that, and reassembled again, and that it would be sufficiently strong afterwards to be able to fly safely.

In particular, it may be that the wings could be taken off, but I don't believe the tail could be.

I was willing to grant the show the possibility of Phantoms being handled that way, but a transport jet is another matter.

It's done to C-130s for inspection and maintenance purposes.  It's not rot done every day of course, but the tail section is "simply" bolted on.  Sure, you need a crane to remove it, but if you're moving tanks, planes and helicopters through the Gate, a crane or two is just another vehicle.