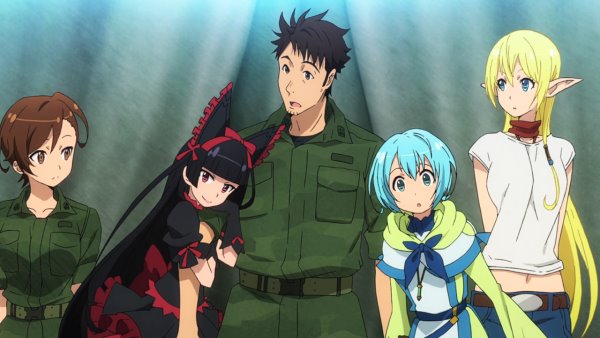 That's our eventual harem, I suspect.

Our hero is named Itami and he's a self-proclaimed Otaku. He says that the reason he has a job is to support his hobby, but the hobby comes first. A bit hyperbolic, to be sure; his job is being a soldier in the JGSDF. But it's his day off and he's going to a shopping district in Ginza hoping to score some doujinshi.

A strange gateway appears in the middle of an intersection, and forces straight out of Tolkien pour through it and start attacking people. 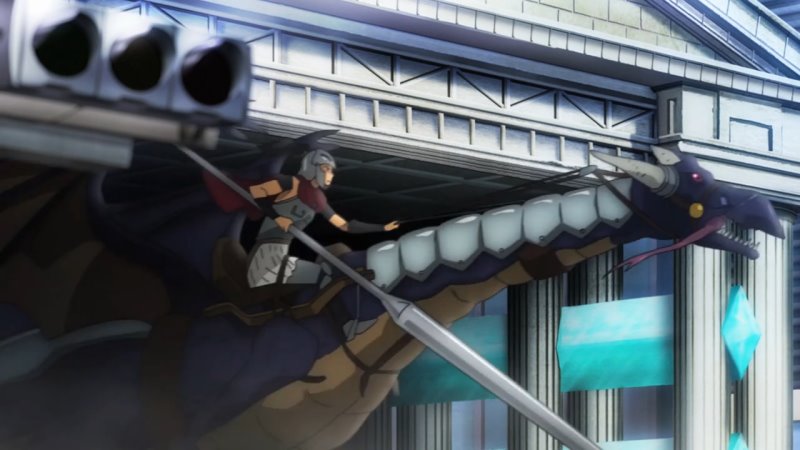 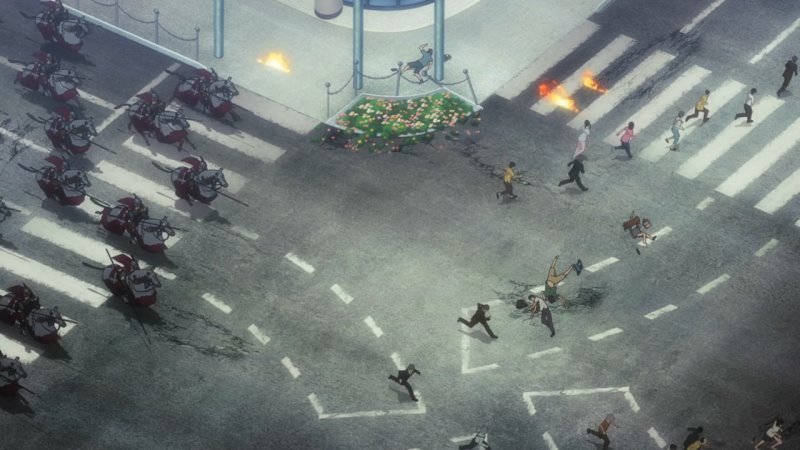 Since these are civilians, a bunch of them get slaughtered. A handful of cops try to fight back with their sidearms. One manages to knock a knight off his horse, but the guy gets up and charges the cop with a short sword. Just before he gets there, Itami grabs him. 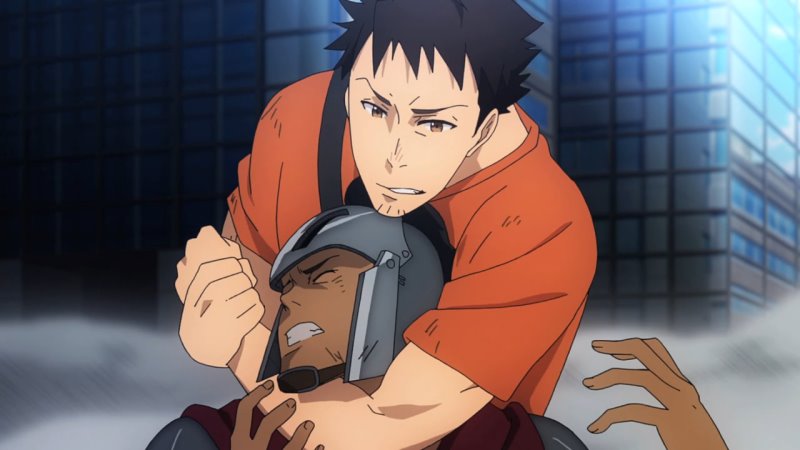 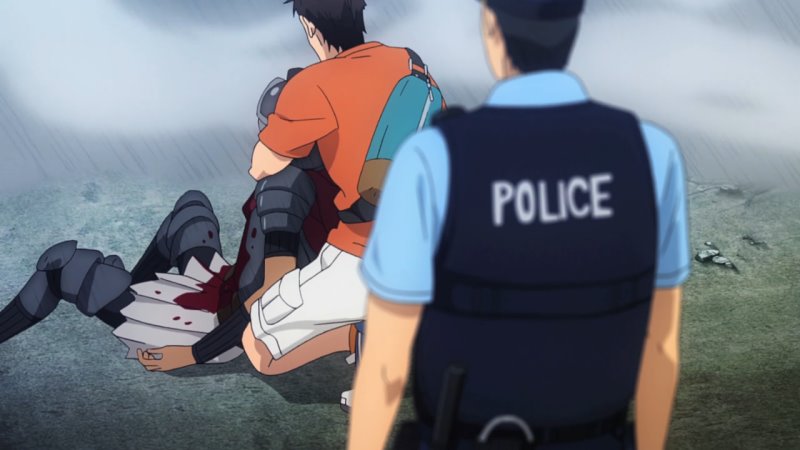 And kills him with his own sword. 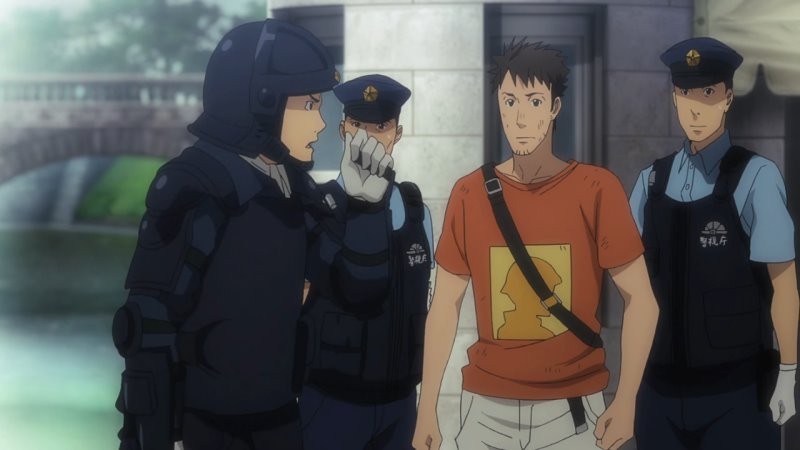 He starts working with the police to manage an evacuation plan. 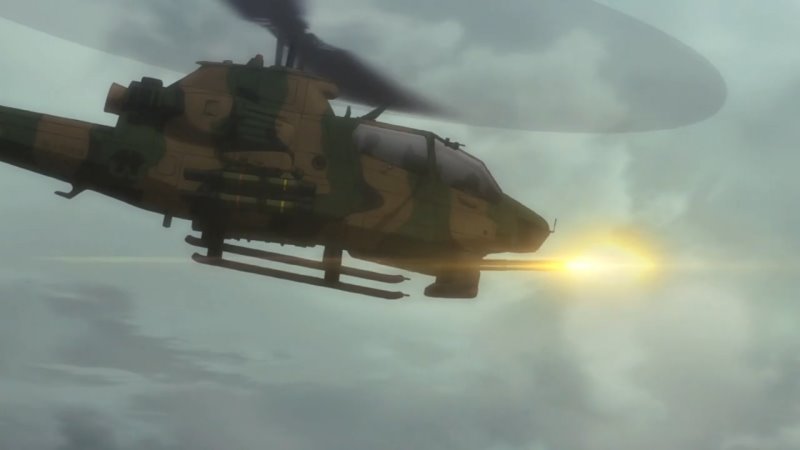 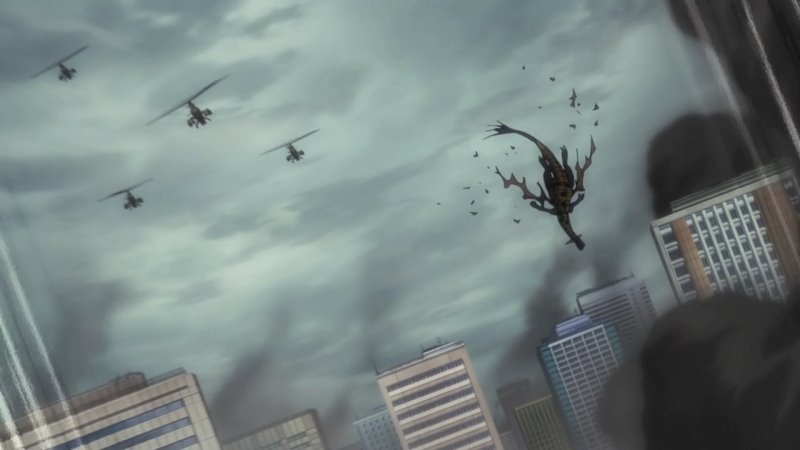 And the JSDF finally gets some heavier units in there to fight back. Once reasonable forces are in place, the attackers get creamed. A dragon, for instance, doesn't stand a chance when fired on by a helicopter's gatling gun. 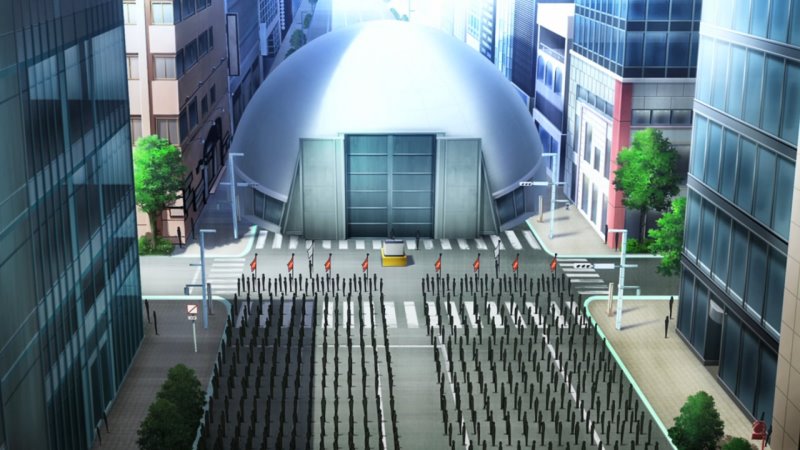 The situation is stabilized, and a dome is built over the gate. Political leaders decide that destroying the gate is too risky because a new one might appear somewhere else. Instead, they want to send a major military force through to try to find out what's going on, and to pacify (and conquer!) what's there.

Itami may be an otaku, but he's proved himself to also be a brave and resourceful fighter. For his actions that day he's decorated, and promoted to 2nd Lieutenant, and ends up in newspapers all over the country.

Three months pass, during which the military plans its attack. I find that plausible; there's a lot to do. They're sending through something equivalent to a reinforced brigade, and it's going to need supply: fuel, food, ammunition, spare parts, the whole kit and kaboodle. Plus there will need to be medical units and plans to evacuate wounded. But the plan is finally done, and it turns out that Itami's unit is one of the first one's going through.

Not too surprisingly, there's a military unit waiting for them on the other side. Considering that the first thing through was a company of tanks, followed by trucks carrying infantry, ordinarily you'd expect the battle to be fast and one-sided. However, what if the defenders have magic users?

I dunno, and we'll find out next time. The episode ended just before the shooting begins.

This reminds me of the book Doomfarers of Coramonde. In that, at one point, revolutionaries (the good guys) are besieged in a fortress. The bad guys can't break in with conventional forces, so their magic user begins the long process of summoning a dragon. Magicians working for the revolutionaries in turn try to summon something to counter it, and for reasons too complicated to go into end up summoning an M-113 APC out of Viet Nam. And then we see the crew of the M-113 fight the dragon.

Itami commands a platoon of 11 people, and once the initial beachhead is secure it looks like the main story is going to be this platoon doing a reconnaissance-in-force, with Itami in command.

This show is a pleasant surprise and for the time being is on my watch list.

I was taken back by how old the main character is.  Usually, series like these have the 'barely an adult' hero as the lead.

Then again, it is Junichi Suwabe voicing the main character, which is awesomeness incarnate.

2 I ran across a couple chapters of the manga way way back. Could be quite good, even if it got somewhat scooped in the meantime with Outbreak Company doing... not the same thing exactly, but up the same alley.

Of course this isn't how you'd want to defend a portal at all. You put observation posts on the other side, along with enough real defense that any potentially hostile force knows that the portal's held in strength; hopefully this prevents surprises. You want to know if something's coming, and you don't want anyone coming at you unknowing (no sense in provoking an "unfortunate border incident" unless that's exactly what you have in mind...)

Well, the unfortunate border incident has already happened, and after the initial incursion, I would want a wide cordon sanitaire between the bad guys and the gate.

Given how lacking the JSDF are for manpower (Consistent short of their recruitment and personnel levels, even in the height of the economic doldrums.), I could imagine someone like Itami in the ranks.

4 Being an otaku isn't really necessarily a reason to kick him out, and given his clear willingness and ability to fight, I'd say he's qualified to be in the army.

That was thoroughly enjoyable.  Even fantasy has to be believable, and not once did I raise an eyebrow nor roll my eyes.  I almost couldn't see the subs for all the Chekhov's Guns and lampshades, but that first ep was very, very well written.

I wanted to hear a little more from the commander of the otherworld invasion force (no recon? dissipate not concentrate?), but hope to learn more as this unfolds.

The action and even the title itself made me think of the original "StarGate" movie.  Had that ring been bigger, and not opened into the inside of a pyramid, I'm sure we would've sent an armored column through, too.

I like what you said about magic-users, Steven.  Turning Clarke's Third Law on its head, any sufficiently advanced magic is indistinguishable from technology.  That will give the natives a fighting chance.  I've high hopes for this show, harem, loli-goths, and all.

Based on the manga based on the original light novel, I found giving the story exposition and various details the benefit of the doubt was well rewarded.  Best example of the latter is the loli-goth: even counting the beasties she's the most eldritch entity introduced in the first volume of the manga, and after her introduction as a character separate from the story, she's mostly obnoxious ... until she isn't.  And then I read something about her later taking on a very important long term role (probably not particularly harem related) that sounded like it would be right up her alley.

There's quite a few stories in all this that converge or are aligned around the protagonist's small unit, some that add the members of harem to the game, except the female NCO? who's starts out as part of it.

Perhaps the best aspect is the not so simple in reality or modern Hollywood quiet competence of so many characters, all perforce dealing with Outside Context Problems ... except of course for the otaku who is used to thinking about concepts like combat dragons.  He gets a variety of good natured ribbing about that, but is generally respected up and down the chain of command.  And then there's nice details like in the preparations for the second patrol, a panel making a point that they're (now?) taking linked .50 BMG  with a 3-4 to 1 mix of Armor-Piercing to Armor-Piercing-Incendiary-Tracer.  Which is by no means overkill....

All in all, I found it done very well, how I'd hope this sort of situation would be handled, and am looking forward to this anime version.

7 One thing I thought was handled beautifully was the little girl with pigtails. I won't say more, but if you've watched the episode you know what I mean.

I do hope that it spares obnoxious attempts at tossing politics into it.  One of the (smaller) things that turned me off Sword Arts Online was Reki Kawahara's attempt to include politics - including exposition about US politics that five minutes on Wikipedia would have proven him false - in the later volumes.  The same goes with the studios producing the anime - even if we acknowledge that they are producing the anime for a Japanese audience, it can get very annoying and very retarded very fast.

Well, there's already been a bit of that. The Japanese parliament declared the place on the far side of the gate to be Japanese territory, because that made it legal for the JSDF to operate there.

But it also meant they can legally try to conquer it and bring it under Japanese rule, a rather nasty revival of Japanese Imperialism.

10 The episode was rather subtle in portraying the Emperor (Or given the current line of succession, should we say Empress?) ordering the doors to the Imperial Palace be opened.  It was actually subtler than the cameo for Overlord which appeared later on.

11 Per the manga, and the common sense which I might say is a bit of an underlying theme, there are necessarily international political issues.  Japan has sole access to all this potential Lebensraum, and other nations are of course ... interested.  The US understands the idea of a frontier; fortunately we're allies.  They and at least some Japanese are worried about the potential for a repeat of 20th Century Imperial Japan, but there's only one major power, inconveniently close, that has a lot of people and not hardly enough good land for them.  As far as I read all this was a background issue, but a worrying one.

OK.  Have read up through chapter 19 in the manga.  I don't think my comments are spoiler-worthy, but below the fold, just in case.

By chapter five, I was thinking, "Too bad, just another D&D meets rifles manga."  By chapter 11 I was reading as fast as I could.  When the mangaka went so far as to include details about the army's logistical tail I'd been wondering about (in Chapter 16), I knew there's something very good here.  Let's hope the anime doesn't screw it up.

14 I'm not quite sure the invaders knew how or why they were there. One of the (Centurions?) made a comment about that. It was also an odd mix of invaders.

This story reminded me of a web novel I read about six years ago, where Hell invaded the human world, not realizing we had advanced weaponry as compared with the time of the Angelic wars as described in the old testament. Armor piercing rounds outclassed the demons and we handily repelled the force. Then we counterattacked.

The invasion  of Heaven came after that.

15 It's reminding me of that Reddit thread about a Marine combat brigade (if memory serves) mysteriously warping to Roman times that was supposedly optioned for a movie.

16 "Modern Weapon goes back in time" is a pretty common trope. There was a TV movie about USS Nimitz going back to just before Pearl Harbor, and an anime about a modern Japanese guided missile destroyer going back to WWII.

The Final Countdown was a 1980 feature film, starring Kirk Douglas, Martin Sheen, and the late Charles Durning.  The anime was Zipang, which was part of Geneon's last gasp of release in the US before they went under.

I rather enjoyed The Final Countdown, for what it was worth.  The anime did not produce the same reaction.

18 It should probably come as no surprise that I've watched (and blogged about!) Zipang!, and while it had some moments, all in all, it's not that good.