So Don and Brickmuppet are all over this show, and lacking anything else to do right now I decided to give it a try. My first reaction? Eyes. Strange eyes. 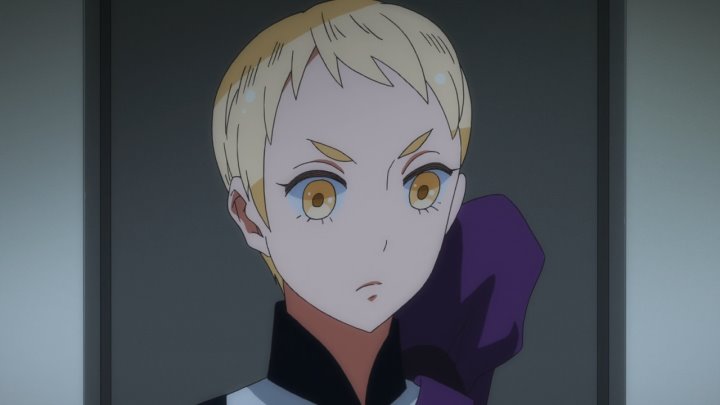 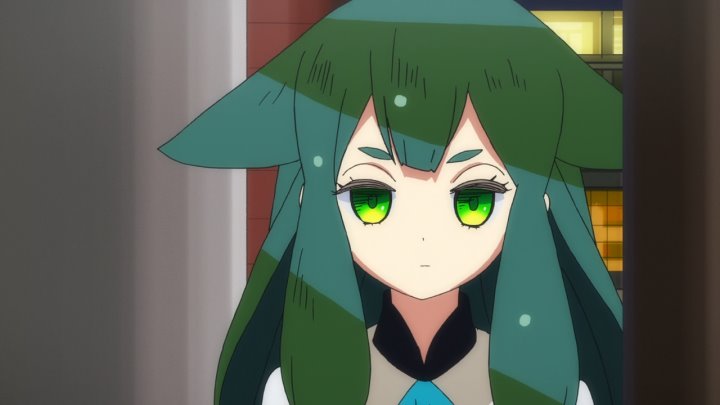 But you get used to that.

It's all about Hajime, who is the protagonist. I can see how people might find her extremely annoying. Your first impression is that she's a complete airhead. But now, after two episodes, I'm not convinced.

When JJ first shows up and makes her into a gatchaman, her reaction is more or less, "Oh, cool!" She enjoys life; she enjoys everything that happens in life. She never seems to become afraid or discouraged; she just goes with the flow. I might describe her as "irreverent", since she isn't overwhelmed by anything or anyone. I could also describe her as "laid back" except that she's too much of a genki-girl for that. And "Cloud Cuckoo-lander" is another possibility, except that there are hints that she's not at all in hyperspace. She knows exactly what's happening to her, and around her; she just isn't excessively impressed by it all. She abides by the legendary two rules:

She does, however, get a bit annoyed sometimes with Sugane, the guy with the yellow eyes, because he's so serious and straitlaced. He never stops to smell the flowers, whereas it seems like Hajime spends all her time smelling the flowers.

Their mission is to hunt for MESS. This is what they look like: 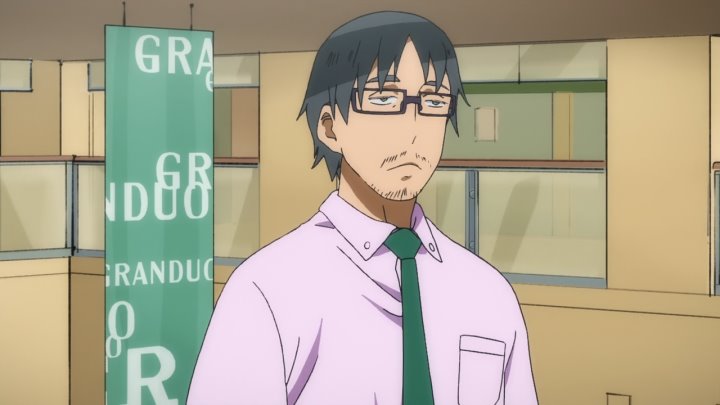 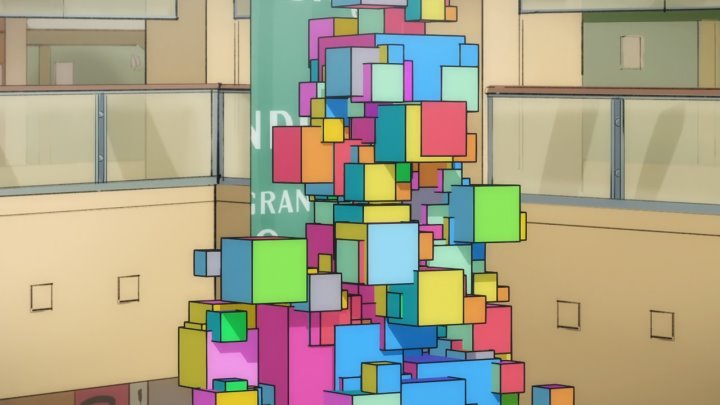 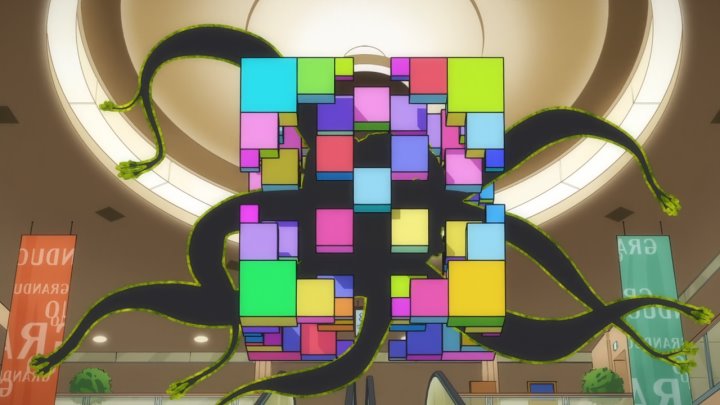 Sugane eventually destroys this one.

The next time one shows up, Hajime transforms: 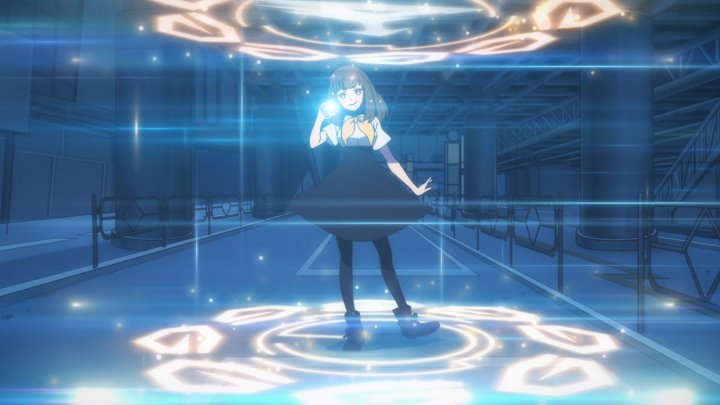 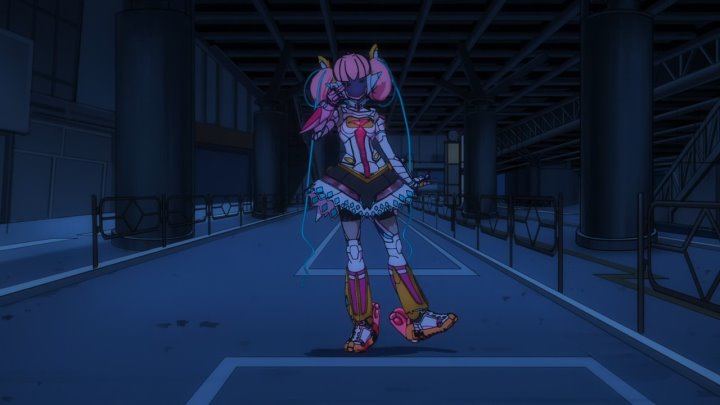 The idea of mechanized armor that looks like Goth-loli fashion is completely in character for Hajime. But Sugane is totally scandalized because Hajime thinks the MESS is cute, and lets it get away. 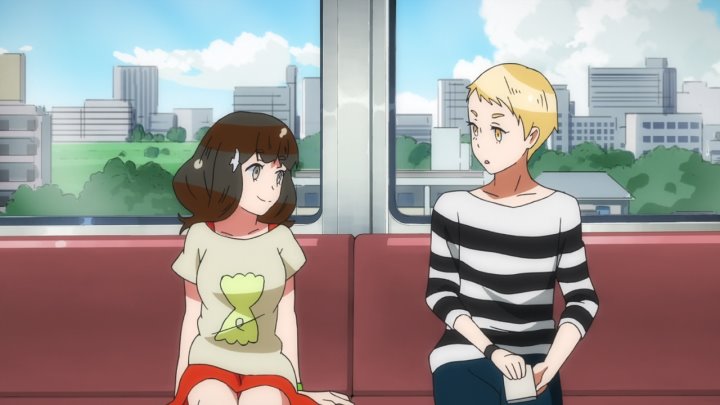 Hajime is actually really quite cute, with a nice figure. (Do we get a beach episode?) And so she invites Sugane along for a rather odd social gathering, where he finds out that she's close friends with the mayor and the chief of police, among others. She met them all with a social game called GALAX that runs on the phones. And oddly enough, the mayor and chief of police are overwhelmed by Hajime, and are glad to be her friends. 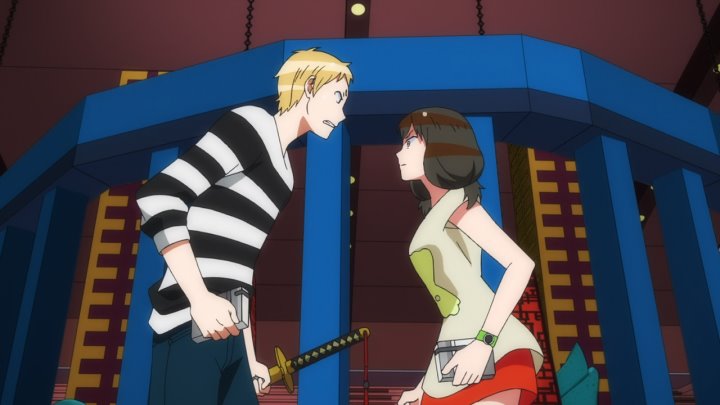 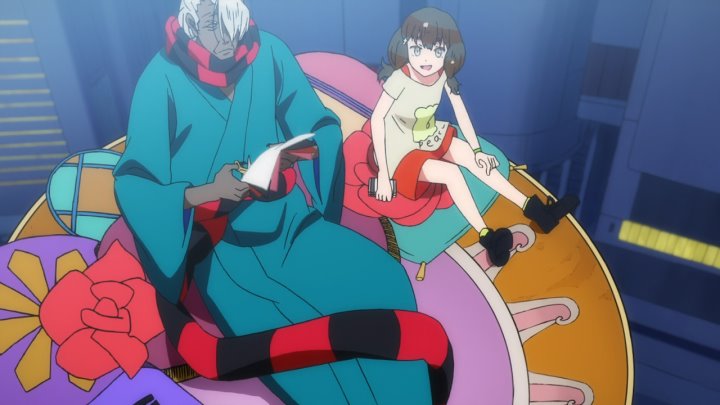 This dude is JJ. The others all are terrified of him, and think of him as some sort of god. Her reaction is the same as for anyone else: "Hi there; how's it going?"

So a third MESS shows up, and JJ sends Sugane and Hajime after it. She uses her power to tie him down temporarily, and ends up making friends with the MESS. 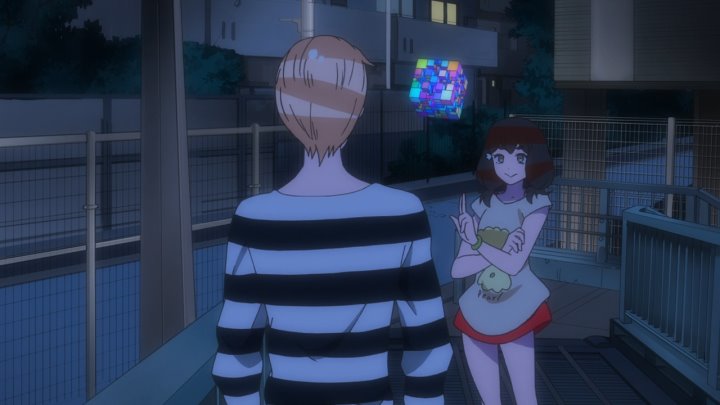 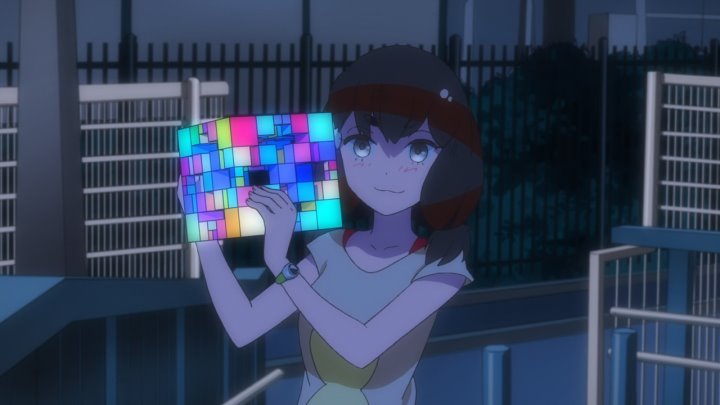 And then at the end of ep 2 we see some baddies, not obviously related to the MESS.

I don't have a clue where they're going with this show, but I think I like Hajime. She could be thoroughly annoying, but she isn't, and I can't really say why, though the voice performance is a lot of it. The seiyuu, Maaya Uchida, is not really known to me. According to her CV, she was Rei in Vividred Operation, and had bit parts in Mouretsu Pirates and was Frenda in Railgun S. None of those characters are at all like this one, so I have to conclude that she's very versatile. It's a challenging part and she's doing an outstanding job of it.

1 So in ep 3 we learn that Rui gave special power to a chosen 100 users of Galax. I wonder if Hajime is one of them? Wouldn't that be an interesting twist?

No. My speculation is wrong.

Hajime is what Rui is trying to turn the rest of the human race into. She's pure good; there's no evil or selfishness in her at all.

Actually, one other thing:

6 Well, they did give him a pointed chin, which is always a stroke against. But they didn't want to make him too manly, because of Jou being the manly one around the place.

7 Hajime sounds like Madoka in Rinne no Lagrange. Here's a picture of cosplaying as Jun the Swan from the original Gatchaman.

9 I pointed that out to Pixy, but he hasn't responded yet.

11 How do you think Hajime would react if one of her friends or comrades were seriously injured in battle?

Have you seen any of the Kenji Nakamura anime Don mentions? I've only seen -The Money of Soul and Possibility Control. It was different.

12 That should have been {C}-The Money of Soul and Possibility Control, with brackets instead of braces. Do brackets make things invisible?

13 If the brackets are around a valid bbcode tag, yes.

This line is between a "c" and "/c" in brackets


So "c" is a tag, but I don't know what for.  Not mentioned in Pixy's instructions, doesn't seem to do anything here, and the only reference I see in 7.3 seconds of googling says it's a synonym for "code".  But it isn't that, because code puts things in this font.

How do you think Hajime would react if one of her friends or comrades were seriously injured in battle?

That happened in episode 7.

15 So does she experience personal growth? A person who is happy all the time would be hard to relate to.

16  So far Hajime hasn't experienced any personal growth. Sugane has changed a bit and Utsutsu has changed a lot, mostly under Hajime's influence.