We're getting a lot of really good shows this season, shows which don't feel like they were created by accessing random pages at the TVTropes site.

I would have said that Madoka Magica was the most original show of the season, until I watched Fractale.

The character designs and art look like they came from Studio Ghibli, and quite frankly that's high praise. The story is science fiction.

It reminds me a bit of the Asimov novel The Naked Sun, which was about a world where every person lived apart. They visited each other quite a lot, but always and only by projecting holograms of themselves, never in person.

In this series there are what are called "doppels". They represent people, but it isn't clear whether they are avatars or simulations. What we do know is that most of them don't look human. 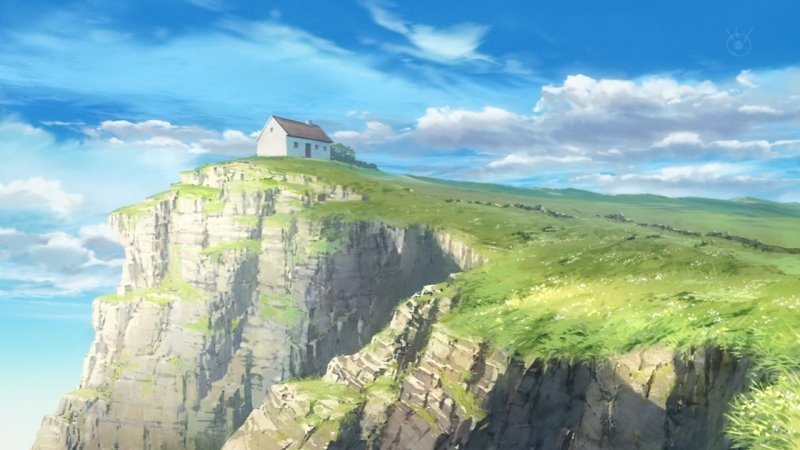 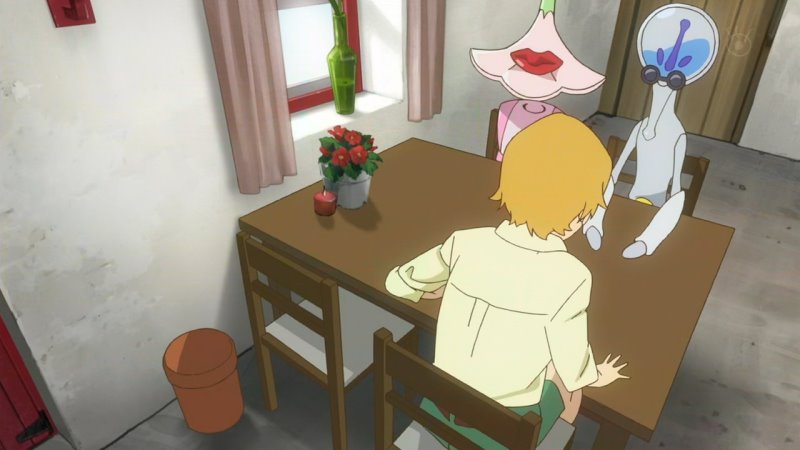 That's his parents. Or their doppels. His parents are both alive, but they live elsewhere, apart from each other as well. 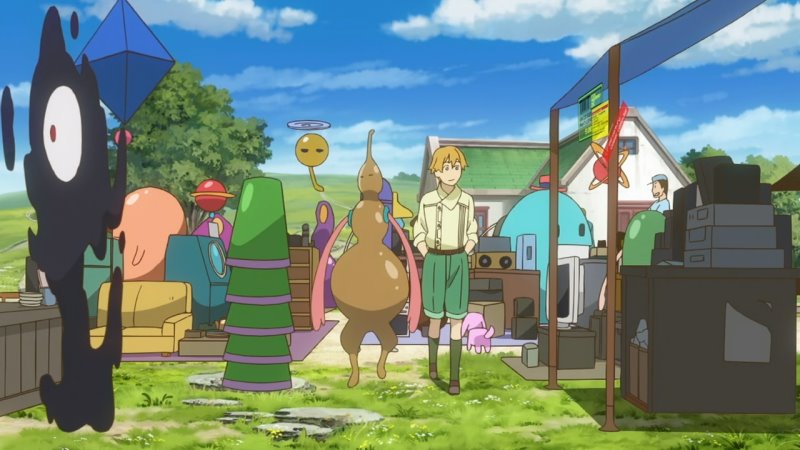 Clain and his best friend (that brown thing) go to a junk sale. Turns out there are some guys there selling "data drugs", which are illegal. They try to get Clain interested, but he refuses. 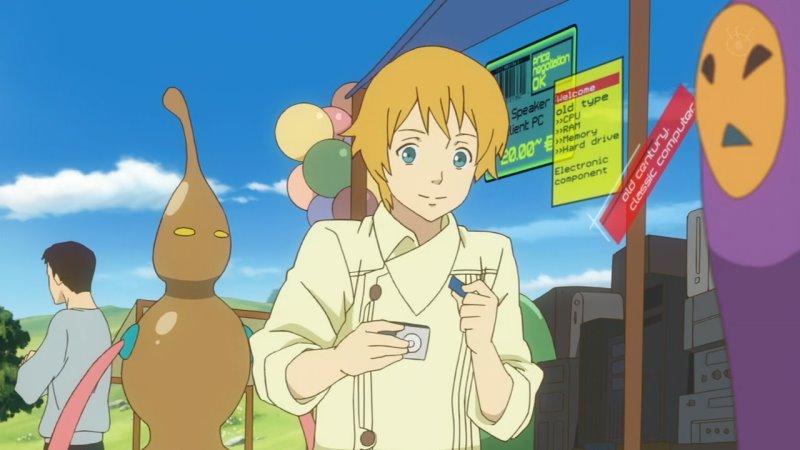 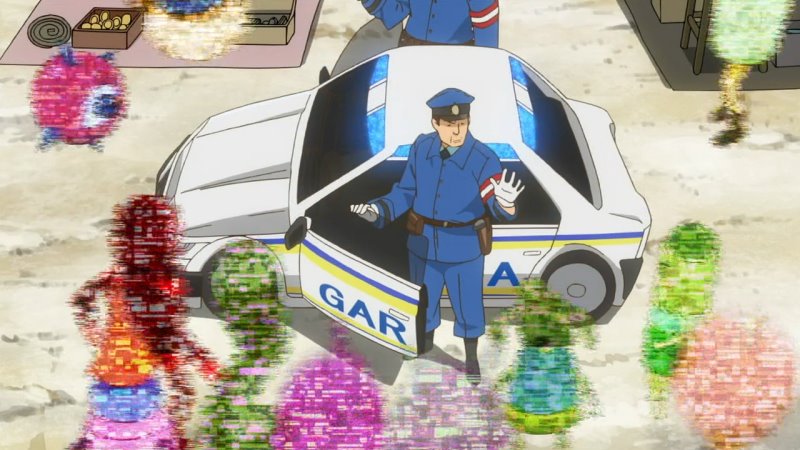 And then cops show up. Real ones. One of them uses a gizmo which turns off all the Doppels (including some that look like normal humans), and there are only four people left. Clain is one of them. The other three (the drug dealers) high-tail it away, carrying a box. The cops chase them, leaving Clain all alone. 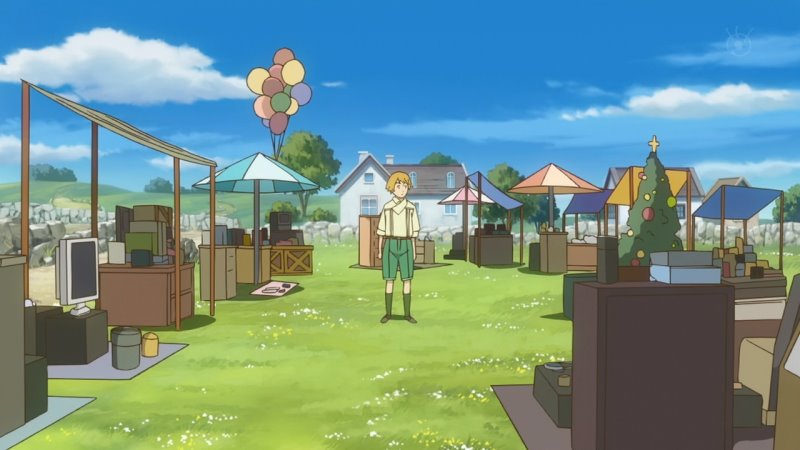 He keeps the chip. And on his way home, he stops at a bench and tries accessing it. Turns out it contains ancient documentation about the Fractale system, the world-wide computer system which, among other things, is responsible for projecting all the doppels.

Comes a certain time, and he has to engage in "prayer". This means he must stand and look at the "day star", a glowing light in the distance that isn't a star. While he's doing so, a girl on a flyer buzzes him. Three other people in some sort of jet-propelled balloon (which looks exactly like something Miyazaki would have drawn) chase her and start shooting at her. 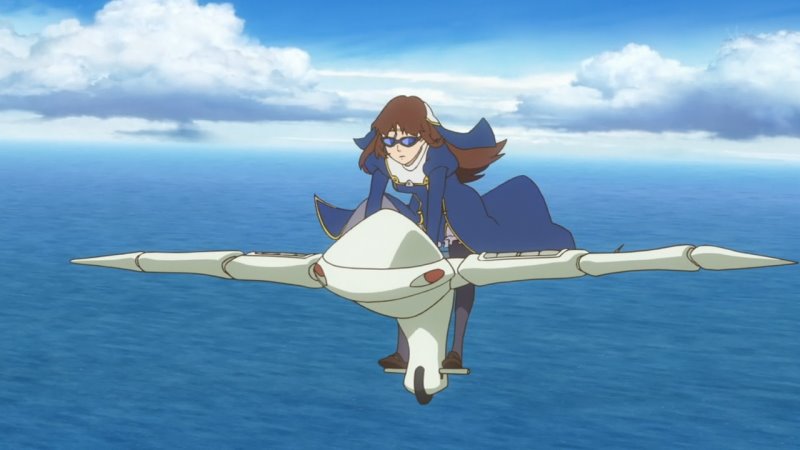 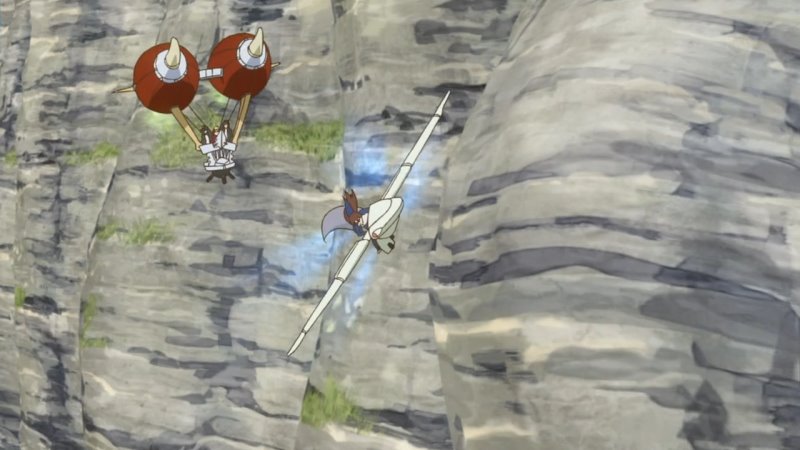 And it goes from there.

I was hooked instantly, and I'm still hooked.

UPDATE: "Let's get Aroduc! He hates everything!"

I'm beginning to worry about Aroduc; he seems to hate everything these days. Even shows that I thought were amazing, all he's got to say is how they are boring and insipid and... on and on like that. He hated this one, too.

Look, a kid who lives alone in an isolated place, and his only companionship is things that don't even look like people, and suddenly a real, live, warm girl ends up in his bedroom, with nothing on above the waist, and eventually passes out in his arms. What exactly would you expect from him? Of course he freaks out. But he doesn't molest her, and he generally treats her well and acts honorably. It's not that he's afraid of cooties, it's that he doesn't know how to behave when around other people in the flesh. It's a plot point; it's an aspect of this world.

1 By George, I think we've finally found a Noitamina show that doesn't suck.  After watching it, I am forced to say about how Clain has been forced into some serious weirdness, "Strange things are afoot at the Circle K."

2 Sounds interesting -- is it on in the US, or do I have to find a torrent?

4 Hm, yes, glad to see Funimation distributing this. I downloaded a torrent, then saw the Funimation logo, and turned the torrent off -- I've already been warned once about Haruhi.

The first thing I noticed was the pennyfarthing bicycle design on the wall next to the stairs. Even without the surrey top, I can't help but think of the Prisoner's Village.

Data drug. Bootleg market. The "perfect" economy, where all you have to do is "pray" each day to have all your needs taken care of. A bumbling but violently intrusive Security force. Promising indeed.


I hope Clain overcomes his awkwardness. I agree, Steven, that the situation justifies it, but I'm more than a little tired of awkward, shy males allied with confident women. Clain needs to find his footing soon.

I'm looking forward to the next episode.

If you want to dramatically represent a hero climbing to his feet, you first have to show him stumbling to his knees. Thus it is that strong heroes quite often begin weak, and seem contemptible in the first episode or two.

The guy in Ichiban Ushrio no Daimaou was like that at the beginning, lost and taken advantage of. By ep 4 he was to his feet, and he never fell again after that.

On the other hand, the guy in Asobi ni Iku Yo was a nebbish at the start and still was mostly a nebbish in the end. (Yeah, what he did was heroic, but he wasn't heroic in doing it, if you understand what I mean.)

6 So I've watched it, and the whole thing gives off a Miyazaki-ish vibe.  This is not automatically a good thing with me.  I've watched most of his films, and well over half are pretentious, preachy, overbearing garbage.  In my opinion, of course... your mileage may vary.  Pretty though.

I do have one question, though... if everybody at the flea market were dopples (save for Our Hero and the drug dealers), where did the merchandise and the stands come from???  Who's minding the shop?  I nearly shut the show off right there.

7 "Thus it is that strong heroes quite often begin weak, and seem contemptible in the first episode or two"

I think the problem is that anime writers and directors most often have their male characters start and end up as nebbishes, compared to female characters that start strong and end strong. It's the contrast that's so galling.

The strong female/weak male trope is so strong that when we see it, our experience has trained us to automatically groan in anticipation. You've noted the problem with harem rom-coms, but I think it goes broader than that.

I'm hoping this one will be different; it does seem promising.

I do have one question, though... if everybody at the flea market were dopples (save for Our Hero and the drug dealers), where did the merchandise and the stands come from???  Who's minding the shop?

It seems as if the doppels are not just holographic projections. They have mass and can manipulate objects.

If so, then the doppels are the ones who set it up.

9 The problem of a virtual/real world interaction brings up Denno Coil.  In that story, people interacted with the virtual world through displays that looked like ordinary glasses. Over and over again, though, you saw them do things that suggested they could at least feel what they were seeing. I can't remember if there was ever an instance where a virtual object actually affected an inanimate, real object.

My hypothesis was that the glasses didn't create their effects through projection against the lenses, but rather directly manipulated the wearers' brains.

Still: I remember people striking virtual objects, and having their hand stop.

Mostly, I think this was carelessness, and it bothered the heck out of me.

Failing to explain this sort of thing, or to be consistent with it, is indeed irritating.

10 It seems as if the doppels are not just holographic projections. They have mass and can manipulate objects.

I rewatched the flea market scene, and the two scenes with Our Hero's parents, and if there's any evidence of the doppels handling objects, I didn't see it.  The closest that I saw was Our Hero's datadog putting it's front paws on O.H's leg... which didn't react in any way.

In the aerial shot of the flea market, there are more human-looking things than just the druggies, but they seem to disappear when the cops de-rez the doppels.

So I think my question still stands: where did the merchandise and the stands come from?  Maybe it'll be explained, but I doubt it.

11 One piece of evidence is when Clain's buddy hangs on his shoulders, Clain can feel it.