This is what Pete wants for Christmas.

UPDATE: Well, this post has become about the Dallas tornados, and so be it. This post from a local TV station seems to be getting updated regularly.

Arlington TX reports 7 injured and 150 homes damaged. So far no fatalities reported, which is certainly a blessing.

There's a picture in that post of a hailstone the size of a baseball. If one of those hit you, it would really hurt! (If it hit your head, it might well kill you.) 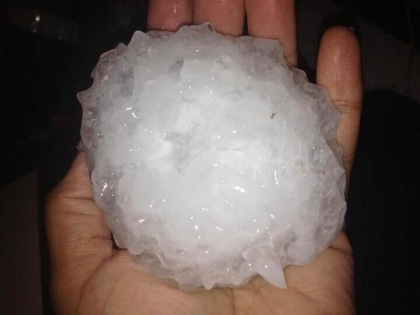 Oh, and Avatar, please report in!

1 Specifications are amazing, only 970 lbs empty weight despite having 2 engines.

2 It is at best, a novelty vehicle.  Consider that you cannot afford to let it get in a vehicle accident on the highway.  Not even the slightest bump.

3 Here's a man who truly doesn't understand the Rule of Cool.

5 That's not really a laughing matter.

7 The mee.nu data center is in Dallas, isn't it? Sure hope Pixy keeps off-site backups!

8 Based on the reports, the worst tornadoes concentrated on the south side of Dallas, while some also hit around Arlington and due east of Dallas itself.  IIRC, Avatar is further north, up near Dr. Heinous, whom I just talked to, and he didn't even realize the weather was that bad until the sirens went off.

9 Oh, and I prefer my "rule of cool" to be in fiction.  In real life, the "rule of practical" has a nasty way of trumping the really, really cool stuff.  Which may be why we watch anime...ya think?

At least until science gives us flying magical catgirls.

10 There haven't been any deaths reported so far, which is testimony to the effectiveness of the early warning system. Obviously that could change, but if there was carnage we'd be hearing about it already.

11 Holy carp.
Do have off-site backups, but they're not up to date.  Fixing that NOW.

12 Ubu, you keep your head down. Looks like that storm front is going to hit Houston tomorrow.

13 That's not really a laughing matter.

It's a case of laugh or sob uncontrollably, Steven.

(I'll also admit that I didn't realize just how bad the damage was...)

14 I'm okay, wasn't bad here. Sorry, had an endoscopy this morning, got back home right before the storm hit. Heard the siren going off... had some red on the weather radar but no hail and no damage. Got some excellent nap action going...

16 Avatar, if you can sleep through a tornado, I think you've taken napping a whole new level...

17 Well, when I woke up, there were some short union guys outside wanting to ask me about some kind of snack food. And everything's in color suddenly...

I did get a nice pair of slippers out of it, though.

18 I have slept through a couple of hurricanes, but I've never been through a tornado. (And if I never do, that'll be just fine with me.)

19 Hmm. Looks like it will get here around 5-6am, at which point I'm likely to be asleep.  Maybe I should invest in one of these.  Sadly, not even Amazon could get it here in time, which is why we still have brick-and-mortar options. Not that Frys is open at this time of night either.

About 15 years ago, I had the opportunity to see first-hand what an F5 could do (after the fact).  The only way we could tell where the homes were supposed to be as opposed to where the streets were, was that the streets were a little lower.  Everything had been razed down to the slab--so much for "an interior room."  Half a subdivision was turned into sticks and bricks - but not one person was killed.

20 Link was supposed to be to weather alert radios at Amazon.  Too tired to figure out what went wrong.

21 I have an aviation handheld, Vertex VXA-220, which includes a bonus weather band. However, New Mexico essentially has no natural hazards. Also, there is no alert-trigger function, so I cannot keep it on all the time.

22 I'm in north Dallas.  I didn't even know the weather was running amuck yesterday until I heard the sirens.   Of course, I was inside all day, at work on my computer, with the window shades drawn (the glare on my monitor irritates me).

In fact, if it hadn't been for the sirens,and people calling to see if I was ok I never would have known anything was happening.

23 It was lively here.  Just as lively as the tornadoes that tore things up about five years ago. Granted, I'm on southwest Fort Wort side of things.  The advantage there is that most storms form on the west side of the metroplex and get nasty about the middle/east side of Fort Worth and into Arlington/Dallas.  Doesn't mean I don't get nervous when the sirens start going off.  Survived a tornado as a young kid in South Dakota... never quite liked them since. (Friends needled me about not wanting to watch the movie Twister...)