Spoilers and screencaps for a surprisingly good show below the fold.

UPDATE: I just had someone ask me where I found this. Walla!

Studio Fantasia is not one of the anime producers that come to mind when you think of "high quality" or "big budget" or "major fan following. It sure as hell ain't KyoAni or J.C. Staff or Gainax. In fact, it may not be the kind of studio that comes to mind at all. Like as not you've never heard of them.

Yet they've provided me with a lot more good times than I think I realized. They are the ones reponsible for Kirameki Project, so that alone gets them points. They also did Stratos 4, which was reasonably decent in the original TV series plus the first OVA. (After that it went off the rails into full-blown X-files mode, and crashed and burned.) They're also responsible for Agent Aika and Najica Blitz Tactics.

And they did this show. It's warped. It's an otaku in-joke. It's sort of a spinoff of a Gonzo series called Yukikaze. But not really very much so.

Otaku in-joke shows are hit-or-miss. Probably the biggest and best-known is Genshiken, along with its spinoff Kujibiki Unbalance. There's also Comic Party and more obscure stuff like Animation Runner Kuromi.

Kirameki Project is a parody, too, but what was most notable about it was that it wasn't nasty. It loved what it parodied; it wasn't mean about it. And so it is with Rescue Me Mave-chan. Even as I laughed at what was going on, and laughed at myself (for I was also a target of the parody), yet I also found myself getting into the story and starting to care about the characters. Which is pretty amazing for a show that only ran half an hour. 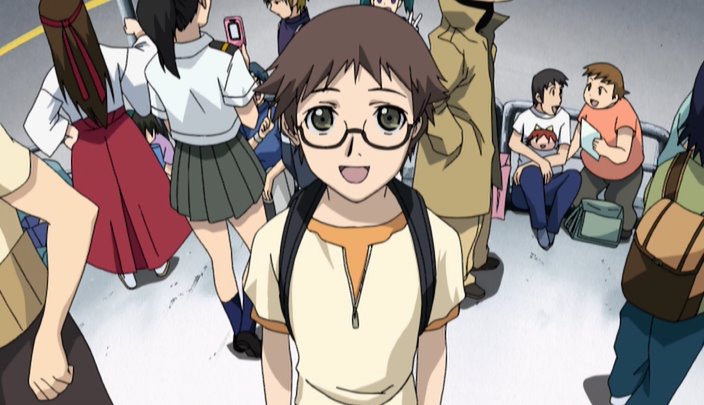 Rei really is a dork. He buys a Stratos 4 DVD and gets into the series. It becomes a life-changing moment for him. (!!) Eventually he hears about a convention about Stratos 4 and about Yukikaze and decides to go to it. All alone. 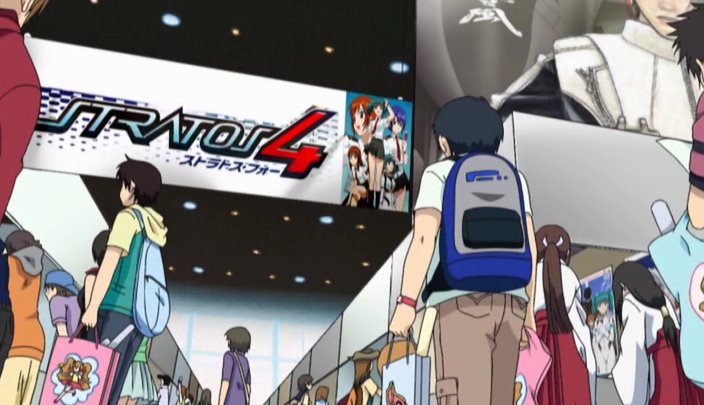 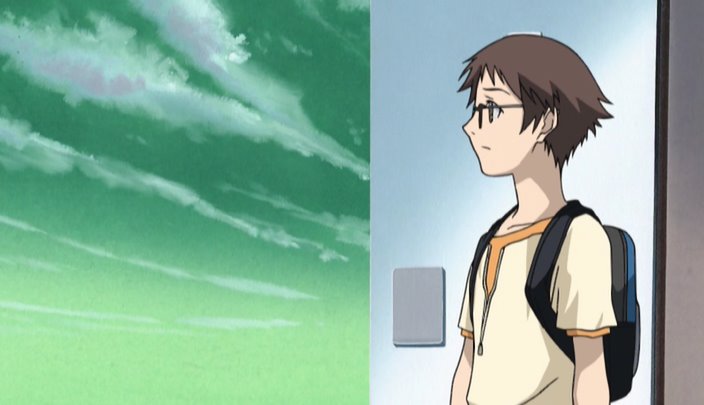 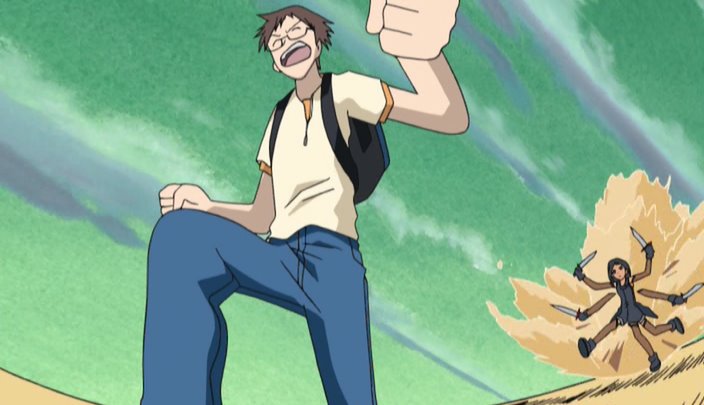 This guy doesn't go out much. He isn't hikikomori but he's the kind of guy who might end up that way. He gets to the con and starts getting panicky. So he heads to the bathroom, and pushes through the door -- and ends up in the middle of a desert. And something starts shooting at him. It's a girl. He flees, and she chases waving a couple of short swrds, telling him to stop so that she can kill him. 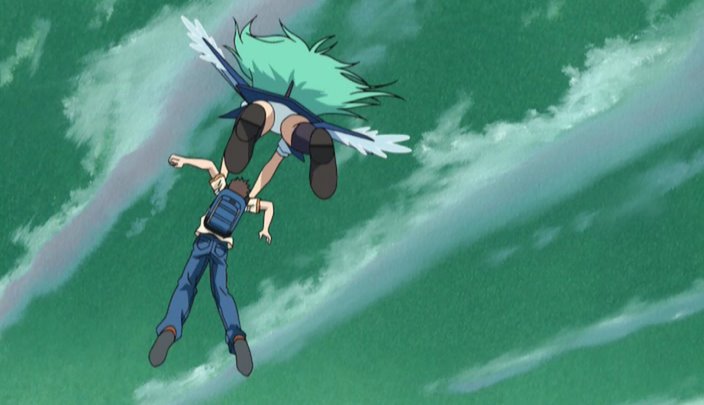 Then something wearing white panties swoops in and picks him up. The one who was chasing him takes off in pursuit.

Rei looks up and this is what he sees: 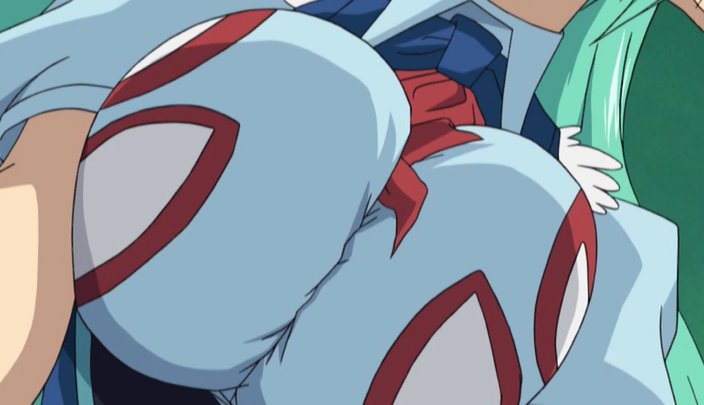 This is what she really looks like, Super Sylph: 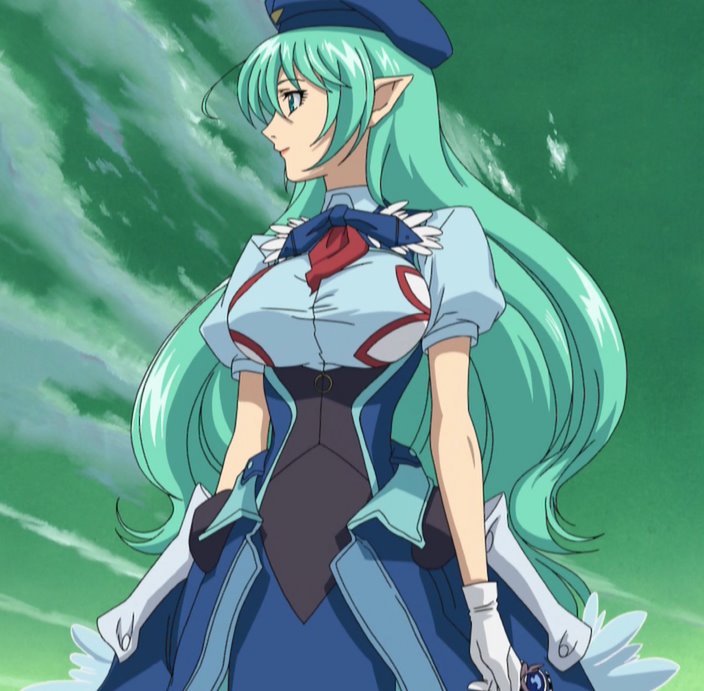 And this is the one who was trying to kill him, Mave-chan: 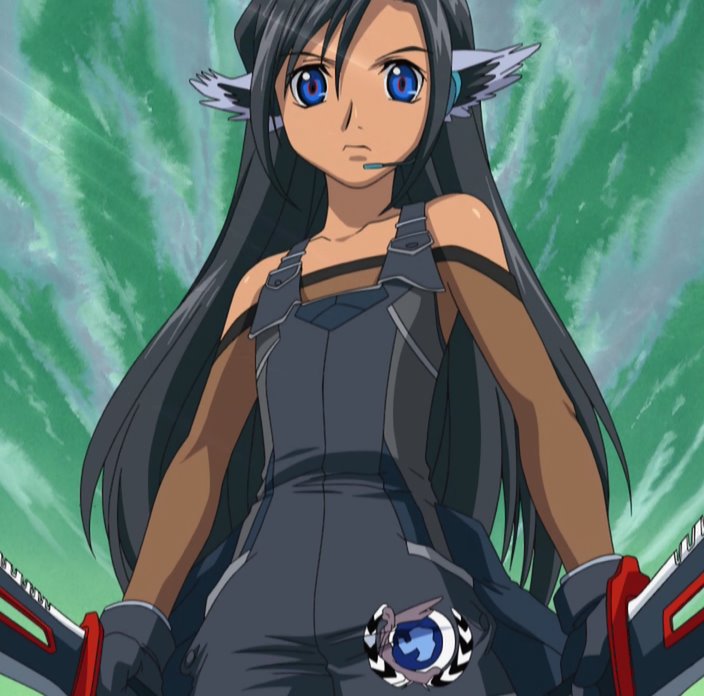 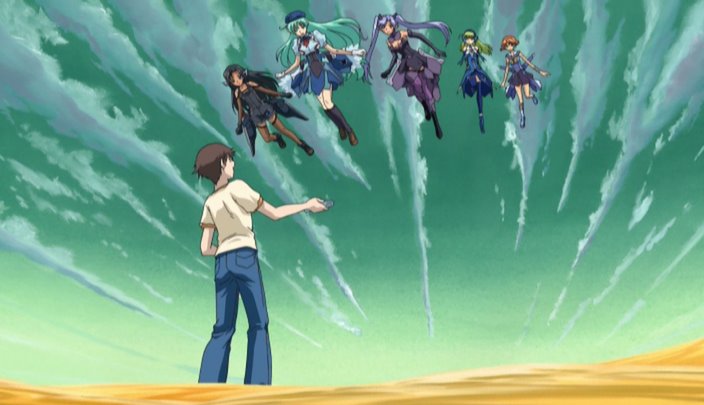 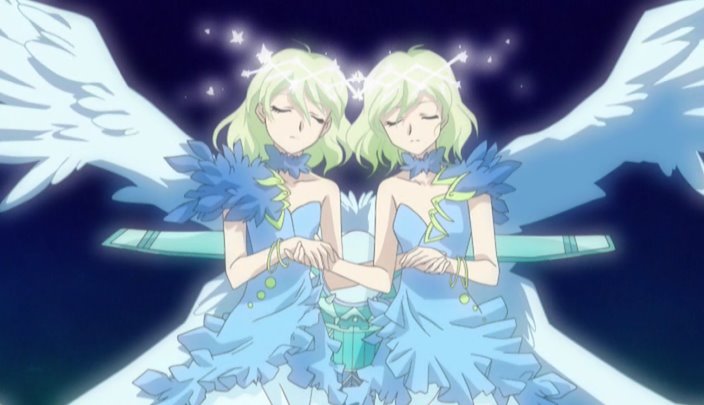 It turns out that these five girls are the mecha-musume personifications of the five combat aircraft in Yukikaze. They're named Sylphide, Super Sylph, Mave, One, and Two. There are also a couple more floating in orbit, who seem to be an early warning system. That's all they do.

They tell Rei that they're all in the world of imagination. They exist because fans believe in them. But when fans lose interest, and move on to other shows, they will vanish. For their particular show, that fate seems to be coming soon. And they're not too happy about it. 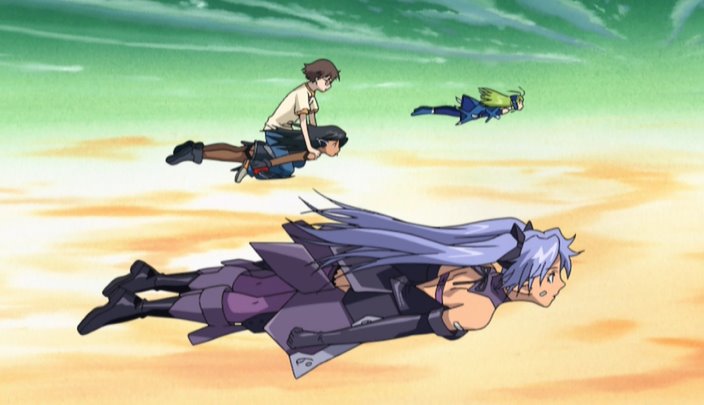 When there are great concentrations of fans, sometimes gateways open, and occasionally someone like Rei comes through. Once the con ends, the gateway closes, so they have to be fast if they want to get him home again. 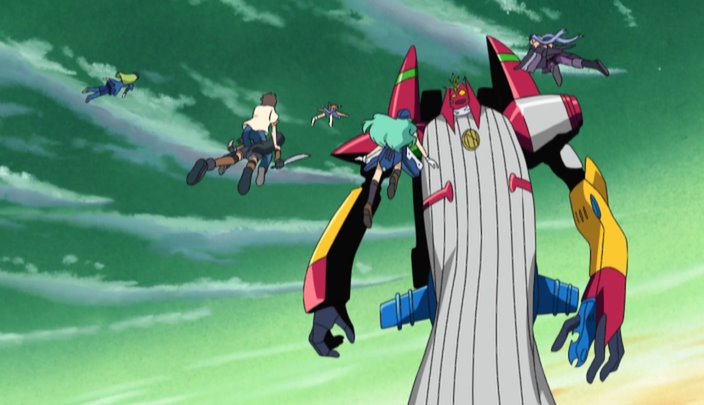 Unfortunately, there's a villain. His name is "The Forgetter"; he seems to be the non-moe non-tan personification of this oblivion. 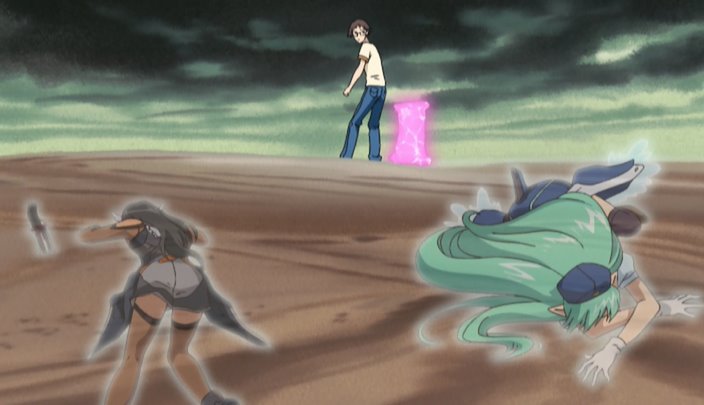 And using his power he makes all the girls start to fade out. The end is near. 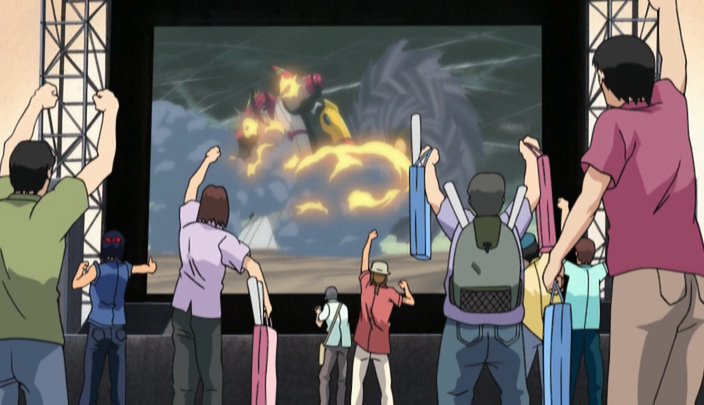 Of course, you know what's coming, right? I don't need to tell you. Rei tells them that he'll always remember them, and suddenly they all re-solidify, go up, and fight. And somehow or other a video stream of this, including his impassioned speech, shows up on TVs at the con and all over the country, and people watch it, and cheer.

You also know that Rei is too late. The gateway vanishes and he's stuck there until the next time there's a con.

I was amazed by the cast. Studio Fantasia doesn't skimp when it comes to hiring voice talent, but this cast seemed particularly noteworthy, so I wondered if they inherited the cast from Yukikaze. It turns out the answer is "no". The aircraft in that series don't have voices.

Rei's voice is the same as Hibiki in Vandread and he's really good in this.

The Forgetter has the same voice as Marchosias in Shana and he's brilliant, going full out.

Mave-chan's voice is the legendary Mizuki Nana. It's always a pleasure to run into her.

And almost all the other cast members are accomplished, too, but I don't want to beat this into the ground.

Instead, I want to transcribe a scene. The girls have rescued Rei and they're spending the night in a cave. The girls have just told Rei about how they'll fade out because fans will stop believing in them.

"I was in middle school the first time an anime stole my heart. I'd watched anime since I was in kindergarten, but it felt different to me that time. When I felt like my exams were backing me into a corner, I got so negative that I started hating myself. I couldn't look my parents in the eye anymore. I got to thinking that if I were to disappear, the world would never even notice."

(scene of him watching Stratos 4.)

"That was when I encountered that anime. I'd always stayed away from anime, because it was for kids or certain adults. But when I saw it, as I watched the characters flowing across my TV screen, trying their best, I suddenly found myself gripping my hand into a fist. That moment, in discovering that anime, I felt that I'd changed. Maybe I'd just found a trigger, but I realized something. I shouldn't just go on accepting things. I had to do something for myself! I know what it is clearly now. Sharing laughter is much better than hating each other. I love anime! Because it's given me strength! That's why I want you all to be strong, too!"

And there's a beat, and then Super Sylph says, "Thank you, Rei."

Now that's so awesomely stupid I can't believe it. I wonder how many takes were needed for him to get through it without breaking out laughing. I bet they had a blast writing it.

I particularly like that "certain adults". (I wonder how that was put in the original Japanese? Unfortunately, I couldn't pick it out. The sentence was too complicated for me.)

What it reminds me of is Ohya's inspirational speech in the second episode of Kirameki Project. Because it did the same thing to me. I laughed at them both -- but I liked the characters. That's a fine line, one difficult to achieve.

It's not too surprising to learn that a lot of the same people at Studio Fantasia worked on both shows.

Marchosias seiyuu going full out?  Now that I want to hear!  He's actually one of my favorite characters in that wretched show, just for what he puts up with from (and sometimes verbally does to) Marjorie Daw.

BTW, what happened to F/SN?  Overdose on it -- or on all the folks giving you not-quite spoilers?  (I watched it over about five days myself.  It's not an anime to mainline.)

2 I'll get back to it, but I wanted to try some of the other things I bought as well.

3 Mave-chan had virtually no sex in it. How's that a representation of fan's imaginations... even of adolescents?

7 I dunno. I thought it was just a little too manipulative to be really good.

I mean, c'mon. The basis of the show is "hey, look! Here are girls from a series you kind of like, but since you've gone on to liking other, better series instead, the girls you used to like will be doomed to a bleak, cold existence in a barren wasteland until they're brutally killed by a Getter Robo knockoff! But if you keep buying merchandise from this show, they'll be able to live on happily ever after..."

For what it was, it was quite well-done. I'm glad I saw it, but I watched a friend's copy at a con, and I don't have any real desire to buy it or see it again, even at that price.

8 Avatar, I thought that aspect of it was part of the joke.

Maybe it's just because I didn't watch Stratos 4 or Yukikaze.

10 If you had watched Stratos 4, I think you'd know that no one, not even the director, could think that watching the series could be a genuine life-changing event for someone. It just isn't that good. (It's good, but not that good.)

12 Sorry, let me explain. I read blogs, and see people hang onto all sorts of strange series they saw first. Rei is a fan with some experience, but it's not all that extensive. If he's just seen the typical fare daytime TV throws at viewer in Tokyo... and if what I saw of it was representative... Stratos 4 might've been a discovery for him. Gosh, I wanted Tsubasa to win so bad. But that was later. I remember my first viewing of a random ep of S4 in a tiny dealer video room at AX. All instruments were showing correct readings! SHOKKA! So I don't think the premise was unrealistic regarding Rei vs. S4.

13 I thought of Rescue me Mave-Chan as being a sort of extended version of the "every time you over-think a show, a catgirl dies. Think of the catgirls!" joke.

It really comes across as a self-aware Marty Stu, at least from your writing.

I am consistantly amazed at how you mange to ferret out the two-star material from the bargain bin.