First minute of the first episode of Fate/Stay Night has two people, one woman and one man, fighting with swords in the middle of a big fire. As they fight, they both do some screaming.

And you know what's scary? Just from the screams, I recognize both seiyuu, which from the credits means that I'm watching Saber fighting against Gilgamesh.

There's absolutely no doubt about it. The woman seiyuu is Kawasumi Ayako. Her screams of rage in this part sound exactly like Mahoro. And the man seiyuu is Seki Tomokazu, who I've heard screaming in many shows (e.g. Vandread.

They're two of my favorite seiyuu. Basically they're both in my top 5, along with Mizuki Nana, Kaneda Tomoko, and Chiba Saeko.

UPDATE: Then we have a girl, one I recognize but do not know the name of, standing in the middle of a magical circle. She casts a summoning spell, and finds that she's got Archer -- another character whose voice I recognize, and thus can identify from the credits. It's Oyamada-sensei, and it's Friagne. Oyamada is as good as a good guy can get. Friagne is as evil as a bad guy can be. Archer sounds, at least from his first few words, like he may be about half way in between.

And that's all before the OP runs in the first ep.

The OP is a good one. I don't think the music is very inspiring, but the visuals do a good job of presenting what the show is about -- or at least, what I hope the show will be about. Please, oh please, oh please, don't do a Shana on me! Don't descend into high school angst! (Yeah, I know there's gonna be some. Unavoidable.)

This show seems to have a superb cast. Looking over the credits, I see that Koyasu is in it, too.

UPDATE: OK, I'm rapidly becoming oriented here. The girl who summoned Archer is Rin, right? I didn't recognize her voice, but that's because I haven't seen a lot of things she's been in.

UPDATE: The voice of Issei seemed unreasonably restrained. I expected that voice to be coming from a wild man. So I looked him up, and it's no wonder I have that expectation. The same voice was Seiryo in Tenchi Muyo: GXP. I sure hope Issei isn't as nutso as that.

UPDATE: End of episode 1, and so far I really like what I'm seeing. Lots of potential here for good story telling.

Also lots of potential here for going completely off the rails, but I'm hopeful it won't happen. I really do hope this doesn't end up like Shakugan no Shana, with excellent potential terrifically wasted.

But since this isn't an open ended series, and since every non-spoiler review I can see is positive about it, it should be fine.

The main character, Shirou, doesn't push me away. He's been through a lot of hard times in his life, and yet he's also had some good things happen to him. And in general he's upbeat and pleasant; he doesn't dwell in the realm of self-pity. He has friends and he has a life.

He also has a magical ability which can be useful, but which also troubles him. He's clairvoyant, and he sometimes sees images of things that have happened elsewhere -- things that are not nice. Murders, fires, explosions, battle.

His friend Issei is an interesting one. I wonder how much he knows. From, the dialogue he's the son of a priest, and in a show like that that probably means he's got power, too.

And there's a mysterious blonde girl. 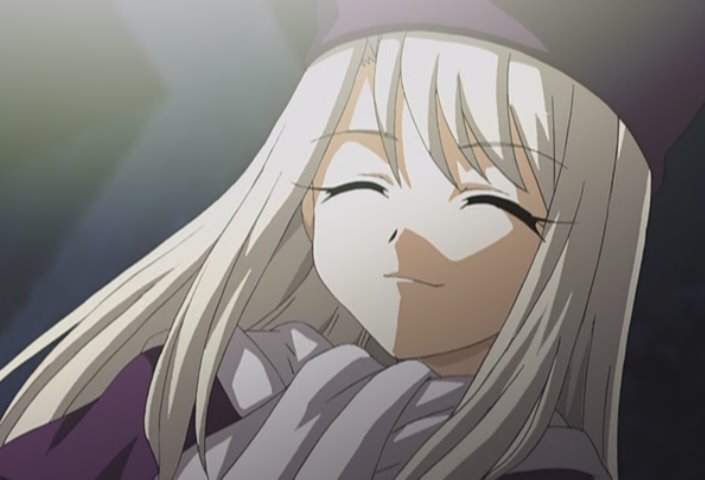 She creates a chance meeting on the street. As she walks by Shirou, she says, "You better summon yours soon, or you're gonna get killed, oniichan."

I'm intrigued. I'm interested. I hope I won't be disappointed.

UPDATE: End of ep 2, and I'm still hooked. Rin is interesting and complex. In principle she and Shirou are competitors, yet she seems to know him, and care about him. And she has a conscience.

I sense trouble coming. Eventually Shirou is going to learn that the battle that destroyed his town and left him an orphan included Saber. How will he respond when that time comes?

UPDATE: OK, end of ep 3. That one was kind of talky, but they had a lot of back story to fill in.

Shirou is still admirable. But the guy in the church? I hope he dies a horrible death before it's all over. What a creep.

Saber's summoning wasn't complete, and she's not at full power. She can't dematerialize the way the others can. I wonder if it's going to turn out to be an advantage? Somehow I have a feeling that they'll find a way to use it to their advantage.

Rin continues to be interesting. She's trying to be hard, but somehow I don't believe she's succeeding, deep inside. She has the power and skill to do this, but it seems as if she's not ruthless enough.

UPDATE: Half way through ep 4, and it's speculation time.

1 I'm dying to know if you can survive the contact with the male lead, Shirow. I thought he was... not as useless as I was afraid he would

Yes, it's Rin who summons Archer.

He seems OK to me. No problem with him so far.

Revealed so far: he was the sole survivor of the town which was destroyed in that fight at the beginning. He was adopted by a man who owned a traditional samurai manor. That man has since died, and Shirou inherited everything.  He's in high school. There's a girl that's younger than him, name of Sakura, who's sweet on him but he doesn't know it. He has magical powers and knows how to use them, but for the moment he's a sensor and that's all.

Considering what he's been through, he seems reasonably well adjusted and happy.

He gets a great deal of satisfaction out of repairing electrical appliances, which is something that his magic aids him with.

Given who he was raised by, and where, I'm assuming he's trained in some sort of combat art, most likely kendo.

3 I don't see why the drama. Emiya obviously knows (by the time) that Servants do as they are told. The blame for Saber's actions lies with the previous master.

4 Yeah, I now know I was wrong about that.

5 I think I'm going to enjoy your reactions and speculations almost as much as I enjoyed the show.

Personally, I loved this show.  After watching it and doing some research on the game, I really would have preferred one of the other story arcs though.

There is drama, but it isn't the kind that I'm used to from your standard harem show.  I think that made it more acceptable for me.  Of course, it helped that I found the setting quite interesting, and pretty much loved all the characters.

Yeah, the grail story kind of goes off kilter a bit near the end, but I really considered that secondary to what was really going on.  Because of that I was less negatively affected by the ending than I might have been.  It seemed to fit.  It satisfied.

Bigger It wasn't exactly happy though.  Which is one of the main reasons I would have preferred one of the other arcs.  In addition to seeing more of my two favorite supporting characters.

6 {On second thought... Although I'm not telling who she is, let's bracket it into tags.}
I am surprised how close you are in your call on Saber's original identity, although technically it's a miss. I really had no clue that she was an actual medieval hero (I thought the Servants had to be, you know, more legendary -- so you cannot summon a historical figure like Joan d'Arc or Alexander Nevsky for instance). How did you guess?

I'm not going to get into spoilers except in highly general ways, but I think you will enjoy this show. It does not get into typical high-school angst at all; there is some, but it's adult angst.  You'll understand my meaning when you get there.

The whacky harem elements don't show up often, but they do appear, seeming somewhat out of place   Ok, one show spoiler -- by the time it's really rolling, he has three girls living with him.

I'd probably rate this show in the top 5 or so anime that I've seen, definately in the top 10.

And you're right; Rin's not ruthless enough.  She and Shirou are fundamentally alike in their attitudes WRT the War of the Grail; Shirou is just more passionate about it.  (Hmmm. Rin in her schoolgirl outfit, or Sakura in her leather? Decisions, decisions....)

As for Archer... he's my favorite character of the series.

8 There are a few comments I want to make, but I'll save most for when you've finished.

Right now, I'll just point out that the music was one high point out of many.

9 I read the wiki for the other arcs a bit after watching the series, and I can agree that some of the other arcs might have been more interesting, although this one probably works better to satisfy the most fans.

I came into the series cold with no knowledge of characters, etc, so of course I didn't identify the combatants in the prologue.  I suspect that you're having done so will ruin some of the surprise later in the series.  As has already been mentioned, it doesn't cause the stress on Emiya that you would expect at this point, because by that time he has bigger stresses to worry about, I won't even go into spoiler territory on it.

On the incomplete summoning of Saber, it certainly is used as a plot element, though more as a disadvantage, as you'll already have figured out by this point.  From what I've read, the culmination scene of that little element was a bit juicier than what they give us in the anime.

On the music, when I first watched it I'd just put in the disc when I got called off to do something in the next room over, so I had the intro theme cycling for like 45 minutes in the background from the menu before I ever watched the first episode.  I had the soundtrack ordered even before I finished the first disc, and I haven't regretted it, even at import prices.

10 I saw some kinda animeblogger, but with musical inclinations, parsing and panning Anata ga Ita Mori. A classic example of how being an expert works against you.

Yeah, I would have guessed that was Saber's real name too.  One of my friends did guess that.

Suffice to say that Type-Moon (Creator of Fate/Stay Night and Tsukihime.) does very creative twists in writing their storylines (Or Kinoko Nasu does, since Takashi Takuichi handles the artwork side of things for Type-Moon.).

The anime is toned down slightly from the game, but you will see portions of its roots come through.  If you ever seen some of the printed material that has been released for the original game, you will know what I am saying.