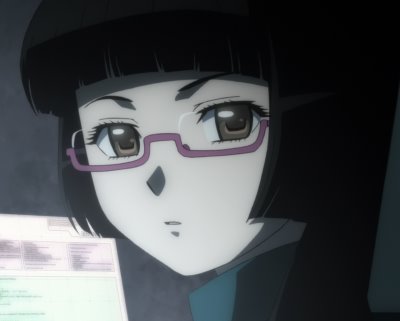 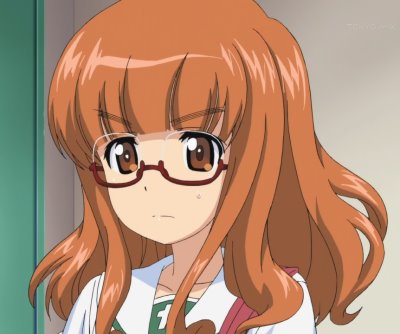 Three different universes, but they all go to the same optician.

1 Madoka (from K-ON) is the excessively capable straight woman who holds the whole school together, it seems. I may try to find other examples.

2 Here's a brief list of Rob Kelk's classics (wasn't updated in a while - none of the above 3 is on it): Kanna Togakushi, Haruna Saotome, Mai Momoi, Chiffon. A few are inexact fit, too.

3 I'd forgotten about that one from Happy Lesson. She has the same red half-rims.

It does seem to be the thing.
Note that, unlike a lot of such anime fashions, it works quite well IRL. A female friend of mine from Cote' d'Ivoire has worn them for years.

The K-On girl's name is Nodoka Manabe, not Madoka.  Though Homura Akemi from Madoka (PMMM) wears red half-rims just like these.  And they're enough of a thing that Peter sells them.

I think glasses like these are popular in anime simply because they don't cover the character's eyes, unless viewed from a very low angle.

The same reason meganekko, when viewed in profile, often have an invisible gap left in the glasses' bow so the eye remains uncovered.  I thought that was a (TV) trope, but I couldn't find a page for it.

6 The "cut out glasses so eyes show in profile" thing is actually more of something I believe J.C. Staff decided to do a few years ago and it's carried through the industry.  But there's a reason for that: Eyes are animated last.

When it comes to anime character designs, it's the Hair and Eyes that dictate everything, so glasses are one of those additions that gives a design more character.   And, well, the "glasses = smart" bit is pretty cross-cultural these days.

7 Brickmuppet, I thought you knew about the meganekko site.

8 Even better, I am one of the acknowledged contributors.

And, well, the "glasses = smart" bit is pretty cross-cultural these days.

And a good thing too.  I seem much more intelligent in person (where my glasses can be seen) than I do online.  Trust me...

From an attractiveness standpoint, the upper frame looks a bit like a perpetual scowl, which is decidedly masculine.  Doesn't look all that good on women necessarily, unless they have a very feminine face to offset it.