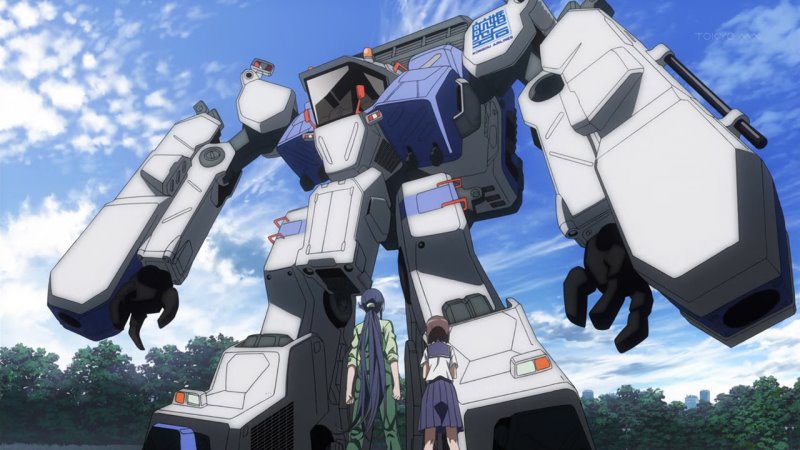 1 Had to google that one.

2 It's from the final episode of Railgun S.

4
I am sad that we have not yet found a way to create giant bipedal robots.

5 You trying to pull my chain, or something?

6 Yeah, you can't discuss engineering impossibilities here!  This is a cheesecake thread!

Admittedly, some slightly-strange cheesecake, posted on a particular day set aside for such things.  Though this has some of the normal kind of cheesecake if you're a back-of-the-knee kinda guy.

7
Nope. The statement was said with full sincerity.  (Though, I may have missed another context for the picture considering the date it was posted on. )

Too many words about why mechas are stupid

I realized later that I left out a big one: ground pressure. The weight-per-square-meter for most of them exceeds the load-bearing ability of normal ground, and they'd sink up to their knees.

Having one of them walk would be like one of us walking in foot-deep mud.

9 The flip side of ground pressure is friability.

Moving on your feet transmits forces to the ground by friction. If the ground isn't strong enough, the forces tear it up. Then you get into slip and slide.

Think running on thin layer of grass soaked by rain.

Something moving like a human, built at human ratios at a larger scale will destroy more of the surroundings by moving the larger and heavier it is.

They have made giant bipedal machines, but they would be lousy for weapons systems, and maintenance would likely be prohibitive.

I like mecha, even if I know that they are stupid and physically nonsense. I am grateful to Steven for the image.

10 Ekaterina IIs was cool, even so. Saten was the main pilot, for one thing. And it got expended at the end to stop the Missile Of Doom.

11 Just redefine the gravitational constant of the universe.  You're the expert, aren't you?

Just redefine the gravitational constant of the universe.  You're the expert, aren't you?

I thought that was the responsibility of the guy who lower the seas and heal the world, and make unicorns appear.

I still remember how Battletech would go on and on in how the BattleMech was the most powerful, capable, efficient, and useful weapon ever made - and then say, in one of the modules, how Inner Sphere (The Good and Bad and Gray guys in the game.) overwhelm the Clans' (The slightly less Good and Slight more Bad and same Gray guys in the game.) entire military simply by conventional forces alone.  Even FASA could see how it would not work (And at least GDW knew better than to put mechas in most of their games.).

By the way, which title provide the last screencap in the article?

13 I'll give you one suggestion:  don't try to figure it out by googling "mecha with tits."

15 Another thing that was nice about Ekaterina IIs is that they don't try to pretend they can give it functioning legs. It runs around on wheels, and fights its battle on pavement in a parking lot. And the base of it is very long and wide, for balance.

16 I thought that was the responsibility of the guy who lower the seas and heal the world, and make unicorns appear.