I used to have an album of music performed by a pipe organ along with a brass choir. (It was awesome.) The liner notes talked about something I hadn't known: there's a significant delay between when the organist presses a key and when the sound comes out. When the organist is playing alone, they learn to ignore that delay and not be confused by it. But when an organist is playing along with other musicians with other, faster responding, instruments, the organist has to play a bit ahead of everyone else so that the sound he's making synchronizes.

I gather it's rather challenging.

Where is the voice box on a giraffe? If it's like other mammals, it's at the top of the lungs. Giraffes don't speak, and don't have to coordinate too well, but there's a pretty long distance from the brain to the voice box, and a time delay for the sound to make it back up to the head. If giraffe's could speak, it would be something of a challenge, don't you think?

Or if you're a monstrous dragon, like this one: 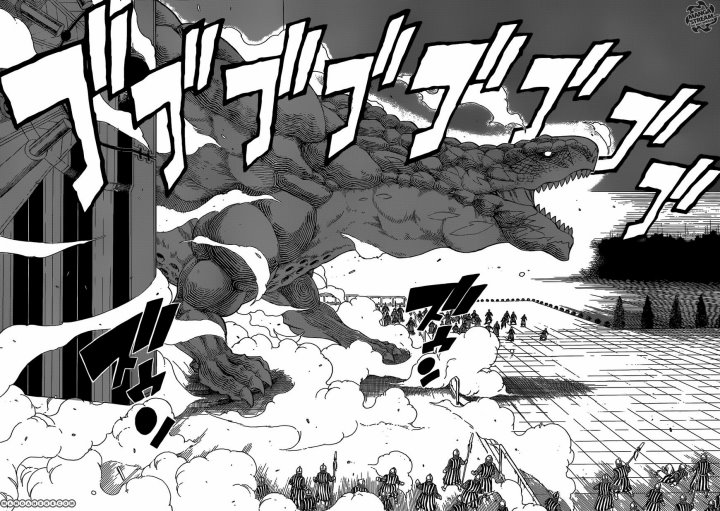 Now he can talk. But he's big enough so that nerve impulses would take a noticeably long time to travel from brain to voice box, and the sound would take quite a while to return to the head. Modulating it in order to speak would be quite a challenge, if you wanted to talk as fast as one of the puny humans that are smaller than his toes.

High speed nerves conduct signals about 100 meters per second, and it's easily 50 meters from his head to his voice box. When it comes to speech, half a second is a long time.

UPDATE: Of course, the response is, "Dragons are magical creatures. Normal rules don't apply to them." Which is a cop out.

1 I saw a documentary not long ago which stated that it takes human beings longer to process and respond to some of our senses than others.  The example given was that our brains could react quicker to a sound than it could to an image flashed on a screen.

If both stimuli came from the same source (such as sound and images in a video game), the brain would delay processing of the sounds so that they synced with the images.  In the documentary, they started slowly desyncing the sounds and images in the game, and the players didn't notice until they were off by almost a full second.

2 [handwave]They breathe with lungs in their chest, but speak from a gas bladder in their throat.  Maybe the one that lets them breathe fire; that should be a pretty fast reflex, too.  (And if they really need to billow it out, their lungs can catch up and take over before the gas bladder empties.)  I'm sure there's at least one anime dragon out there who tells the hero he's about to roast while he's inhaling for a big breath, which would require something like this.[/handwave]

Re: brains fixing lip-flap delay for you on TV.... I read about a study with a computer game.

Step 1: get people to play normally

Step 2: add delay, wait for people to adjust to delay

Step 3: remove delay, ask the players about the game's behavior.

"It was precognitive; the game reacted before I hit the controls!"

I think it was a study related to a type of schizophrenia brought on by non-standard delay processing in the brain.  The sort that made people who saw a Coke commercial and thought about having a Coke believe that the commercial came on in response to their thirst, because their brains got the temporal ordering wrong.  (Making them believe the TV was reading their mind, or that they had psychic abilities.)

(And I forgot to add the paragraph that kept the second half on-topic...)

...perhaps the "magic" is just a little temporal illusion like this, to make the humans not notice how long it takes the dragon to respond?  We, natively, can fix a 100ms delay between sight and sound; hiding a half-second here and there should be easy.

4 Their speech is much, much slower too, and probably at subsonic frequencies.

It probably takes a full minute for them to say "Oh, Sorry, was that your house?"

5 I remember some shows and  cartoons where the great creature/monster would talk in a very slow and echoing manner, even when they weren't moving their lips/whatever; probably they didn't knew or figured this aspect consciously but somehow thought it made sense on a gut level (or just thought it made a better impression this way). Don't see that much nowadays though.

6 You're assuming that his nerves are working with the same biological methods of yours (and other terrestrial life).

Let's come at it from the other direction - if we were designing a huge monster, and trying to fix this problem, how would we go about it? The answer's pretty easy if you think about it.

The reason human-and-other-animal nerves transmit at the speed they do is because that's the speed that the electrical/chemical reaction propagates. The neuron at the head of the signal fires, the electrical signal causes a chemical change in the next neuron, which causes its electrical impulse to fire, which causes a chemical change in the next neuron up the line, etc. Each chemical/electrical impulse takes time - not a lot of time, but each one is covering only a few microns, so the delay adds up.

So what are our alternatives? Well, when it comes to carrying an electrical signal over a distance, we've found that using conductive materials is effective. Hard for biological stuff to work with, to be sure, but we're talking a big fire-breathin' dragon here - obviously he's got other exotica in his construction and we can hand-wave that difficulty away. So, instead of neuron firing on neuron, neurons stimulate a metal conductor, which carries the signal further along. Wrap 'em with a natural insulator (we wrap nerves, this is a solved problem) and we're good to go.

There are difficulties with this method. You can't bundle a bunch of wires carrying low currents with sensitive receptors on each end, because you have to worry about the signals inducting into the other channels. But you can solve this by spacing them apart some - there's a lot of room available in this guy's limbs. And at the end of the day, we don't need a lot of nerve density for sensitivity for something that's covered in scaly armor plate...

The second difficulty is flexibility. You don't want your signal conductors bending, because they'll eventually snap. We can get around this problem by embedding the conductor-nerves in the skeletal structure, which is (a) rigid and (b) already running most of the distance that we need to cover with the signals. So the question becomes how to conduct across the joints. There's no real reason you couldn't do this with conventional neurons, really - the amount of distance covered in the joints wouldn't be negligible, but it would be a lot shorter than a straight neuron run would be. Might not be human reaction times, but probably close enough for government work.

And, in a way, this actually helps us some, because the other thing we'd have to worry about is resistance losses. We can't just run a wire all the way from the brain to the tip of the tail and expect a brain-neuron to fire a signal that would travel that far. Having it broken down into sections of wire and of neuron means we have repeater stations, each of which can retransmit the signal, meaning we can use a lower strength (and thus reducing the induction problem).

The main problem that our wired-dragon would have, then, is that bones are nerves - bone damage would almost certainly also inflict some nerve damage, and any major break would probably result in at least temporary paralysis of the affected limb. But LOOKIT that thing. It's huge, and obviously the bones have to be made out of something stronger than human or animal bone in order for it to exist at all... and any major bone break would probably prevent it from using the affected limb in the first place, just to prevent shear-tearing it off from its own weight.

It'd be pretty fiendishly difficult to engineer one, to be sure.

9 I have taken all nerd-dom to be my province. ;p

10 Actually, are you sure it speaks?  I say this because I've seen a couple of settings where dragons cheat, and use telepathy.  You *think* they speak, and in your language too, but its actually all in the mind.

Granted, that is just a variation on "a wizard did it."