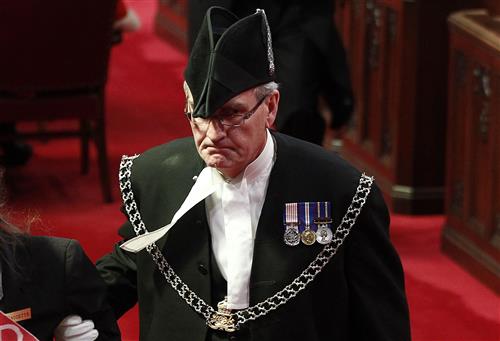 This grayhair is Kevin Vickers, Sergeant at Arms for the Canadian House of Commons. A gunman penetrated the Parliament building today, and Vickers shot him dead.

Good job, sir! He seems to take the "at arms" part of his title seriously!

UPDATE: He was in the RCMP for 29 years, so presumably he's been trained to shoot. I wonder what he used? Is a pistol part of his standard uniform? (Or a shoulder holster under that coat?)

UPDATE: Next day, Vickers received a standing ovation from Parliament.

1 He looks tough as nails in that photo, despite the big hat.  Maybe he stopped the attacker with a withering glare...

2 He had a handgun in his desk.