Actually, I think I was expecting this, in a way. Episode 13 is the return of Ai, the little girl from the first episode. And she wants to meet all the people that Akari has been telling her about in the emails all through the show.

The comic hook for the episode is that Akari has been brutally frank about everyone in those emails, and Ai is going to say things that Akari will find embarrassing. I can't wait for the meetings with Aika and Akira! (I'm about five minutes in as I write this.)

UPDATE: What is Negi doing on Aqua? 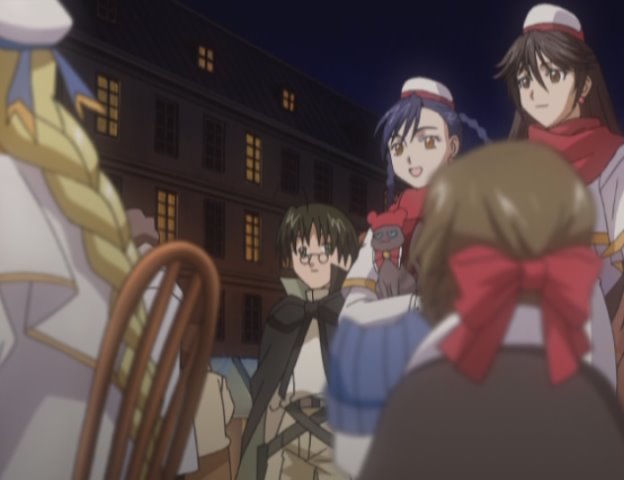 UPDATE: And now it's over. I've got a lot to say about it, but I'm not going to express an opinion right now, because I need to write my review. Probably tomorrow.

I will say this: this is one of the best things I've ever watched.

UPDATE: I've got my review written, but I can't post it until I take some frame grabs, so it'll probably be tomorrow.

One of the standard slots in my review format is "genre", and I had to think a moment. I ended up going with "coming of age".

Episode 12 is my favorite of the series. In some ways the grounds for it were laid with episode 4. Partly because of Akari's experience delivering that sound card to, it turned out, a cemetery out in the ocean, she realized that time was a little slippery. So she wasn't totally blown away when she finally realized she had gone into her past in ep 12.

And it happened again, just a bit, in ep 13 and Ai went with her. The cats obviously have some mysterious power. (Yes, I've read about the cait sith in Wikipedia.) But is it the case that Akari is the only one sensitive to it?

Akari told Ai about both ep 4 and ep 12 in email, but it's not clear whether she told Alicia about ep 12. And it's highly unlikely that she told anyone else.

I dunno. Probably not. No transformation decks, no sentai team constumes, no called energy attacks, no super villains, and no mysterious masked romantic complication carrying a red rose. I guess it can't be mahou shoujo after all.

Besides which, "Sailor Manhome" just doesn't have the charisma, does it?

1 I will say this: this is one of the best things I've ever watched.

And this is the weakest season of the three.  Chew on THAT for a while.