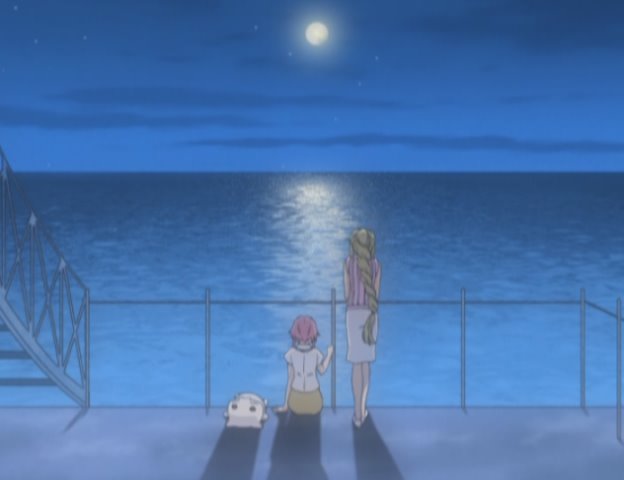 I don't think that Phobos or Deimos look anything like that.

Just did some calculations. At its closest approach, when directly overhead, Phobos has a disc of 0.2 degrees. From earth, Luna is a disk of about 0.5 degrees.

But because Phobos has a smaller orbit, then when it's on the horizon its disk would be about 0.15 degrees, or about one eleventh the area. Visible? Yeah. But it wouldn't look like that image.

And since its orbital period is only 7 hours, it would visibly move.

OK, Steve, put down that slide rule and back away slowly...

UPDATE: Not only would Phobos have only 1/11th of the apparent disc, but illumination by the sun would be 43% as bright on average, which means as a night-sky light illuminating things on the ground, Phobos would only cast 4% of the amount of light that Luna does on "Manhome" when full.

1 Cosmetic astrography?  "Don't like the look of your moon?  Terraform one planet with our services, and get a free moon upgrade!"

2 I felt a disturbance... as if millions of catgirls cried out, and were silenced.

5 Actually, I think Metaphysician may have it right. Perhaps there had to be some serious demolition work on the planet when they first began the terraforming project, and they knocked away enough mass into orbit to create a reasonable moon, one that is much larger than Phobos. (In fact, that's how Luna was created, though not as a result of technology.)

6 I like that answer. My policy, even as a nit-picking engineer, is always to try to look for the explanation that makes sense.

7 Well, if they were using asteroid impacts for some of the early excavation, then maybe they collected a few extra asteroids into the same orbit and let them coalesce into a larger body.