So I'm trying to give Ai Yori Aoshi another chance, by picking up where I left off last time. It's the beginning of ep 3, and Miyabi is being introduced. Turns out she has the same voice as Konoe in Hanaukyo Maid Team La Verite but I bet she doesn't turn out to be as interesting and sympathetic a character.

And so we get the staple of inept romantic comedies: the sequence of innocent mistakes which result in an utterly compromising position between the guy and one of the girls just as someone discovers them together. In this case, Kaoru is naked, he's kneeling over Aoi who is wearing a kimono and his hands are on her breasts. Miyabi hits him hard enough to knock him into next week.

This is not an auspicious restart, but I figure I have to stick with it this time until the rooming house is open and Tina has moved into it. If I'm still having "yuck" reactions at that point, then I'll know this series is not for me. (Even if it does have Kawasumi Ayako in it.)

UPDATE: She really is a traditional girl, isn't she? 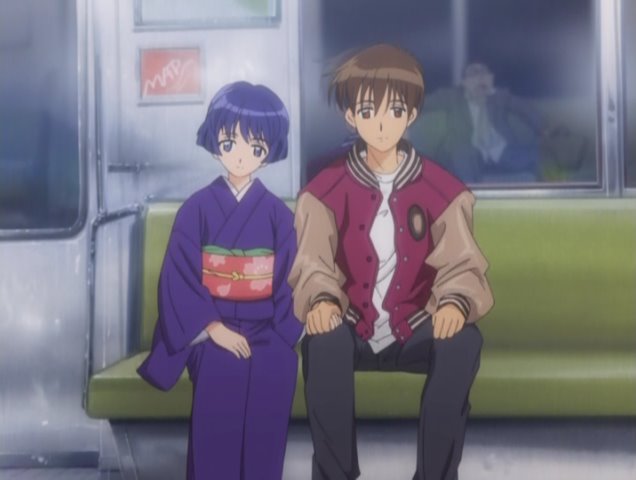 I understand the "yamato nadeshiko" esthetic intellectually, but it's still hard for a liberalized westerner to feel comfortable with it.

This series is from J.C. Staff, so I really do want to give it a chance to prove itself. I won't say everything they've ever done was a home run, but they've got a high batting average.

UPDATE: Ep 4, and J.C. Staff does naked, or nearly naked, girls really well. Yikes! For an old fashioned girl like Aoi, she sure does get featured in a lot of fan service.

UPDATE: Well, I have no idea how the Miyabi character will evolve as the series continues, but she sure is a cold bitch to begin with. 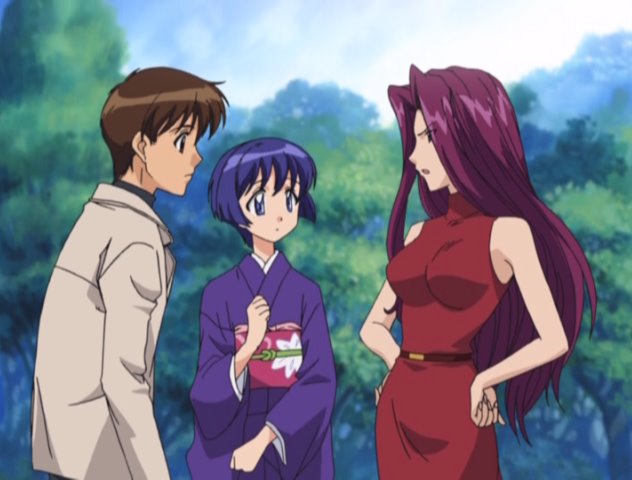 Konoe started out that way, too. I wonder if that kind of character is one that this seiyuu is typecast into? She was also Melinda in Someday's Dreamers and Yukari in Azumanga Daioh. Melinda is another one who started cold and became warm. Yukari, on the other hand, is nuts at the beginning and still nuts at the end of AD.

1 I suppose I am not westernized enough, so I cannot fathom what you're being uncomfortable about.

You didn't become a young man in the 1970's in America, I presume. This was the height of the "Women's Liberation Movement" when it was most widespread, most militant, and had its most credibility. (Ten years later it rather imploded and then fragmented.)

It was a thought crime to think of a woman becoming a home-maker. (Part of the later backlash was due to some women saying, "But what if I want to be a homemaker?") The idea of any woman dedicating her entire life to one man, and making him the center of her existence -- well, that approached blasphemy.

3 I was constantly amused by the way Aoi's breasts magically disappear when she puts on a kimono. I guess even as much as they like their big breasts, the animators just couldn't handle her looking like a bipedal umbrella.

4 Heh.  I was going to make the same observation.

5 Miyabi is the prize. Taeko is the runner-up, and would take the lead if her self-confidence ever caught up to her bustline.

Aoi is... damaged. I picture an alternate first episode where she shows up at Kaoru's apartment and finds him with a beer in one hand and a naked Tina in the other. The next day, the police arrive and attempt to identify the finely-minced body parts. The series then follows loyal retainer Miyabi's search for her missing Lady.

6 Kaoru's been emotionally damaged as well; it's just that he was repaired (more or less) before the start of the story. I believe Ai Yori Aoshi is basically the story of how Aoi recovers from the damage her family did to her. This is one reason I think the whole "harem" aspect of the show actually serves the story - Aoi badly needs functional and happy relationships outside of Whipmaster-Miyabi and LordAndMaster-Kaoru so she can develop some emotional maturity. And both of them need the time to fall in love with each other. For Kaoru this is obvious but it is true even for Aoi, because what she's feeling at the start of the series isn't love but desperation, and it is this combination of desperation and tradition that is both pitiful and offputting to western eyes.

Very good.  I like it.  The other main characters (Chika excepted) are lonely and looking for a family and a home, and Aoi gives them that.  So each side gets something of real value from the situation.