It's been a while since I've put in an order with RACS. I've been accumulating a list of guilt buys, things I would get when something came past which I really wanted.

And on Friday it happened. They have a statuette of Hinako, from Isshoni Suriipingu. I don't buy standing figurines any more because I've had a couple of  them break, but Hinako is kneeling. Hinako is also... well, she's Hinako. 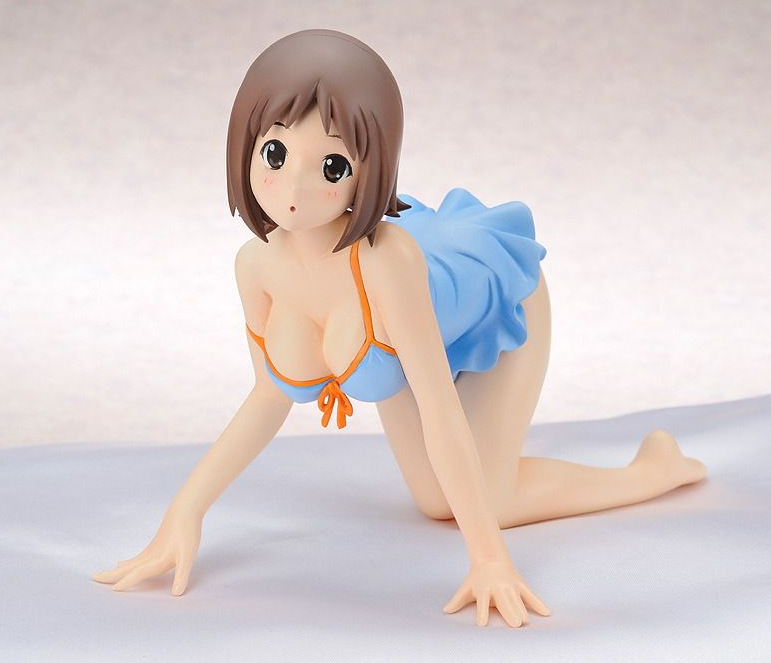 So I also ran my guilt-buy list (including the Summer Wars BD), and since I need some shirts I ordered three.

And in the "just for the hell of it" category, I ordered a copy of the "Cosplay Fetish Academy" game. This will actually be the first game of that kind I've ever gotten, and I really am not sure if it's something I'll be glad I got. But I guess I'll find out.

1 From the desc., Cosplay Fetish Academy sounds hot-or-miss. But it doesn't seem to have any violence or coercion. If you're still looking for games with animated sequences after your choices, a translation of School Days has been announced. Yes, it has bad ends, but the idea is too avoid them.

2 I can't see myself becoming a regular player of these kinds of games. I just can't. And likely I'll only mess with this one for half an hour, maybe less.

3 How about if there was a combination of a strategy game like Master of Magic and a dating sim? Sakura Wars already does battle/dating sim.

Actually, Sakura Wars is more like a combination of a dating sim with X-COM.

I think the problem for me would be that you have to be careful with your soldiers, and never never lose any of them. It isn't possible to fight and win a war without casualties, but in Sakura Wars that's the goal.

In MOM I don't waste units, but sometimes it's necessary to accept losses. Yesterday I took out a node that had been spawning wandering monsters, which had two spellbooks inside. I took a pile of 9 elite wizards in and lost one of them. But it was worth it.

6 Casualties in Sakura Wars aren't that bad. The girls survive (they're in a big ol' robot, after all), they just withdraw after taking a certain amount of punishment. There's a pretty big ding in their liking-Ohgami meter, so that's your disincentive. Still, I made a point to kill off Iris more than a few times...

7 I could understand wanting to ice Sumire, but Iris? What you got against Iris?

8 My brat tolerance is VERY low. And I couldn't usually afford to take it out on her in combat because, like it or not, she's your healer. So when I had the opportunity, I was sure to take it. ^^

9 I guess for dating-sim fans, conquering a girl gives the same satisfaction as taking out a node in MoM or colonizing a planet in MoO. If you want more characterization and storytelling, VNs are probably better.

10 There are 4: Ariel (all white magic), Sharee (black and red magic), Kali (blue and black magic) and Freya (all green).